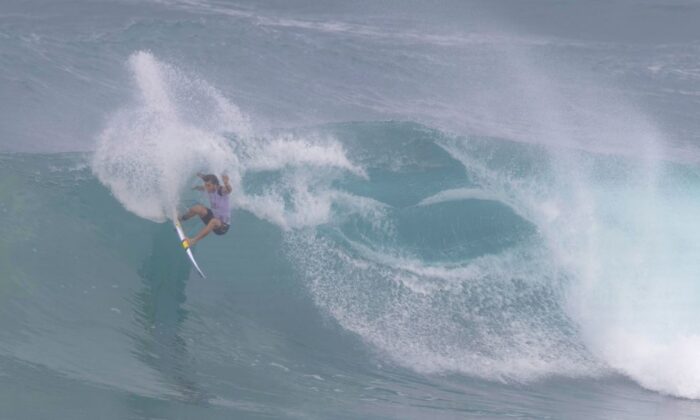 Hawaii's Imaikalani deVault wins his first heat and moves on to the 2nd round of the Hurley Pro at Sunset Beach on the North shore of Oahu, February 15, 2022. (Photo by BRIAN BIELMANN/AFP via Getty Images)
Australia

The Men’s Hurley Pro Sunset Beach Championship Tour surfing event has begun, with unruly sets in the 10′ to 14′ face range arriving at the iconic break on O’ahu’s North Shore on Tuesday.

The event, covered by World Surf League (WSL), had been put on hold for four days due to relatively small surf.

In the first two heats, South African Jordy Smith and Japan’s Kanoa Igarashi looked confident in the unpredictable conditions, Igarashi scoring 15.33 for his best two waves, and both making it through to the next round.

In Igarashi’s heat, Brazilian Caio Ibelli, who finished equal third at Pipeline, didn’t make the top two and had to surf the elimination round. However, he won that heat convincingly to qualify for the round of 32.

In the upset of the day, 11-time world champion, Kelly Slater, who had just come off the back of a win at Pipeline, finished third in his heat, but fortunately scraped through the elimination round to stay in the competition.

That elimination heat was particularly tight, with South Africa’s Matt McGillivray scoring 13.57 to pip Slater (13.00), who in turn narrowly edged out Hawaiian Koa Smith (12.77), who is now out of the event.

Like Slater, runner up at Pipeline, Seth Moniz, was also forced to surf the elimination round, narrowly defeating Miguel Pupo of Brazil to enter the next round.

Huge clean-up sets rolled through during that heat, with surfers having to bail their boards, and jet ski operators doing a superb job to get competitors out of the impact zone.

In heat 5, Hawaiian Ezekiel Lau came out just ahead of former world champ Brazilian Italo Ferreira, leaving big wave champion and wildcard Billy Kemper of Hawaii battling it out in the elimination round.

Kemper lifted in that heat, winning convincingly over Australia’s Morgan Cibilic and Olympic bronze medalist Owen Wright, who has been eliminated.

Kemper has made a miraculous return to professional surfing after suffering life-threatening injuries, including a broken pelvis,  following a heavy wipeout on a reef in Morocco in February 2020.

Heat 7 saw the score of the day when Hawaiian Imaikalani deVault laid down some beautiful rail work, followed by a critical lipline float on the end section to pull an 8.93.

Two-time world champ Hawaiian John John Florence, as well as U.S. surfers Jake Marshall, Kolohe Andino, and Nat Young all looked strong in the opening round, as did Australians Jackson Baker, Ethan Ewing, and Jack Robinson, all making it through to the round of 32.

The women’s event is still on hold, with the next call to be made on Wednesday, Hawaiian time. Waves permitting, the men’s round of 32 will also commence on Wednesday.