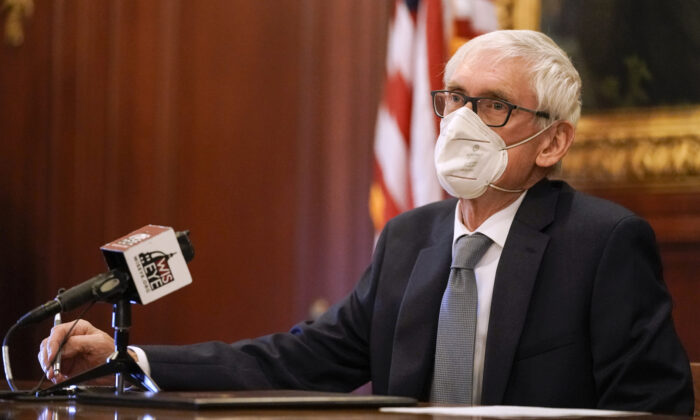 Wisconsin Gov. Tony Evers, a member of Wisconsin's Electoral College, casts his vote for the presidential election at the state Capitol in Madison, Wis., on Dec. 14, 2020. (Morry Gash-Pool/Getty Images)
Judiciary

The Supreme Court will not take up an appeal from a conservative think tank over Wisconsin Gov. Tony Evers’s decision to exclude the organization from his invite-only press events.

The high court’s decision, which was issued Monday without comment, will uphold lower court rulings that found it lawful for the Democrat to pick and choose who gets to attend some of his news conferences.

The lawsuit was filed in 2019 by John K. MacIver Institute for Public Policy, a Madison-based think tank advocating for a free-market and limited-government capitalism. According to the Institute, journalists working for its new arm were denied access to a briefing that previewed the first budget Evers proposed as governor, as well as other press events during which important public issues were discussed.

“The Evers administration’s actions violate the journalists’ constitutional right to free speech, freedom of the press and equal access,” the Institute said in 2019 when accounting the lawsuit. “While no press outlet has a constitutional right to an exclusive interview or off-the-record tidbit, government officials may not target certain journalists that they disfavor for discriminatory treatment.”

U.S. District Judge James Peterson, an Obama appointee, in March 2020 disagreed with the Institute’s arguments, saying that journalists can still report on the governor’s policies without physically attending his press briefings. The ruling was upheld this April by the U.S. State Court of Appeals for the 7th Circuit.

“We find that the Governor’s media-access criteria are indeed reasonable and not an effort to suppress MacIver’s expression because of its viewpoint,” a three-judge panel on the 7th Circuit, consisted of a Reagan appointee, a George H. W. Bush appointee, and a Trump appointee, wrote in their opinion (pdf).

The circuit judges also found that Evers didn’t engage in ideological discrimination, since his media invitation list included conservative leaning outlets such as the Washington Times, The Wall Street Journal, Fox News, and the Washington Examiner, as well as liberal leaning ones like the Capitol Times, The New York Times, and HuffPost.

“The inclusion of a broad range of media outlets on both sides of the political spectrum certainly diminishes any claim that the list is based on political ideology,” they wrote.

The Institute is represented by the Liberty Justice Center, a public interest law firm based in Chicago, Illinois.

“As this case ends, two things remain clear: the MacIver News Service is run by award-winning journalists, and politicians should not censor their news coverage by hand-picking who covers them,” said Daniel Suhr, managing attorney at the Liberty Justice Center, reported Milwaukee Journal Sentinel.