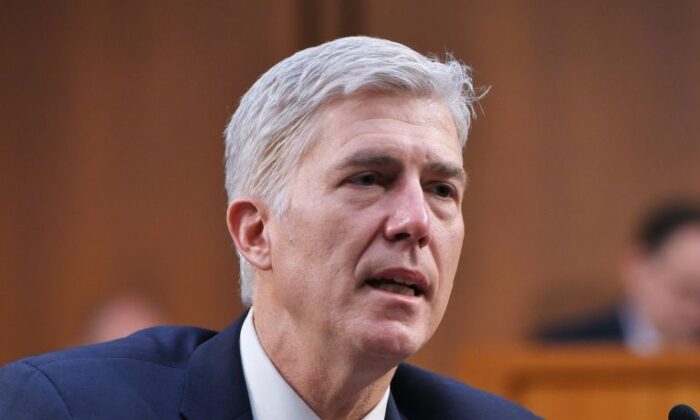 Neil Gorsuch during a hearing in the Hart Senate Office Building in Washington on March 22, 2017. (MANDEL NGAN/AFP/Getty Images)
Judiciary

The Supreme Court refused a request on Sept. 8 by a Sunoco business unit to halt enforcement of a $155 million class-action judgment for unpaid interest on late payments for crude oil while it decides whether it should hear the company’s appeal of the verdict.

The justices are scheduled to consider the appeal on Sept. 28.

The denial was issued by Justice Neil Gorsuch, who oversees emergency applications from Oklahoma and five other states within the 10th Circuit of the U.S. Court of Appeals. Gorsuch provided no reasons for his decision in the case known as Sunoco Partners Marketing and Terminals L.P. v. Cline, court file 22A188.

The Sunoco unit asked (pdf) for the special relief Aug. 29, pleading that it had no “realistic prospect that it could recover” the funds after they were distributed to the “more than 53,000 class members.” The company also said it needed the stay because there wasn’t “any prospect that the Tenth Circuit will address the merits of this nine-figure damages award before execution proceeds.”

The lawsuit began in 2017 when farmer Perry Cline sued for himself and other well owners from whom the Sunoco unit bought crude oil.

U.S. District Judge John Gibney ruled in 2020 that the company ran afoul of the Oklahoma Production Revenue Standards Act by not paying interest on more than 1.5 million late royalty payments to well owners in the state. Gibney found the company knew it owed interest on the tardy payments and withheld them until a well owner demanded it, a policy that allowed the company to escape millions of dollars in payments each year.

Sunoco “simply keeps the money for its own use, knowing two things: that most owners will not request interest, and that eventually the owners’ potential claims will die at the hands of the statute of limitations,” the judge held.

Gibney awarded the well owners $80 million in compensatory damages and $75 million in punitive damages. Gibney issued a plan of allocation to divvy up and distribute the damages.

The 10th Circuit dismissed the company’s appeal on Nov. 1, 2021, “because Sunoco did not meet its burden to establish appellate jurisdiction.”

The company argues that if the Supreme Court fails to intervene, the money could go out to well owners before it can challenge the decision to dismiss the appeal for lack of jurisdiction.

The company also argues that the other side is trying to enforce the judgment aggressively and “in the most disruptive manner possible.”

The Epoch Times reached out to Sunoco attorney Paul D. Clement and Cline attorney Russell S. Post for comments but did not immediately receive replies.