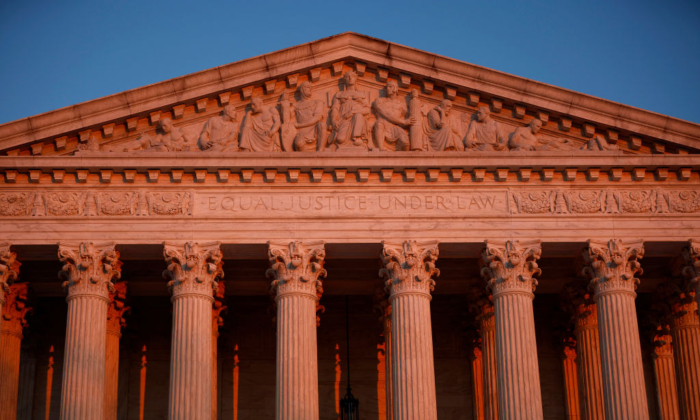 The Supreme Court was urged on March 2 not to allow an innkeeper near the Canadian border, who sued for being injured by a U.S. Border Patrol agent, to pursue a lawsuit against the agent.

The case concerns whether the half-century-old Bivens Doctrine, which shields federal agents from legal liability for actions performed in the course of their work, should be expanded to new contexts, such as those with national security implications, something legal observers say the Supreme Court seems unlikely to do.

“And for almost 40 years, we have consistently rebuffed requests to add to the claims allowed under Bivens,” Justice Samuel Alito wrote (pdf) for the majority.

The 2020 case concerned a Mexican teen who was shot and killed by a U.S. border agent who fired from the U.S. into Mexico, allegedly to defend himself from rock-throwing individuals. The high court held in a 5–4 decision that a Bivens claim couldn’t be extended to that case in which there could be significant foreign affairs and national security repercussions, as The Epoch Times reported at the time.

During a smuggling investigation at the ironically named Smuggler’s Inn Bed and Breakfast in Blaine, Washington, about 10 feet from the Canadian border, U.S. Border Patrol agent Erik Egbert allegedly injured innkeeper Robert Boule. Boule had previously been a paid government informant whose tips led to multiple arrests of his guests; he had also been charged by Canadian authorities with human trafficking, but the charges were eventually dismissed.

The case goes back to March 2014, when Boule tipped off Egbert about a Turkish national who would be arriving at his establishment later that day. Egbert suspected the Turkish man might be planning criminal activities and waited for him to arrive. When the man showed up in a car, Boule asked Egbert to leave the property, but the agent refused and stood between the car and the man. Egbert allegedly pushed Boule to the ground and then confirmed the Turkish man was lawfully present in the United States.

Boule sought medical treatment for a back injury he claimed Egbert caused him, and complained to Egbert’s superiors. Boule alleged that Egbert then retaliated by reporting Boule to the IRS, claiming tax evasion by Boule, which led to the agency investigating and auditing Boule.

Boule sued Egbert in U.S. District Court for the Western District of Washington in what has become known as a Bivens action, claiming his rights under the Fourth Amendment and his First Amendment right not to be retaliated against for complaining to Egbert’s overseer were violated. That court ruled in favor of Egbert, but a fractured U.S. Court of Appeals for the 9th Circuit reversed, finding for Boule.

In Bivens v. Six Unknown Named Agents (1971), the Supreme Court recognized a cause of action under the U.S. Constitution for damages against Federal Bureau of Narcotics agents for alleged violations of the Fourth Amendment. The bureau, created in 1930, was a forerunner of today’s U.S. Drug Enforcement Agency.

When it decided to hear Egbert v. Boule, the Supreme Court indicated it wanted to look at whether a valid cause of action exists under Bivens for claims against federal officers engaged in immigration-related functions for allegedly violating a plaintiff’s rights under the Fourth Amendment. The court also agreed to consider whether the Bivens precedent could be used to pursue a claim for First Amendment retaliation claims, but pointedly refused the petitioner’s request to look at “whether the court should reconsider Bivens.”

Although some courts in recent years have been moving away from judge-made rules, preferring to let lawmakers decide how constitutional violations should be handled, the Supreme Court has resisted overturning Bivens.

During oral arguments, Egbert’s attorney, Sarah M. Harris, urged the court not “to expand Bivens for the first time in 40 years.”

To do so would “clash with modern precedent,” she said. “Bivens interpreted federal courts’ jurisdiction over federal questions as authorizing courts to fashion new damages actions. Decades of intervening cases reject that premise and remove any doctrinal basis for Bivens extensions.

“The Constitution vests Congress alone with the power to create damages actions.”

Boule’s lawyer, Felicia H. Ellsworth, said the court should allow the case to move forward because her client’s Fourth Amendment claim “is materially indistinguishable from Bivens itself.”

“A federal law enforcement agent entered private property without a warrant and used excessive force, just like the federal agents in Bivens,” she said.

Barring the lawsuit from proceeding “would contravene the historical foundations allowing individual damages to right a federal officer’s constitutional wrong.”

Justice Clarence Thomas suggested to Ellsworth that her client was swimming against the tide.

“Aren’t you up against the fact that we have declined to apply or extend Bivens in recent history? We’ve almost universally declined to expand it into new contexts.”

Although the events in question took place near an international border, Ellsworth told Thomas this isn’t “a new context.”

“This is an unlawful entry without a warrant, and this is excessive force on private property against a U.S. citizen on domestic soil,” the lawyer said.

Gorsuch noted that when it heard the case, the 9th Circuit “said this is a new context and you say it is not a new context because the actions of the officers here are pretty similar to those in Bivens.”

“What is a good and faithful judge supposed to try and do … acknowledging the fact too that this court hasn’t recognized a new Bivens action in decades?” the justice told Ellsworth.

U.S. Department of Justice attorney Michael Huston urged the Supreme Court not to extend Bivens to this case.

“This court has recognized that agents’ effective policing of the border has a clear and strong connection to national security, and Congress has also determined that law enforcement at the border is different from other kinds of law enforcement,” he said.

“All those features give ample reason to doubt that Congress would have wanted an individual damages remedy in the circumstances here.”

Justice Elena Kagan asked Huston: “How is this a case about national security?

“Borders have something to do with national security, but every time … a border agent checks on immigration status of a person, we kind of wave our arms and say national security and say there’s no Bivens remedy because of that?”

Huston replied that in Hernandez v. Mesa, the Supreme Court “said that the protection of the border, the prevention of the unlawful entry of persons and drugs and other contraband, has a clear and substantial connection to national security.”

Kagan suggested the Hernandez ruling took place in “a very different kind of case … a cross-border shooting and … it clearly had implications for the relationship between the United States and Mexico.”