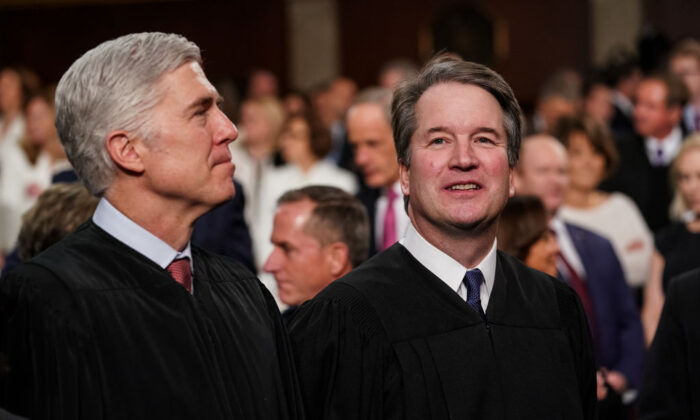 Supreme Court Justices Neil Gorsuch and Brett Kavanaugh attend the State of the Union address in the chamber of the U.S. House of Representatives at the U.S. Capitol Building on Feb. 5, 2019. (Doug Mills-Pool/Getty Images)
Crime and Incidents

In a complex 5–4 ruling that narrows its own 2020 decision enhancing tribal authority in Oklahoma, the Supreme Court ruled on June 29 in favor of the state’s prosecution of a non-Native American man convicted of neglecting his young Indian stepdaughter on Indian territory.

The decision is a win for the state of Oklahoma and the principle of state sovereignty.

“To be clear, the court today holds that Indian country within a state’s territory is part of a state, not separate from a state,” Kavanaugh wrote. “Therefore, a state has jurisdiction to prosecute crimes committed in Indian country unless state jurisdiction is preempted.”

He also noted that federal law “does not preempt the state’s authority to prosecute” regarding “crimes committed by non-Indians against Indians in Indian country.”

The new decision comes after the high court’s July 9, 2020, ruling that most of eastern and some of central Oklahoma is Native American land because it hosted Indian reservations. The ruling threw the justice system in the state into disarray.

Gorsuch wrote the court’s 5–4 decision (pdf) in McGirt v. Oklahoma, which was joined by the four liberal justices who sat on the court at that time.

The court’s liberal justices often vote as a bloc, which suggests the outcome in the Castro-Huerta case may have been different if the court’s composition hadn’t changed after the McGirt ruling.

The effect of the McGirt ruling was that prosecution of Native Americans on the affected lands may only be pursued in tribal courts or in federal courts under a federal statute enacted in 1885 called the Major Crimes Act, which put some crimes under federal jurisdiction if they were committed by an Indian in Indian country.

Another court clarified that the reservations belonged to the so-called Five Civilized Tribes—Cherokee, Chickasaw, Choctaw, Creek (Muscogee), and Seminole.

In the case at hand, respondent Victor Manuel Castro-Huerta, an illegal alien who isn’t an Indian, was convicted of neglecting his 5-year-old stepdaughter, an enrolled member of the Eastern Band of Cherokee Indians who has cerebral palsy and is legally blind.

The abuse took place on the Cherokee Nation reservation. Castro-Huerta received a prison term of 35 years.

The Oklahoma Court of Criminal Appeals threw out the man’s conviction, finding that the crime had occurred in Indian country. The appeals court also held that the McGirt decision “extends beyond the confines of the Major Crimes Act to all crimes committed by non-Indians against Indians in Indian country.”

But the new Supreme Court opinion states that despite McGirt, the state may prosecute Castro-Huerta for crimes in Indian county.

“This case presents a jurisdictional question about the prosecution of crimes committed by non-Indians against Indians in Indian country: Under current federal law, does the Federal Government have exclusive jurisdiction to prosecute those crimes?” Kavanaugh wrote.

Kavanaugh recounted the facts of the case.

In 2015, Castro-Huerta lived in Tulsa, Oklahoma, with his wife and their children, including Castro-Huerta’s then-5-year-old stepdaughter.

One day, his sister-in-law dialed 911 after discovering the sick girl. She weighed only 19 pounds; was “dehydrated, emaciated, and covered in lice and excrement”; and investigators found that her bed was crawling with bedbugs.

“When questioned, Castro-Huerta admitted that he had severely undernourished his stepdaughter during the preceding month,” the justice wrote.

Oklahoma charged both Castro-Huerta and his wife with criminal child neglect. Both were convicted. While Castro-Huerta’s appeal was before the state courts, the Supreme Court issued the McGirt ruling, holding that because Congress “had never properly disestablished the Creek Nation’s reservation in eastern Oklahoma,” the reservation remained “Indian country,” according to Kavanaugh.

“The eastern part of Oklahoma, including Tulsa, is now recognized as Indian country,” he wrote. “About two million people live there, and the vast majority are not Indians.”

The Oklahoma Court of Criminal Appeals sided with him, finding that the state couldn’t prosecute him and overturning his conviction.

While the appeal was ongoing, a federal grand jury indicted Castro-Huerta for the same conduct. He cut a deal with prosecutors for a 7-year sentence—instead of the previous 35-year sentence—after which he would be deported from the United States.

The Supreme Court reversed the judgment of the Oklahoma Court of Criminal Appeals and “[remanded] the case for further proceedings not inconsistent with this opinion.”

In his dissent, Gorsuch said the court was wrong to side with Oklahoma.

“Now, at the bidding of Oklahoma’s executive branch, this court unravels … lower-court decisions, defies Congress’ statutes requiring tribal consent, offers its own consent in place of the tribe’s, and allows Oklahoma to intrude on a feature of tribal sovereignty recognized since the founding,” he wrote.

“One can only hope the political branches and future courts will do their duty to honor this nation’s promises even as we have failed today to do our own.”

Oklahoma Gov. Kevin Stitt, a Republican, hailed the court majority for affirming that “Indian country is part of a state, not separate from it.”

“Today’s ruling is a clear victory for all four million Oklahomans, the state of Oklahoma, and the rule of law.

“I am heartened that the Supreme Court ruled in our favor, allowing Oklahoma to prosecute non-natives who violate the law and protect native victims,” Stitt said in a statement.

“Since the court’s 2020 McGirt decision, federal prosecutors have declined thousands of cases like Castro-Huerta … [and] justice has been delayed and denied to thousands of native victims in our state for no reason other than their race.

“Now Oklahoma law enforcement can help uphold and enforce the law equally, as we have done for over a century.”

Oklahoma-based U.S. Attorneys Christopher Wilson, Clinton Johnson, and Robert Troester said in a joint statement that they “will continue to enforce federal law in Indian country.”

The Biden administration participated in the case in a friend-of-the-court capacity.

The Epoch Times reached out for comment to counsel for Castro-Huerta, Zachary Charles Schauf of Jenner and Block in Washington, but did not receive a reply as of press time.