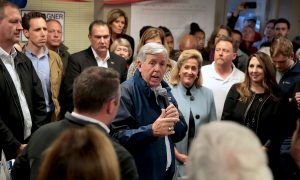 The Supreme Court on May 28 upheld an Indiana law that prohibits abortion providers from discarding aborted children’s bodies and body parts together with used needles and lab animal carcasses.

The nation’s top court overturned a decision by the 7th Circuit Court of Appeals that ruled the Indiana law was irrational and unconstitutional.

Supreme Court Justice Clarence Thomas, writing on behalf of the majority, said that the circuit court’s “decision was manifestly inconsistent with our precedent.”

“I would have thought it could go without saying that nothing in the Constitution or any decision of this Court prevents a State from requiring abortion facilities to provide for the respectful treatment of human remains,” Thomas wrote in an opinion (pdf).

The 7th Circuit Court of Appeals ruled that Indiana’s interest in the “humane and dignified disposal of human remains” was not legitimate. The Supreme Court rejected that argument, citing a precedent.

The Indiana Department of Health and others sued Planned Parenthood’s local affiliate and other parties for incinerating aborted children’s body parts together with surgical byproducts, used needles, and lab animal carcasses, arguing that the abortion provider ran afoul of the state’s law requiring for dignified disposal of human remains.

In the same ruling, the Supreme Court denied a request to rule on a decision by the 7th Circuit Court of Appeals to strike down an Indiana law. The law prohibited abortions in cases when the mother made the decision to abort her child solely on the basis of the child’s gender or disability.

“Only the Seventh Circuit has thus far addressed this kind of law,” the opinion stated. “We follow our ordinary practice of denying petitions insofar as they raise legal issues that have not been considered by additional Courts of Appeals.”

While Thomas concurred with the majority that the Supreme Court should not yet hear the case, he argued that the court will soon need to do so “given the potential for abortion to become a tool of eugenic manipulation.” Eugenics is a set of beliefs that the genetic quality of humans can be improved by the use of morally questionable means that exclude some groups in favor of others.

“The use of abortion to achieve eugenic goals is not merely hypothetical,” Thomas wrote.

“The foundations for legalizing abortion in America were laid during the early 20th-century birth-control movement. That movement developed alongside the American eugenics movement. And significantly, Planned Parenthood founder Margaret Sanger recognized the eugenic potential of her cause,” he added.

In his opinion, Thomas reviewed the history of the eugenics movement in the United States and linked it to the reality of abortions today. Thomas pointed out that the rate of abortions per 1,000 live births for black women is 3.5 times that of white women. Similar statistics apply for other populations, Thomas noted, pointing to abortion data showing that Chinese and Asian-Indian families in the United States tend to sex-select boys.

“Having created the constitutional right to an abortion, this Court is dutybound to address its scope,” Thomas wrote.