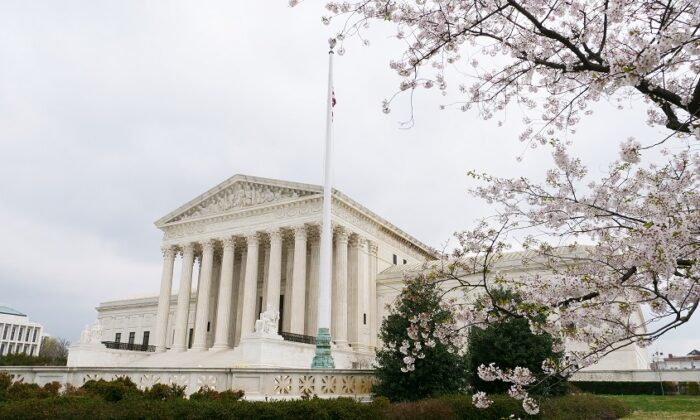 The Supreme Court building in Washington on March 26, 2020. (Juliet Wei/Sound of Hope)
By Matthew Vadum

A Kansas police officer acted lawfully when he pulled over a vehicle whose owner’s license was revoked before verifying the driver was the owner, the Supreme Court has decided.

The April 6 ruling came in a case, cited as Kansas v. Glover, that weighed the importance of road safety against drivers’ privacy rights.

The law enforcement officer’s assumption that the car was being driven by the owner was deemed reasonable by the court.

“We hold that when the officer lacks information negating an inference that the owner is the driver of the vehicle, the stop is reasonable,” Justice Clarence Thomas wrote for the majority.

Citing a 1979 Supreme Court case known as Delaware v. Prouse, Thomas noted that the court has “previously recognized that States have a ‘vital interest in ensuring that only those qualified to do so are permitted to operate motor vehicles [and] that licensing, registration, and vehicle inspection requirements are being observed.’”

Some law-and-order advocates have complained over the years that what they characterize as hyper-technical or farfetched interpretations of laws allow otherwise guilty individuals to escape responsibility for their actions. This new ruling shuts down a novel means of attacking the lawfulness of an investigative stop using the Fourth Amendment, which guards against unreasonable searches and seizures by police.

In the case at hand, the Kansas Supreme Court broke with 12 state supreme courts and four federal circuits, holding that the stop at issue violated the Fourth Amendment.

The 8–1 Supreme Court ruling is a victory for the Trump administration, which backed the Sunflower State in the appeal.

“It does not ask them to set aside common sense when they step into the patrol car. The traffic stop at issue in this case was constitutional because it was based on a common-sense inference. It was reasonable for the officer to think that [the respondent] Charles Glover might be the person driving the truck registered in his name.”

Kansas charged Glover with driving as a habitual violator after the traffic stop showed he was driving with a revoked license. Glover moved to suppress all evidence seized during the stop, asserting that the officer lacked reasonable suspicion to pull him over.

While the trial court granted Glover’s motion to suppress, a state appeals court reversed, finding that “it was reasonable for [the deputy] to infer that the driver was the owner of the vehicle” because “there were specific and articulable facts from which the officer’s common-sense inference gave rise to a reasonable suspicion.”

The Kansas Supreme Court reversed the appeals court, determining that the police officer lacked reasonable suspicions because his inference that the car’s owner was behind the wheel amounted to “only a hunch” that the individual was engaged in criminal activity. That “hunch” involved “applying and stacking unstated assumptions that are unreasonable without further factual basis.”

Justice Sotomayor agreed with the thrust of the Kansas Supreme Court’s decision.

“Suppose you knew that the registered owner of the vehicle no longer had a valid driver’s license. That added fact raises a new question. What are the odds that someone who has lost his license would continue to drive? The answer is by no means obvious.”

The majority opinion “unnecessarily reduces the state’s burden of proof,” she wrote.

“The consequence of the majority’s approach is to absolve officers from any responsibility to investigate the identity of a driver where feasible,” Sotomayor wrote. “But that is precisely what officers ought to do—and are more than capable of doing.