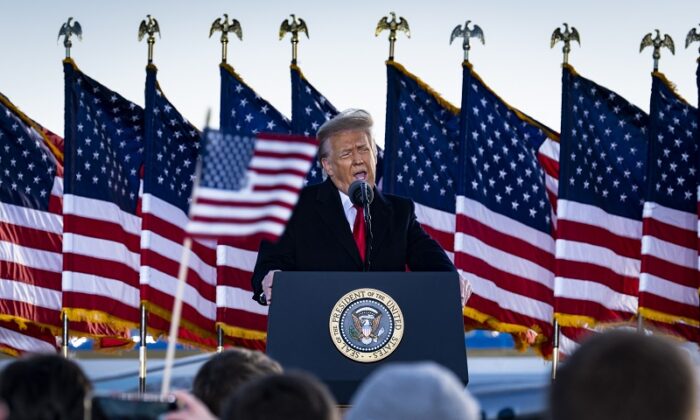 The Supreme Court has thrown out two longshot anti-corruption lawsuits against former President Donald Trump on the grounds that they were moot because he has left office and become a private citizen.

No justices dissented from the rulings, which are victories for Trump. The novel lawsuits came about because Trump, a billionaire real estate developer, refused under intense pressure from his opponents to give up his business empire while in the White House. While he did step aside from managing his businesses while president, that didn’t satisfy his critics.

The lawsuits claimed that while in office, Trump violated the Foreign Emoluments Clause of the U.S. Constitution, which prevents any “Person holding any Office of Profit or Trust under them” from accepting “any present, Emolument, Office, or Title … from any King, Prince, or foreign State.” The hardly ever litigated clause forbids government officials from receiving gifts from foreign states and monarchies without the consent of Congress, in the hope of shielding the “small-R” republican character of the United States from corrupting foreign influences.

Trump, acting in his official capacity as president, made arguments in a brief.

“The Constitution’s Foreign and Domestic Emoluments Clauses are structural provisions that prophylactically protect the Nation as a whole against the corruption of official action. Yet in seeking to invoke the power of the federal courts to determine whether the President is violating the Emoluments Clauses because of his financial interests in various hotels and restaurants, respondents rely on attenuated and speculative economic harms that their businesses allegedly suffer in competing for the patronage of foreign and domestic governmental customers,” the brief states.

In Trump v. CREW, which had been before the U.S. Court of Appeals for the 2nd Circuit, lawyer Deepak Gupta argued his clients, high-end businesses in competition with Trump’s businesses, experienced a “distinct disadvantage in competing for foreign and domestic government clientele: While they can offer the finest hospitality, they cannot offer the ability to curry favor with the President.”

In Trump v. District of Columbia, the District and Maryland argued the mere fact that foreign officials stayed at Trump’s hotel in the nation’s capital and paid money to do so implied corruption was somehow afoot. That case was before the U.S. Court of Appeals for the 4th Circuit.

The losing litigants put a positive spin on their legal defeats.

D.C. Attorney General Karl Racine and Maryland Attorney General Brian Frosh, both Democrats, said in a joint statement: “We are proud that because of our case, a court ruled on the meaning of ‘emoluments’ for the first time in American history, finding that the Constitution prohibits federal officials from accepting almost anything of value from foreign or domestic governments.

“History will note that at every step of this case, President Trump and political appointees at the Department of Justice went to extreme lengths to prevent us from uncovering the true extent of his corruption. He attempted to short-circuit the rules of legal procedure to have our case dismissed and avoid discovery into his finances, arguing that the law did not apply to him.

“Our case proves once again that in our country no one—not even the President of the United States—is above the law.”

CREW Executive Director Noah Bookbinder said in a statement that his nonprofit “sued Donald Trump on his first day in the Oval Office for systematic violations of the Emoluments Clauses of the Constitution.”

“This important litigation made the American people aware for four years of the pervasive corruption that came from a president maintaining a global business and taking benefits and payments from foreign and domestic governments. Only Trump losing the presidency and leaving office ended these corrupt constitutional violations stopped these groundbreaking lawsuits,” Bookbinder said.

The Trump Organization didn’t respond to requests for comment by press time.