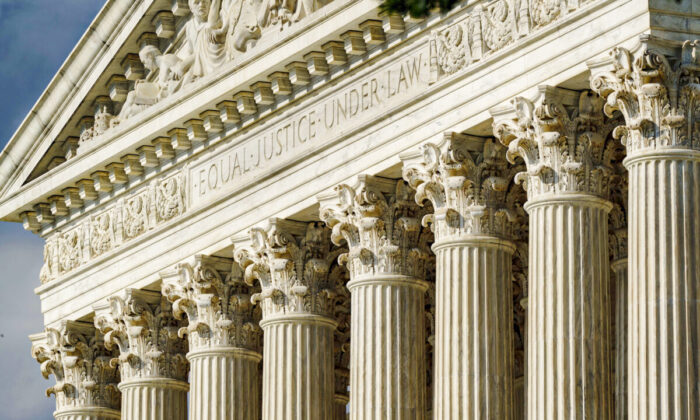 The Supreme Court agreed on May 2 to take a case about whether a bankrupt debtor can escape liability for a debt arising out of someone else’s fraudulent act.

Kate Bartenwerfer, who filed for bankruptcy after an ill-fated real estate deal, appealed after the often-reversed U.S. Court of Appeals for the 9th Circuit ruled she can’t get away from a debt that is nondischargeable in bankruptcy, even though she maintains she had nothing to do with her husband’s fraudulent conduct in the sale of their San Francisco home.

The couple had purchased and renovated the house. They moved out, and the husband took care of the sale of the house with his wife’s permission but without any substantial involvement on her part. Without the wife’s knowledge, the husband allegedly made false representations to the buyer, the respondent Kieran Buckley.

The wife’s attorney, Iain Angus Macdonald of Macdonald Fernandez LLP, didn’t reply by press time to requests by The Epoch Times for comment.

But Macdonald told Bloomberg Law that the “more modern, enlightened approach” is not to hold the innocent spouse liable in these situations.

“One spouse should not bear the burden of the flaws of the other spouse,” the lawyer reportedly said.

The case is Bartenwerfer v. Buckley, court file 21-908. As is their practice, the justices didn’t indicate why they granted the petition. The case may be heard as soon as the fall when the court begins a new term.

Buckley sued Bartenwerfer and her husband, David, after finding structural defects in the house. The Bartenwerfers both declared bankruptcy after a jury sided with Buckley in 2012.

The 9th Circuit ruling last year worsened “an intractable split” among federal courts of appeal, the wife stated in her petition (pdf) to the Supreme Court.

Buckley, on the other hand, praised the 9th Circuit for getting it right in his opinion. Bankruptcy law “excepts from discharge all debts for money that was ‘obtained by’ actual fraud, without regard to the debtor’s involvement in, or state of mind as to, the underlying fraud itself,” he stated in a brief.

Even though the Bartenwerfers attested in legal documents involved in the transaction that they made an effort to fully disclose all material facts relating to the property, several significant problems weren’t disclosed.

Buckley sued in California state court, alleging defects in the house. He sued the Bartenwerfers for breach of contract, negligence, nondisclosure of material facts, negligent misrepresentation, and intentional misrepresentation. A jury awarded Buckley damages, finding for him regarding breach of contract, negligence, and nondisclosure of material facts, but against him on his remaining claims. The Bartenwerfers filed for bankruptcy.

In bankruptcy court, Buckley tried to pursue his judgment by initiating an adversary proceeding against the Bartenwerfers, arguing that the state court judgment against the couple couldn’t be discharged in bankruptcy under federal law, which provides that a debtor can’t discharge debt that was obtained through fraud. The bankruptcy court found that the Bartenwerfers intended to deceive Buckley and that the portion of the judgment related to Buckley’s nondisclosure claim was nondischargeable.

That court found that because the husband had knowledge of the false representations made to Buckley that the husband’s fraudulent conduct could be imputed onto his wife because of their partnership relationship.

Buckley’s attorneys, Zachary D. Tripp and Janet Marie Brayer, didn’t respond by press time to a request by The Epoch Times for comment.