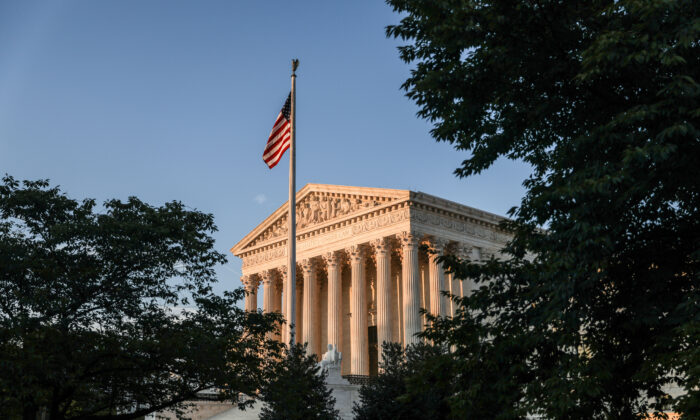 Black pro-life organizations are arguing in an abortion case soon to be heard by the Supreme Court that “unqualified and uncredentialed abortion providers” have a long history of “disproportionately harming black women.”

The right to abortion, which the court established in Roe v. Wade (1973), isn’t at issue in the case but some observers speculate that the increasingly conservative Supreme Court may adopt a narrower view of what constitutes a constitutionally impermissible burden on women seeking abortions.

Views expressed in 2019 by Clarence Thomas, the Supreme Court’s sole black justice, in a case cited as Box v. Planned Parenthood, go further than those expressed by groups in the current case. In a concurring opinion to deny a petition to review the case, Thomas argued that abortion itself harms the black community.

As The Epoch Times previously reported, Thomas voted to deny an appeal from the 7th Circuit Court of Appeals, which struck down an Indiana law that outlawed abortions in cases where mothers opted to abort on the basis of a child’s race, sex, disability, Down syndrome diagnosis, or other characteristics.

“Given the potential for abortion to become a tool of eugenic manipulation, the Court will soon need to confront the constitutionality of laws like Indiana’s,” Thomas wrote.

Thomas argued that the use of abortion for eugenics purposes is “not merely hypothetical.” He cited international examples of where the goals of eugenics are being achieved through abortion.

“Whatever the reasons for these disparities, they suggest that, insofar as abortion is viewed as a method of ‘family planning,’ black people do indeed [take] the brunt of the ‘planning,’” he added.

In this case, the nation’s highest court has decided to review abortion restrictions in Louisiana, where Act 620, enacted in 2014, requires the abortionist to have “active admitting privileges” within 30 miles of where the procedure takes place. Act 620 was modeled after and is almost identical in wording to HB 2, a Texas law the Supreme Court struck down in 2016 in Whole Woman’s Health v. Hellerstedt, plaintiff June Medical Services, a clinic in Shreveport, stated in its petition filed with the high court.

The 5th Circuit Court of Appeals upheld the Louisiana law, which officials say might only lead to short delays at one of three abortion-offering clinics in the state.

On Feb. 7, 2019, the court stayed enforcement of Act 620 on a 5–4 vote. Chief Justice John Roberts, part of the conservative bloc on the court, joined with four liberal justices in that vote.

Officials of black pro-life organizations signed a friend-of-the-court brief in the upcoming case, stating they “believe that every person’s life has value, whether that person is an unborn child or a mother seeking an abortion. Black women are the primary recipients of abortion services in Louisiana. Louisiana’s Act 620 helps to protect the lives of mothers—especially black women—who seek abortions in the state.”

The signers are: Dr. Alveda King of Civil Rights for The Unborn (who is the niece of the Rev. Dr. Martin Luther King Jr.); Stacy Washington of Project 21; Ryan Bomberger of the Radiance Foundation; Troy Rolling of the Frederick Douglass Foundation; Dean Nelson of the Douglass Leadership Institute; Catherine Davis of the Restoration Project; Walter and Lori Hoye of the Issues4Life Foundation; Day Gardner of the National Black Pro-Life Union; and the Revs. Brian and Denise Walker of Everlasting Light Ministries.

In the brief they state:

“The struggle for racial equality is not over. The black community experiences a disproportionate share of abortions, often from doctors that do not have the same credentials as those who perform other forms of surgery. Until Act 620, Louisiana’s abortion clinics were exempt from the admitting privileges requirement that applies to other outpatient and ambulatory surgical centers in the state. This disparity is significant to black women, who make up the majority of abortion clinic patients and thus bear most of the known risks of abortion in Louisiana. These known risks are life-threatening to mothers.”

The unhygienic, unsafe practices in place in many of the nation’s barely regulated abortion clinics came to light during the trial of Philadelphia abortionist Kermit Gosnell. In 2013, Gosnell, whose clinic was filled with blood-covered furniture and dirty medical instruments, was sentenced to life imprisonment on three counts of first-degree murder for stabbing three babies born alive with scissors.

Act 620 aims to prevent harm to pregnant women and their babies by creating “a means for reports about individual doctors to be checked against a national database — for the benefit of all patients, of all races, equally,” the brief states.