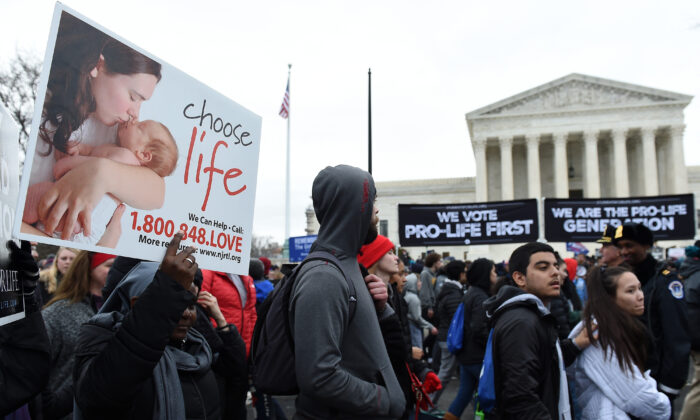 Pro-life activists demonstrate in front of the U.S. Supreme Court during the 47th annual March for Life in Washington on Jan. 24, 2020. (Olivier Douliery/AFP via Getty Images)
Judiciary

The Supreme Court is gearing up to hear a serious legal challenge on Dec. 1 to its 1973 ruling legalizing abortion throughout the United States—and contributing mightily to the polarization of the politics of the nation for nearly half a century.

It’s the first direct challenge to Roe v. Wade, the 1973 ruling that made abortion lawful throughout the United States, that the high court will hear since conservative Justice Amy Coney Barrett’s addition to the bench a year ago gave its conservative wing a 6–3 majority.

Barrett replaced the late liberal icon Justice Ruth Bader Ginsburg, leading to widespread condemnation by left-wing activists who say the court will erase abortion rights. On the other side of the political fray, some conservatives have been critical of the court’s three newest members—Barrett, Neil Gorsuch, and Brett Kavanaugh, judicial conservatives appointed by President Donald Trump—saying they haven’t done enough to undo the court’s liberalism or to protect religious freedoms and other civil rights from government encroachment during the ongoing pandemic.

The Supreme Court has many options in the case.

It could overturn Roe v. Wade and return the regulation of abortion to the states—as things were before the 1973 ruling—narrow the ruling’s reach, leave it intact, or do something else. The court also could take aim at the Planned Parenthood v. Casey (1992) ruling, which held that states can’t impose significant restrictions on abortion before a fetus becomes viable for life outside the womb. The Casey ruling didn’t specify when viability occurs but suggested it was at about 24 weeks gestation.

Mississippi’s petition to the Supreme Court says its statute “protects the health of mothers, the dignity of unborn children, and the integrity of the medical profession and society by allowing abortions after 15 weeks’ gestational age only in medical emergencies or for severe fetal abnormality.”

The petition states that surgical abortion after 15 weeks “carries inherent medical threats to the mother.” The risk of the mother dying is 35 times more likely at 16 to 20 weeks than at eight weeks, “and the relative risk of mortality increases by 38 percent for each additional week at higher gestations.”

Roe v. Wade critic Erin Hawley, senior counsel on the appellate team at the Alliance for Defending Freedom, said she was cautiously optimistic that the Supreme Court would finally overturn the 48-year-old ruling.

“That decision is egregiously wrong,” Hawley, wife of U.S. Sen. Josh Hawley (R-Mo.), told The Epoch Times on the eve of oral arguments in the Mississippi case.

“You can hardly find a constitutional law scholar who will argue that it’s correctly decided, so the only real question is whether the Supreme Court will keep in place a wrongly decided decision under this doctrine called stare decisis.”

Stare decisis is Latin for standing by decisions, or following existing legal precedents.

Stare decisis has been heavily criticized by conservative Justice Clarence Thomas, and “rightly so,” Hawley said, because it’s “in a bit of tension with the doctrine of originalism and the very concept of judicial power.”

The Dec. 1 hearing comes as the Supreme Court justices continue to deliberate on two recent abortion statute cases from Texas and Kentucky that deal with questions other than the constitutionality of abortion itself.

The Supreme Court voted 5–4 on Sept. 1 to deny a request to halt enforcement of the law, leaving it in effect, at least for the time being. The next day, President Joe Biden blasted the court, claiming its refusal to block the law was “an unprecedented assault on a woman’s constitutional rights.”

The legal issue, according to court documents, is whether a state “can insulate from federal-court review a law that prohibits the exercise of a constitutional right by delegating to the general public the authority to enforce that prohibition through civil actions.”

The Human Rights of Unborn Children Act, which stopped D&E abortions after 11 weeks of pregnancy, was subsequently enjoined by federal courts. After Gov. Andy Beshear, a Democrat, refused to defend the statute in court, Kentucky Attorney General Daniel Cameron, a Republican, argued he should be allowed to do so.