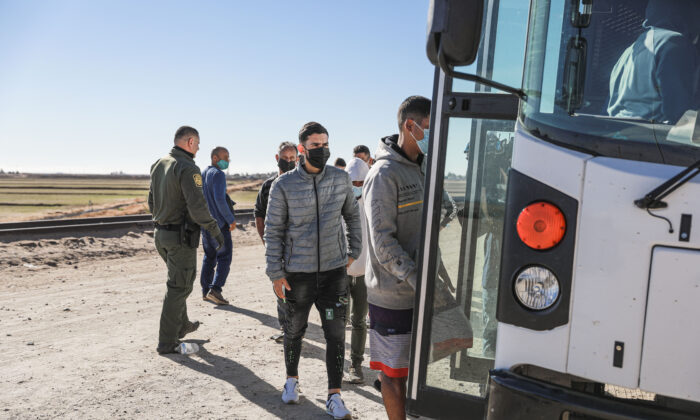 Illegal immigrants who have gathered by the border wall board a bus going to to the Border Patrol station for processing in Yuma, Ariz., on Dec. 10, 2021. (Charlotte Cuthbertson/The Epoch Times)
Immigration & Border Security

The Supreme Court agreed on Friday to hear the Biden administration’s appeal over a Trump-era immigration policy that requires asylum seekers to wait in Mexico until their case is heard, instead of being allowed to await their hearings in the United States.

Lower court rulings had forced the administration to reinstate the “Remain in Mexico” policy, officially called the Migrant Protection Protocols (MPP), that was implemented under the Trump administration in 2019.

Mark Morgan, who was acting commissioner of Customs and Border Protection at the time, told The Epoch Times that the MPP was “​​the most significant game-changer” and largely responsible for a 75 percent drop in illegal crossings.

Arguments will take place in April. A decision is expected by late June.

President Joe Biden had suspended the MPP on his first day in office in January 2021 and the Department of Homeland Security (DHS) officially terminated it in June. But the administration restarted the policy in early December 2021, in El Paso, Texas, after it was ordered by a lower court to do so.

U.S. District Judge Matthew Kacsmaryk had ruled on Aug. 14, 2021, that the Biden administration had to revive the program, after Texas and Missouri sued the administration for having ended the MPP, saying that the decision worsened conditions at the border.

The Supreme Court had declined to intervene on Aug. 24 after the Biden administration filed an emergency motion requesting a stay of Kacsmaryk’s order.

Despite the court order, Homeland Security Secretary Alejandro Mayorkas tried to end the program again in October 2021 via a new memorandum. He argued that while the policy “likely contributed to reduced migratory flows,” it did so “by imposing substantial and unjustifiable human costs on the individuals who were exposed to harm while waiting in Mexico.”

An appeals court upheld the judge’s ruling, finding that the Biden administration erred in ending the program.

In December 2021, the Justice Department asked the Supreme Court to hear the case, arguing that the appeals court’s decision was made in error.

Sen. Bill Hagerty (R-Tenn.) on Feb. 16 sought an opinion from the Government Accountability Office on whether Mayorkas’s memo is subject to the Congressional Review Act, which would mean that Congress could overrule the Biden administration’s move to end the policy.