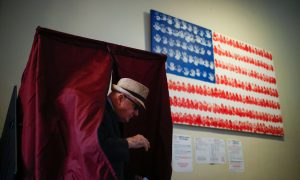 How the Electoral College Works Today
0 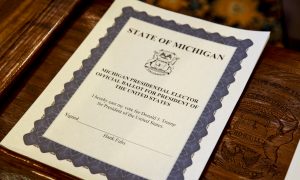 The Electoral College—After the People Vote
0

The Supreme Court of the United States in Washington on May 7, 2019. (Samira Bouaou/The Epoch Times)
2020 Election

The U.S. Supreme Court on Friday has agreed to take up a dispute that questions whether an electoral college member is bound by the state to support the presidential candidate chosen by the popular vote.

The top court granted a petition to review a pair of cases—from Washington state and Colorado—that will decide the enforceability of state laws that threatens to penalize a presidential elector if they refused to vote for the candidate they pledged to support, commonly referred to as “faithless electors.”

The Supreme Court’s decision, expected later in the year, will likely have ramifications on this year’s presidential race if the electoral college members seek to casts votes for someone who did not win the popular vote in the state.

When an elector does not vote for a candidate who was chosen by the popular vote, some states provide that the deviant vote be canceled, and the elector replaced, according to FairVote.org.

Meanwhile, some states allow the vote to stay but would impose a penalty on the elector. Some states also allow both the canceling of the vote and a penalty.

Both Washington and Colorado have laws that direct how electors perform their duties and enforce consequences for casting a vote that deviates from the will of the people.

In Washington, an elector can be fined if they vote contrary to how the law directs. Meanwhile, in Colorado, if an elector does not back the candidate with a popular vote, they would have been deemed to have “refused to act,” resulting in a vacancy in that elector’s office that needed to be immediately re-filled.

The lower courts in both cases came to the opposite conclusion about the issues, with the 10th Circuit Court of Appeals in Colorado ruling for the electoral college members. At the same time, the Washington Supreme Court found in favor of the state.

In the Colorado case, one elector Michael Baca was replaced, and his vote canceled when he sought to vote for GOP John Kasich, Ohio’s former governor, in the 2016 presidential election.

Meanwhile, the Washington case was brought by three Democratic electors who chose not to vote for Hilary Clinton during the same presidential election. Instead, all three electors opted for Colin Powell, a former U.S. Secretary of State, and were subsequently fined.

The U.S. Supreme Court did not provide any reasoning for agreeing to hear the cases (pdf). The two cases have been consolidated, and oral argument is like to be scheduled in March or April.

In 2016, 10 of the 538 presidential electors attempted to cast their votes for someone other than their party’s candidate.

The electoral college members cast the electoral votes. All states, except for Maine and Nebraska, have a winner-takes-all system awarding all electors to the presidential candidate who wins the state’s popular vote.

The number of electors in each state is the sum of its two U.S. senators and its number of members in the House of Representatives, based on population size. The District of Columbia, which is not a state, is allotted, three electors.