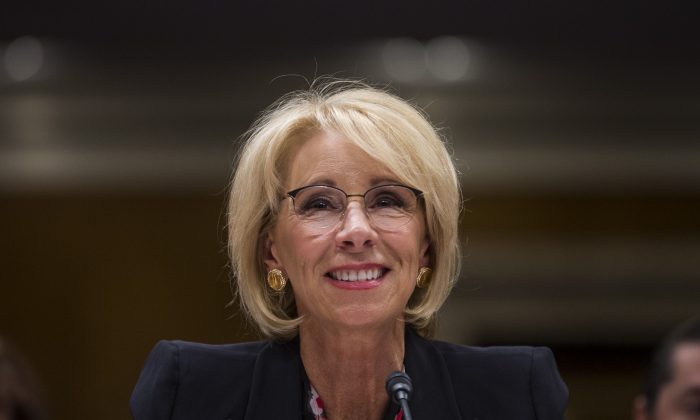 WASHINGTON—The Supreme Court has accepted a case from Montana in which it will consider whether states are allowed to deny tax credit programs to students who opt for religious private schools.

The decision to take the case gives a shot in the arm to the private-school choice movement, which hasn’t made much progress at the federal level in recent years, even though tax credit scholarships are a high-priority agenda item for U.S. Secretary of Education Betsy DeVos.

A tax credit-based scholarship program has been floated at the federal level. It would allow individuals to donate to nonprofit organizations providing scholarships and receive a federal tax credit equal to their donation.

The U.S. Department of Education says the proposed program would amount to “a historic investment in America’s students, injecting up to $5 billion yearly into locally controlled scholarship programs that empower students to choose the learning environment and style that best meets their unique needs.”

Alliance Defending Freedom senior counsel John Bursch weighed in on the side of the students in the lawsuit.

“States cannot base laws on hostility to religion,” Bursch said, as reported by the Catholic News Agency.

“Likewise, no provision of Montana’s constitution can enshrine hostility to religion into state law. We commend the Supreme Court for taking this case.”

The Supreme Court granted certiorari in the case, known as Espinoza v. Montana Department of Revenue, on June 28.

The case raises the question of “whether government may bar religious options from otherwise neutral and generally available student-aid programs,” according to the petition seeking review by the high court.

On Dec. 12, 2018, the Montana Supreme Court declared unconstitutional on a 5–2 vote a state scholarship program that benefited poor children, allowing them to attend the private school their families chose.

The program under review provided a dollar-for-dollar tax credit up to $150 matching an individual’s or a corporation’s donations to nonprofit student scholarship organizations. This, according to the state court, allowed the state legislature to “indirectly pay tuition at private, religiously-affiliated schools,” contrary to Montana law.

The state court found that because the families may use the scholarships at religious schools, the program provided aid to religious institutions and thereby entangled government with religion, contrary to the Establishment Clause of the First Amendment to the U.S. Constitution, along with provisions in the Montana state constitution barring state aid to “sectarian schools.”

“Therefore, the sole issue in this case is whether the Tax Credit Program runs afoul of Montana’s specific sectarian education no-aid provision, Article X, Section 6,” wrote the majority in the Montana ruling. “The legislature’s enactment of the Tax Credit Program is facially unconstitutional and violates Montana’s constitutional guarantee to all Montanans that their government will not use state funds to aid religious schools.”

The petitioners are Kendra Espinoza, Jeri Anderson, and Jaime Schaefer, who are all low-income mothers who needed the scholarship funds to keep their children in Stillwater Christian School, a nondenominational school in Kalispell, Montana. All three take in financial aid from the school, but still have difficulty paying monthly tuition.

There is a further regulatory wrinkle to the case.

The Institute for Justice, a public interest law firm based in Arlington, Virginia, which is representing the petitioners, noted on its website that the Montana Department of Revenue refused to implement the program as state lawmakers intended.

“Not only was the rule unfair, but it was also invalid and unconstitutional. The rule went against the will of the Legislature and also discriminated against religious liberty in violation of the federal Constitutions’ Religion and Equal Protection Clauses.”