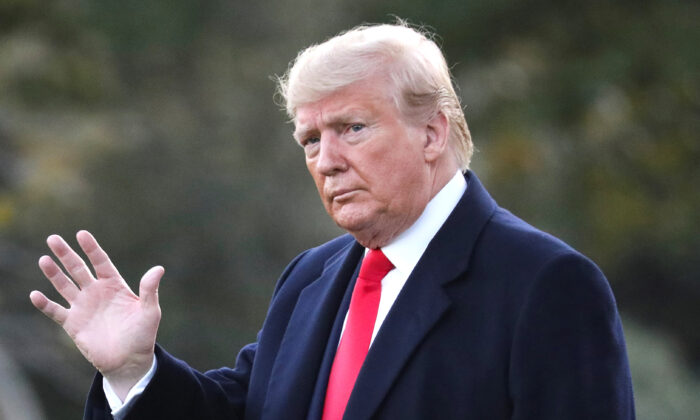 The Supreme Court temporarily stopped a lower court order requiring President Donald Trump to turn over his tax returns to House Democrats amid their impeachment inquiry.

The Supreme Court now will decide whether to take up Trump’s appeal.

“It is ordered that the mandate of the United States Court of Appeals for the District of Columbia Circuit, case No. 19-5142, is hereby stayed pending receipt of a response, due on or before Thursday, November 21, 2019, by 3 p.m. ET, and further order of the undersigned or of the Court,” Supreme Court Chief Justice John G. Roberts wrote (pdf).

The president has requested that the Supreme Court protect his financial records from the House and the Manhattan district attorney’s office.

Lawyers for House Democrats on Nov. 18, before the Supreme Court issued the stay, told the court they wouldn’t oppose Trump’s request for an administrative stay, The Hill reported, adding that they would agree to a 10-day halt.

Trump’s lawyers have argued that the House Oversight Committee has no legitimate reason to seek the documents.

Trump’s attorneys submitted a petition last week to the court to overturn a ruling in a New York court requiring his accountants to turn over tax returns to the Manhattan district attorney’s office. The justices haven’t said whether they would consider the appeal.

“We are hopeful that the Supreme Court will grant review in this significant constitutional case and reverse the dangerous and damaging decision of the appeals court.”