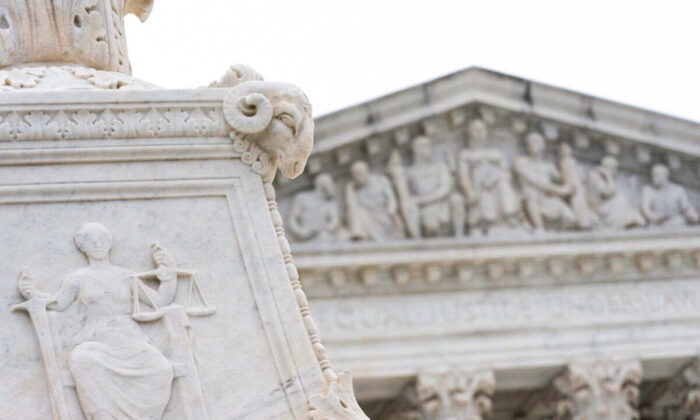 An engraving of the Contemplation of Justice is seen outside the US Supreme Court in Washington, DC, on Feb. 7, 2022. (Stefani Reynolds/AFP via Getty Images)
Judiciary

The Supreme Court on Monday halted an order requiring Alabama to redraw congressional districts ahead of the 2022 elections.

Alabama’s delegation to the U.S. House of Representatives consists of six Republicans and one Democrat.

Alabama was given until Feb. 11 to create a new map, but it appealed the district court’s decision instead.

The Supreme Court’s 5-4 ruling (pdf) grants a stay of the lower court’s order to have the districts redrawn.

The Supreme Court is set to hear the full case next fall.

Roberts wrote that he would not grant a stay and would have allowed the district court opinion to stand while the state of Alabama appeals. He said he agreed to have the court take up the case for the next term.

“I respectfully dissent from the stays granted in these cases because, in my view, the District Court properly applied existing law in an extensive opinion with no apparent errors for our correction,” Roberts wrote.

Alabama, in its emergency application (pdf) to the Supreme Court, had stated, “Without a stay, the State’s forthcoming congressional elections will be run on district lines that never could have been drawn by the Legislature but for sorting Alabamians on the basis of race alone.”

The U.S. Constitution “cannot tolerate such a perversion of the [Voting Rights Act]” that the district court demands, the state of Alabama argued.

“The court’s order is contrary to the promise of the Equal Protection Clause,” the state argued, adding, “The injunction is premised on the noxious idea that redistricting begins and ends with racial considerations” that would place “race first above race-neutral districting criteria, sorting and splitting voters across the State on the basis of race alone.”

According to Alabama, “In a sample of more than two million race-neutral maps generated by [respondents’] own experts, not even one contained two majority-black districts.”

A total of 14 states issued a friend-of-the-court brief to the Supreme Court in support of Alabama’s appeal.