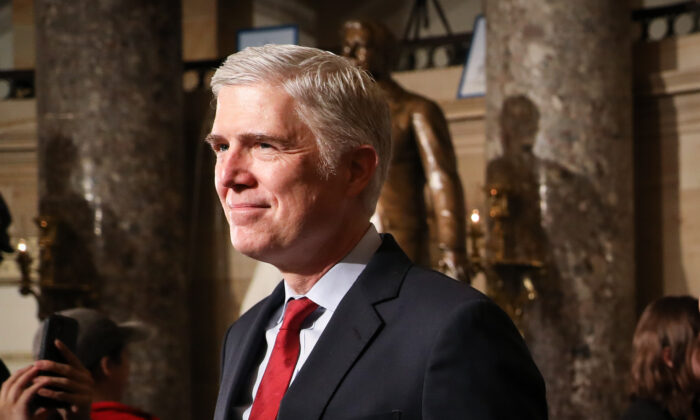 The Supreme Court seemed receptive Dec. 5 to the arguments of a Christian website designer who says Colorado’s law requiring her to create websites to celebrate same-sex weddings infringes on her constitutional rights.

The case is 303 Creative LLC v. Elenis, court file 21-476. The respondent, Aubrey Elenis, is being sued in her official capacity as director of the Colorado Civil Rights Division.

At the hearing, the Biden administration, represented by Deputy U.S. Solicitor General Brian Fletcher, argued in support of the Colorado law.

Left-wing activists have been targeting bakers for years for political purposes, asking Christian confectioners opposed to same-sex marriage to bake wedding cakes for gay marriage celebrations. When the bakers refuse to make the cakes, these activists sue under anti-discrimination laws, hoping to secure favorable legal precedents.

In Masterpiece Cakeshop v. Colorado Civil Rights Commission (2018), the Supreme Court sided with Jack Phillips, a Christian baker whom a gay couple had asked to create a custom cake to celebrate their union, finding a state human rights commission had violated his First Amendment right to free exercise of religion.

But in the case at hand, artist and website designer Lorie Smith of 303 Creative is being singled out by the same Colorado human rights commission because, based on her religious faith, she doesn’t support nontraditional marriage. Smith has said she will design custom websites for anyone, including those who identify as LGBT, so long as their message doesn’t conflict with her religious views. This means that she won’t promote messages that condone violence or encourage sexual immorality, abortion, or same-sex marriage. When clients want such messages expressed, Smith refers them to other website designers.

Smith took action when she discovered she was forbidden under the Colorado Anti-Discrimination Act (CADA) to post a statement online explaining what content she was, and wasn’t, willing to create.

“She serves all people, deciding what to create based on the message, not who requests it. But Colorado declares her speech a public accommodation and insists that she create and speak messages that violate her conscience,” she said, adding that “this court rejects such government-compelled speech.” Colorado argues this case is “just about a sale” but that’s wrong because the state here “forces Ms. Smith to create speech, not simply sell it.”

“If the government may not force motorists to display a motto, school children to say a pledge, or parades to include banners, Colorado may not force Ms. Smith to create and speak messages on pain of investigation, fine, and re-education.”

The three liberal justices took on Waggoner early in the hearing.

Kagan replied, you’re saying Smith “can refuse because there’s ideology just in the fact that it’s Mike and Harry and there’s a picture of these two guys together.”

“That is speech,” Waggoner said.

Justice Sonia Sotomayor said Smith was embracing discrimination, the way a hypothetical luncheonette might “give gay couples a limited menu, not a full menu.”

Sotomayor told Colorado Solicitor General Eric Olson that ruling in favor of Smith “would be the first time in the court’s history … that it would say that a business open to the public … could refuse to serve a customer based on race, sex, religion, or sexual orientation.”

Justice Ketanji Brown Jackson wondered if a photographer who tried to recreate the atmosphere of the classic movie “It’s A Wonderful Life” would be able to exclude black children in a photo featuring a shopping mall Santa Claus.

Justice Samuel Alito came up with a hypothetical in which a black Santa Claus would be able to refuse a photo with a child dressed in a Ku Klux Klan outfit.

Olson said Colorado’s law imposed only a light burden on businesspeople like Smith.

The law targets only “commercial conduct of discriminatory sales and its effect on expression is at most incidental,” he said.

But it “cannot refuse to serve gay couples, as it seeks to do here, just as the Christmas store cannot announce no Jews allowed.”

Giving people like Smith “a license to discriminate would empower all businesses that offer what they believe to be expressive services, from architects to photographers to consultants, to refuse service to customers because of their disability, sexual orientation, religion, or race.”

Justice Neil Gorsuch suggested to Olson that the Colorado law enforced a kind of thought control.

Phillips of Masterpiece Cakeshop had to “go through a re-education training program pursuant to Colorado law, did he not, Mr. Olson?”

Olson bristled at the characterization, saying Phillips “went through a process that ensured he was familiar with–” before being cut off by Gorsuch.

“It was a re-education program, right?” Gorsuch said.

“It was not a re-education program,” Olson replied.

“What do you call it?” Gorsuch said.

“It was a process to make sure he was familiar with Colorado law,” Olson said.

“Someone might be excused for calling that a re-education program,” Gorsuch replied.

Alito told Olson a victory for Colorado would be a win for forced speech, something the Constitution frowns upon.

Under the Colorado law, can people “be forced to write vows or speeches that espouse things they loathe?” the justice said.