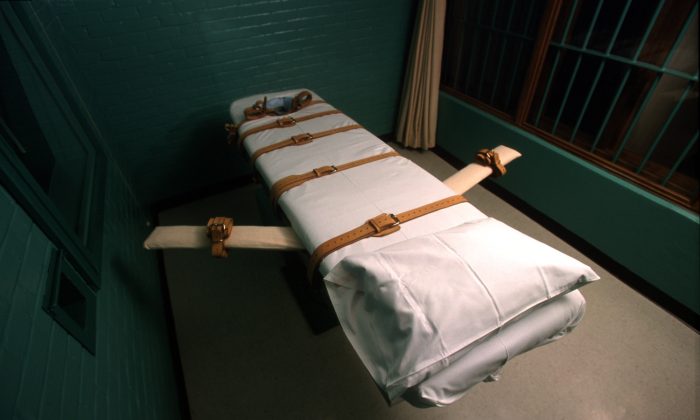 The Supreme Court has sided with a Texas death row inmate who wants his personal pastor to be present, praying, and in physical contact with his body during the administration of the lethal drugs that will end his life.

The justices voted 8–1, finding that John Henry Ramirez, 37, was likely to succeed on his claim that Texas’s restrictions on religious touch and audible prayer in the execution chamber violate the Religious Land Use and Institutionalized Persons Act (RLUIPA).

“The Supreme Court clarified that the rule of law is as ubiquitous as God. Both exist everywhere and always—high up in the hallowed halls of power and down low in the hell of the execution chamber,” Kretzer said in a statement. “After an 8–1 Supreme Court loss, the time has come for the State of Texas to end its failed, taxpayer-funded battle against prayer.”

Ramirez said in his petition to the Supreme Court that Texas was depriving him of his constitutional right to exercise his religion and running afoul of RLUIPA.

“The right of a condemned person to the comfort of clergy—and the corresponding right of clergy to comfort the condemned—are among the longest-standing and most well-recognized religious exercises known to civilization,” the petition reads.

The case goes back to July 19, 2004, when the former U.S. Marine, then 20, seeking money to buy drugs, robbed and murdered Pablo Castro, 46, stabbing him 29 times and taking $1.25 from him. Ramirez robbed a second victim at knifepoint and tried to rob a third. He evaded arrest for 3 1/2 years in Mexico, according to prosecutors.

Ramirez sought a preliminary injunction ordering Texas to permit his religious exercise if the state moved forward with his execution. The U.S. District Court and the U.S. Court of Appeals for the 5th Circuit declined to grant the requested relief.

The Supreme Court granted a last-minute stay of execution on Sept. 8, 2021, hours before the sentence was to be carried out, and heard oral arguments two months later.

In a majority opinion (pdf) written by Chief Justice John Roberts and issued March 24, the court found that Ramirez was likely to succeed on his RLUIPA claims because the state’s restrictions on religious touch and audible prayer in the execution chamber burden religious exercise and aren’t the least restrictive means of furthering the state’s compelling interests.

The court found Ramirez was likely to succeed in proving that his requests were sincerely based on a religious belief and that a laying of hands on him and prayer over him during execution are traditional forms of religious exercise.

Texas had long allowed prison chaplains to pray with inmates in the execution chamber. But in the past few years, the state had decided to prohibit such prayer.

“Despite this long history, prison officials now insist that a categorical ban on audible prayer in the execution chamber is the least restrictive means of furthering two compelling governmental interests,” the opinion states.

Prison officials claim “that absolute silence is necessary in the execution chamber so they can monitor the inmate’s condition through a microphone suspended overhead” and that audible prayer might hinder their efforts “to hear subtle signs of trouble, or prove distracting during an emergency.”

Texas acknowledged that both the federal government and Alabama have recently permitted audible prayer or speech in the execution chamber, but then said—without explaining why—that such a policy isn’t feasible in Texas, the opinion continues.

The Texas ban on religious touch in the execution chamber “fares no better.” The state claims that “security in the execution chamber, preventing unnecessary suffering, and avoiding further emotional trauma to the victim’s family members” justify the prohibition. Texas stated that allowing a spiritual adviser to touch an inmate would place the adviser in harm’s way because the inmate might escape his restraints, smuggle in a weapon, or become violent. Or the spiritual adviser might tamper with the prisoner’s restraints or yank out an intravenous line.

But Texas could still find a less restrictive means of addressing its otherwise valid concerns, the court held. Ramirez showed he will suffer irreparable harm should he be unable “to engage in a protected religious exercise in the final moments of his life.”

“Because it is possible to accommodate Ramirez’s sincere religious beliefs without delaying or impeding his execution, we conclude that the balance of equities and the public interest favor his requested relief,” the opinion reads.

The Supreme Court ordered the case remanded to the lower courts.

Since the murder, Ramirez “has manufactured more than a decade of delay to evade the capital sentence lawfully imposed by the State of Texas,” according to Thomas.

“This Court now affords yet another chance for him to delay his execution.”