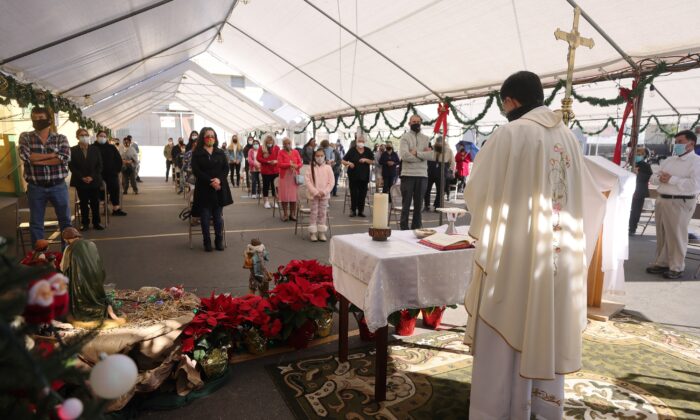 The nation’s top court issued orders in two cases, siding with churches that had protested the state banning indoor services. But the court did not agree to strike down prohibitions on singing and chanting during indoor services, and will not block California from imposing 25 percent capacity restrictions in areas deemed tier one on a scale of CCP (Chinese Communist Party) virus transmission.

The case drew four different opinions from the nine-person court.

“The state has concluded, for example, that singing indoors poses a heightened risk of transmitting COVID-19. I see no basis in this record for overriding that aspect of the state public health framework,” he added. “At the same time, the state’s present determination—that the maximum number of adherents who can safely worship in the most cavernous cathedral is zero—appears to reflect not expertise or discretion, but instead insufficient appreciation or consideration of the interests at stake.”

Gorsuch, with whom Thomas and Alito joined, said California “has openly imposed more stringent regulations on religious institutions than on many businesses” since the arrival of COVID-19, the disease caused by the CCP virus.

While California forbade any kind of indoor worship in most of the state, it allowed most retail operations to have 25 percent occupancy indoors and other businesses 50 percent or more occupancy, he added, writing: “When a state so obviously targets religion for differential treatment, our job becomes that much clearer.”

Justice Amy Barrett, joined by fellow Trump appointee Justice Brett Kavanaugh, wrote in a concurring opinion that she largely agreed with Gorsuch, but didn’t believe the court should block the prohibition on singing and chanting.

“The applicants bore the burden of establishing their entitlement to relief from the singing ban. In my view, they did not carry that burden—at least not on this record. As the case comes to us, it remains unclear whether the singing ban applies across the board (and thus constitutes a neutral and generally applicable law) or else favors certain sectors (and thus triggers more searching review),” she wrote.

“Of course, if a chorister can sing in a Hollywood studio but not in her church, California’s regulations cannot be viewed as neutral. But the record is uncertain, and the decisions below unfortunately shed little light on the issue.”

The three Democrat-appointed justice banded together in a dissenting opinion led by Obama appointee Justice Elena Kagan, who said justices on the court “are not scientists” and don’t “know much about public health policy.”

“Yet today the court displaces the judgments of experts about how to respond to a raging pandemic. The court orders California to weaken its restrictions on public gatherings by making a special exception for worship services. The majority does so even though the state’s policies treat worship just as favorably as secular activities (including political assemblies) that, according to medical evidence, pose the same risk of COVID transmission,” Kagan alleged.

“Under the court’s injunction, the state must instead treat worship services like secular activities that pose a much lesser danger. That mandate defies our caselaw, exceeds our judicial role, and risks worsening the pandemic.”

In an emailed statement, Newsom’s press secretary Daniel Lopez told The Epoch Times: ”The state of California has taken necessary steps throughout the pandemic to protect Californians from COVID-19 and prevent our health care system from being overwhelmed by the disease, particularly during the recent surge. While the Supreme Court enjoined the state’s restriction on indoor worship services in counties where COVID-19 is widespread, the Court left in place public health measures imposed to protect worshippers, their families, and the communities in which they live. We will continue to enforce the restrictions the Supreme Court left in place and, after reviewing the decision, and revise guidelines for worship services to continue to protect the lives of Californians.”