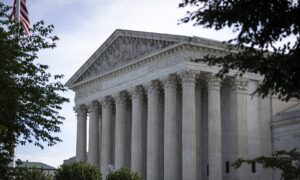 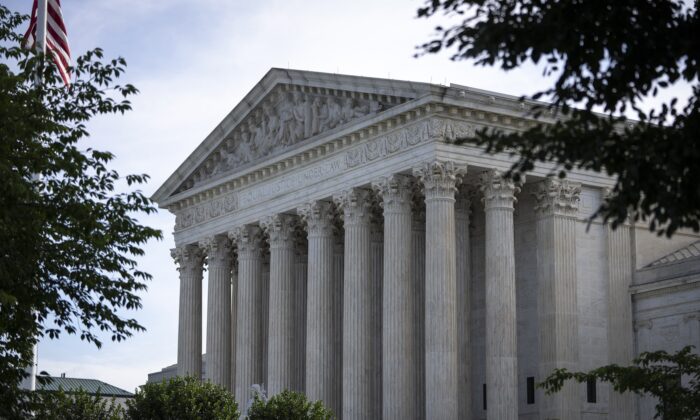 A general view of the U.S. Supreme Court in Washington on June 1, 2021. (Drew Angerer/Getty Images)
Judiciary

More than 200 Patent Trial and Appeal Board (PTAB) judges were unconstitutionally appointed, but the problem may be cured by having by having the board’s director exercise greater supervision of them, the Supreme Court ruled in a splintered decision.

The decision in the case of U.S. v. Arthrex Inc., court file 19-1434, which was consolidated with two other cases involving Arthrex, came June 21.

Chief Justice John Roberts wrote the opinion of the court.

In the decision, Roberts wrote that the patent adjudication system is administered by the Patent and Trademark Office (PTO), an executive agency within the Department of Commerce. The PTO is run by a single director appointed by the president, subject to Senate confirmation.

The lawsuit concerns the board, which was established by the Leahy-Smith America Invents Act of 2011. The board sits in panels of at least three members drawn from the Director, the Deputy Director, the Commissioner for Patents, the Commissioner for Trademarks, and more than 200 Administrative Patent Judges (APJs). The Secretary of Commerce appoints the members of the PTAB and APJs, except for the director.

Roberts explained that Arthrex Inc. develops medical devices and procedures for orthopedic surgery. In 2015, it received a patent on a surgical device it invented that reattaches soft tissue to bone without tying a knot. Arthrex soon claimed that two rival companies had infringed the patent. Three APJs on the PTAB panel concluded that a prior patent application “anticipated” the invention claimed by the patent, making Arthrex’s patent invalid.

Roberts noted that Arthrex argued that the APJs were principal officers and that meant their appointment by the Secretary of Commerce was unconstitutional. The Federal Circuit sided with Arthrex and invalidated the tenure protections for APJs.

In its ruling, the Supreme Court held 5-4 that the authority the APJs possess runs afoul of the Appointments Clause because they are not nominated by the president and confirmed by the Senate. The APJs’ “unreviewable authority” in patent proceedings is not consistent with their appointment by the secretary. Only principal officers who are constitutionally appointed may wield that level of authority, Roberts wrote. Justices Samuel Alito, Neil Gorsuch, Brett Kavanaugh, and Amy Coney Barrett concurred.

But the court also ruled 7-2 on what should be done, finding that the constitutional infirmity could be cured by letting the director of the PTO have the ability to review and modify decisions made by the APJs. Four justices partially concurred and partially dissented in various parts of the court’s opinion.

Roberts quoted Alexander Hamilton who wrote in Federalist 77 that assigning the nomination power to the president guarantees accountability for the appointees’ actions because the “blame of a bad nomination would fall upon the president singly and absolutely.” The “sole and undivided responsibility of one man will naturally beget a livelier sense of duty and a more exact regard to reputation,” the founding father wrote.

Roberts cited a 1997 precedent, writing that the Appointments Clause “adds a degree of accountability in the Senate, which shares in the public blame ‘for both the making of a bad appointment and the rejection of a good one.’”

“For the very first time, this Court holds that Congress violated the Constitution by vesting the appointment of a federal officer in the head of a department,” Thomas wrote.

“Just who are these ‘principal’ officers that Congress unsuccessfully sought to smuggle into the Executive Branch without Senate confirmation? About 250 administrative patent judges who sit at the bottom of an organizational chart, nestled under at least two levels of authority. Neither our precedent nor the original understanding of the Appointments Clause requires Senate confirmation of officers inferior to not one, but two officers below the President.” (Italics in original.)