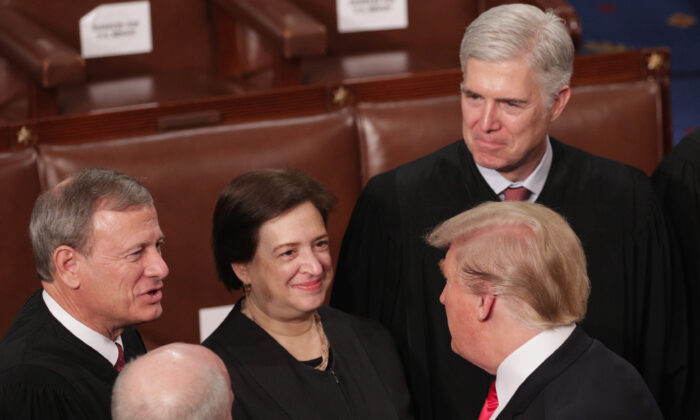 President Donald Trump greets Supreme Court Justices John Roberts, Elena Kagan, and Neil Gorsuch after the State of the Union Address in the chamber of the U.S. House of Representatives at the U.S. Capitol Building on Feb. 5, 2019. (Alex Wong/Getty Images)
Judiciary

In a 5–4 decision, the U.S. Supreme Court vacated a district court’s decision to strike down the Trump-era Section 401 Certification Rule for the Clean Water Act, thereby reinstating it.

The decision granted an emergency stay, responding to an application filed on March 21 by a group of states and energy industry associations against an October decision from the Northern District of California.

In their application, the group stated that they would “suffer irreparable harm” as a result of the rule remaining in place, saying that certain states had a history of abusing it.

Section 401 has been utilized to block natural gas pipelines and other projects.

“This court’s immediate review is necessary because EPA [Environmental Protection Agency] is likely to finish its new rulemaking before a full appeal can be briefed and decided,” the application reads.

The response to the application came from environmental groups, Native American tribes, and other states opposed to the Trump-era rule.

They stated that the rule harmed the environment, as well as that it “upended half a century’s worth of regulatory practice under Section 401 and sought to drastically limit the role states and tribes could play in Section 401 reviews.”

The Biden administration’s EPA can continue to rewrite the rule as planned. The agency has indicated that it intends to issue a proposed rule this spring and a final rule by the spring of 2023.

The foundation for the restored 2020 rule lies in a 2019 executive order (EO) from then-President Trump, EO 13868. In it, Trump ordered Section 401 to be revisited, saying that it and associated regulations “are hindering the development of energy infrastructure.”

“An applicant must show more than a likelihood of prevailing on the merits in the appellate court. It must also show an exceptional need for immediate relief. That means the applicant must (at the least) present evidence of irreversible injury—harm occurring during the appeals process that cannot be later redressed,” she wrote in her dissent.

Kagan later said the energy industry associations and states that applied for the say “have not identified a single project that a State has obstructed in the five months since the District Court’s decision” or “cited a single project that the court’s ruling threatens, or is likely to threaten, in the time before the appellate process concludes.”

She concluded by saying that her colleagues’ decision to grant relief “renders the Court’s emergency docket not for emergencies at all.”

CORRECTION: This article has been updated to amend the list of justices who supported the decision. The Epoch Times regrets the error.