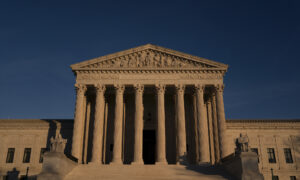 Sidney Powell speaking during a press conference at the Republican National Committee headquarters in Washington on Nov. 19, 2020. (Mandel Ngan/AFP via Getty Images)
Judiciary

The Supreme Court on March 1 formally rejected two of Sidney Powell’s lawsuits that challenged the results of the Nov. 3 election.

The Supreme Court didn’t offer any comment about dismissing the lawsuits. One lawsuit was filed in Wisconsin and the other in Arizona.

“The petitions for writs of mandamus are denied,” the court stated.

The Epoch Times has reached out to Powell for comment. She didn’t appear to have posted a comment about Supreme Court’s decision on her Telegram page on March 1.

Powell also announced that she launched a super PAC dedicated to freedom of speech, constitutional rights, and “the sacred right of free and fair elections.”

Powell in late January said she created the Restore the Republic Super PAC, which is an independent expenditure-only political action committee that may receive unlimited contributions and may engage in unlimited political spending on initiatives, provided it doesn’t coordinate directly with campaigns or candidates.

“The American people deserve a voice that exposes and rejects the self-interest of political parties, the control of tech giants, and the lies of the fake news,” she said.

Meanwhile, after the Jan. 6 Capitol breach, Twitter suspended the accounts belonging to a number of conservatives, including Powell. Powell, in a statement to The Epoch Times at the time, said there “was no warning at all” about her Twitter account being deleted, adding that “it is stunning.”

“Twitter’s actions and those of banks who shut down accounts of people who went to DC are fascism in its purest form. … It is a communist coup that has been long and well-planned,” she said in a January email.

Powell, who successfully defended retired Army Lt. Gen. Michael Flynn, was introduced by the Trump legal team in November 2020, although the team later distanced themselves from her and said she was now working independently.

Separately, Dominion Voting Systems filed a $1.3 billion lawsuit against Powell as well as similar lawsuits against Rudy Giuliani and Mike Lindell. Powell’s lawyer, Lin Wood, implied in statements last month that she did nothing wrong.

“Sidney and I will not be intimidated,” Wood said, adding that he and Powell “will not go quietly into the night.”