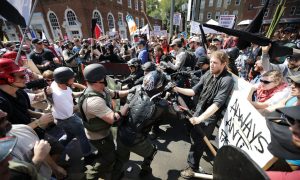 The Supreme Court rejected a case that challenged California’s electoral process by claiming that the state’s “so-called winner-take-all system” dilutes their votes.

Attorneys for Chavez and Rodriguez—who are both reportedly Republicans—argued (pdf) that California’s system “results in the appointment of members of only one political party to the nation’s largest electoral college delegation.” Chavez previously served in the California State Assembly and ran during the 2018 midterm election in California’s 49th Congressional District.

According to their lawsuit, such a process “is not within the Constitution” and “is instead a partisan invention by the states that has become the default for the nation.” The suit also asserts that the process “severs the connection between voters and presidential candidates.”

But on June 14, the Supreme Court declined (pdf) to hear the lawsuit in an unsigned order. The court didn’t provide an explanation in denying certiorari.

Lawyers for Democratic Gov. Gavin Newsom, the defendant in the suit, pushed back against it by claiming “there is no cause for concern,” and California “does not treat any voter or group of voters differently from any other or prevent anyone from casting a vote.”

“While a winner-take-all system of awarding presidential electors certainly ‘raises the stakes of victory,’ it does not interfere with petitioners’ ability to associate freely with the political party of their choice or otherwise deprive them of an ‘equal opportunity to win votes,'” Newsom’s attorneys wrote.

The decision to not hear the case suggests that the Supreme Court justices have little appetite for election-related cases.

Starting in December 2020, the Supreme Court declined to hear post-Nov. 3, 2020, lawsuits filed on behalf of former President Donald Trump. Texas Attorney General Ken Paxton filed a suit that challenged the 2020 results in four battleground states, but that lawsuit was rejected by the high court, which argued that Texas lacked legal standing to sue four states that were hotly contested after the general election.

In April, the court similarly rejected a Republican-backed lawsuit regarding a Pennsylvania voting dispute over the state’s extended mail-in balloting law, issuing a two-line order describing the case “as moot.” Before that, several third-party lawsuits filed on behalf of lawyer Sidney Powell challenging the results in Wisconsin and Pennsylvania were formally rejected.

The plaintiffs’ lawyers didn’t respond to a request for comment by press time.