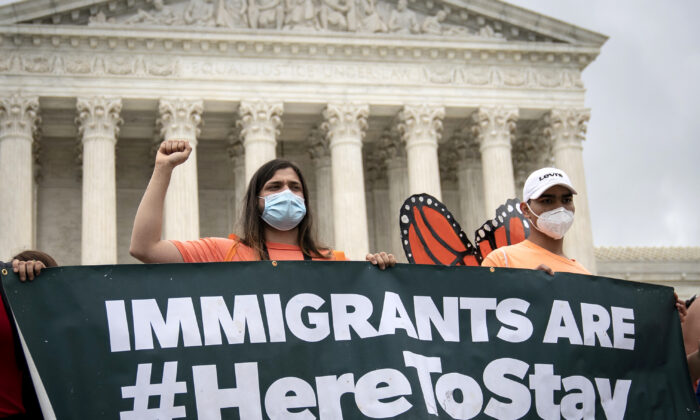 DACA recipients and their supporters rally outside the U.S. Supreme Court in Washington, on June 18, 2020. (Drew Angerer/Getty Images)
By Matthew Vadum

The Trump administration failed to follow the law when it tried to rescind DACA, then-President Barack Obama’s program that temporarily shielded young people who came to the United States illegally from being deported, the Supreme Court ruled.

Although the program could yet be abolished in the future if the proper procedure is followed, as the court acknowledged in its June 18 ruling, the decision sets up an election-year fight over the Deferred Action for Childhood Arrivals (DACA) program that has offered relief to about 700,000 individuals.

When President Donald Trump announced in 2017 he would end DACA, he expressed sympathy for DACA recipients and said his cancellation of the program would force Democratic lawmakers to make a deal to allow the young people to stay. No such deal was reached in Congress.

Various federal courts blocked the Trump administration from terminating DACA and ordered U.S. Citizenship and Immigration Services to keep taking applications from DACA recipients. In oral arguments on Nov. 12, 2019, the administration urged the court to strike down DACA as unconstitutional because it never was authorized by Congress.

Republicans have long called DACA a brazen power grab, a usurpation of Congress’s constitutionally prescribed role in making laws. Democrats respond that the young people aren’t at fault and that creating the program was morally the right thing to do.

An hour after the decision was released, President Donald Trump took to Twitter to denounce the high court.

“As President of the United States, I am asking for a legal solution on DACA, not a political one, consistent with the rule of law. The Supreme Court is not willing to give us one, so now we have to start this process all over again,” he wrote.

It was the second major defeat at the Supreme Court for the Trump administration this week. The other was the court’s controversial 6–3 ruling in Bostock v. Clayton County, Georgia, which held that employees can’t be fired from their jobs because of sexual orientation or gender identity.

Trump’s presumptive opponent in the election, Democrat Joe Biden, who was vice president when Obama created DACA by executive action, hailed the court ruling, saying it’s “a victory made possible by the courage and resilience of hundreds of thousands of DACA recipients who bravely stood up and refused to be ignored.”

Biden added, “As president, I will immediately work to make it permanent by sending a bill to Congress on day one of my administration.”

An array of industry figures such as Apple CEO Tim Cook hailed the ruling. On Twitter, Cook said his company would “keep fighting until DACA’s protections are permanent.”

But Dale L. Wilcox, executive director and general counsel of the Immigration Reform Law Institute, condemned the new ruling in a statement obtained by The Epoch Times.

Apart from its unconstitutionality, “DACA sends the message that U.S. immigration law is malleable and subject to political whims.” This kind of decision gives “prospective immigrants little incentive to comply with our laws. We are allowing an anti-borders philosophy to take root, so more disrespect for our laws is sure to come.”

The heavily splintered 5–4 ruling in the case cited as Department of Homeland Security (DHS) v. Regents of the University of California, was written by Chief Justice John Roberts, traditionally considered a member of the court’s conservative bloc. His opinion was joined by liberal Justices Ruth Bader Ginsburg, Stephen Breyer, Sonia Sotomayor, and Elena Kagan.

“The dispute before the Court is not whether DHS may rescind DACA. All parties agree that it may. The dispute is instead primarily about the procedure the agency followed in doing so,” Roberts wrote.

“We do not decide whether DACA or its rescission are sound policies. … We address only whether the agency complied with the procedural requirement that it provide a reasoned explanation for its action.”

DHS failed to do so and therefore violated the APA, the court found.

“We conclude that the acting secretary did violate the [Administrative Procedure Act],” and that the decision to rescind DACA therefore “must be vacated,” Roberts wrote. “The appropriate recourse is therefore to remand to DHS, so that it may consider the problem anew.”

Conservative Justices Clarence Thomas, Samuel Alito, Neil Gorsuch, and Brett Kavanaugh dissented from the majority opinion in parts, but concurred in other parts.

“Today’s decision must be recognized for what it is: an effort to avoid a politically controversial but legally correct decision,” Thomas wrote.

Thomas accused the majority of fashioning their own extra-legal solution to the DACA problem, a move that’s bound to lead to more political friction.

“The Court could have made clear that the solution respondents seek must come from the Legislative Branch. Instead, the majority has decided to prolong DHS’ initial overreach by providing a stopgap measure of its own. In doing so, it has given the green light for future political battles to be fought in this Court rather than where they rightfully belong—the political branches. Such timidity forsakes the Court’s duty to apply the law according to neutral principles, and the ripple effects of the majority’s error will be felt throughout our system of self-government.”

Thomas also wrote that the majority opinion had the perverse effect of forcing future presidents to stand by executive actions taken by their predecessors.