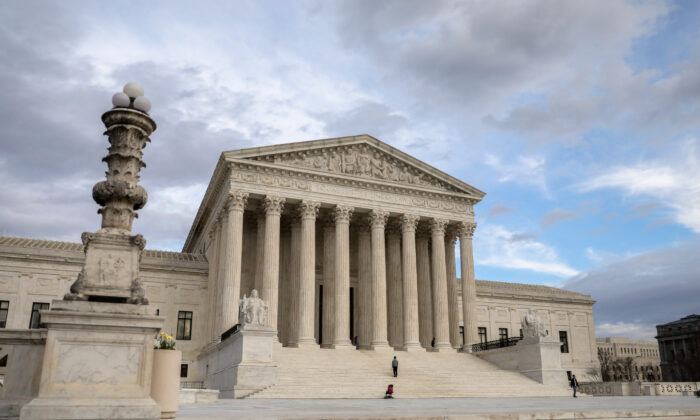 The Supreme Court has postponed another session of oral arguments in order to comply with guidance to mitigate the spread of the CCP virus pandemic.

The top court said in a statement that oral arguments scheduled between April 20-29 are postponed in keeping with public health guidance. This comes after the court postponed a number of cases scheduled for the March session, including oral arguments in challenges to assess President Donald Trump’s financial records.

There are 15 deaths and 757 confirmed cases of COVID-19, the disease the CCP virus causes, in Washington as of Thursday, according to state officials. Meanwhile, the surrounding states, Maryland and Virginia, have more than 2,000 cases each.

The court did not indicate when the arguments will resume this term but stated that it will consider rescheduling some postponed cases from the March and April sessions before the term ends if circumstances permit.

The court also said it is open to considering “a range of scheduling options and other alternatives if arguments cannot be held in the courtroom before the end of the term,” but it did not specify the types of alternatives it was considering. Some federal and state courts have turned to video and telephone conferences for oral arguments during the pandemic.

Decisions on cases that have already been argued will continue to be released on the court’s website. The court also emphasized that the justices will proceed to hold their private conferences to consider issues, like cases, to be added to the docket.

Some of the cases (pdf) impacted by the postponement include two cases on the enforceability of state laws against “faithless electors” and an appeal from the Little Sisters of the Poor on the contraception mandate.

Earlier on Friday, the court spokeswoman told reporters that all justices are healthy and took part in their regular private conference via phone.

The CCP virus, commonly known as novel coronavirus, has shown to be more dangerous to the elderly and six of the nine justices are 65 years or older. Only Justices Neil Gorsuch, Brett Kavanaugh, and Elena Kagan are under the age of 65. Meanwhile, Justices Ruth Bader Ginsburg, Stephen Breyer, and Clarence Thomas are over 70.

The court building also remains closed to the public but will be opened for official business.

As of Friday, there are more than 270,ooo confirmed cases of the virus across the United States and over 6,900 deaths as well as nearly 9,500 recoveries, according to data compiled by Johns Hopkins University.