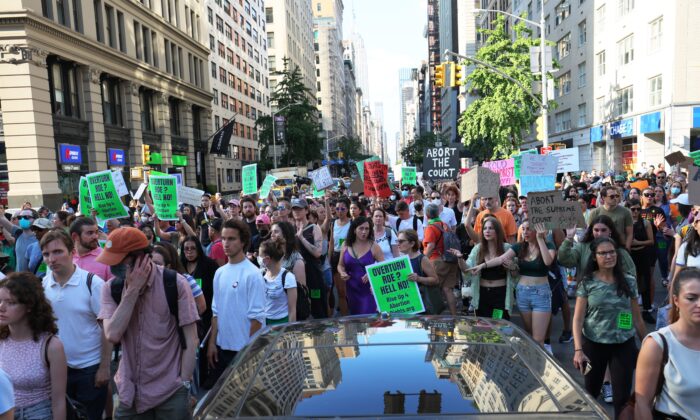 The latest updates after the Supreme Court’s decision to overturn Roe v. Wade.

Police fired tear gas from the windows of the Arizona Capitol building to disperse hundreds of people demonstrating outside, as lawmakers briefly huddled in a basement.

The lawmakers were working to complete their 2022 session as thousands of protesters gathered on the Capitol grounds in Phoenix on Friday night, divided into groups condemning and supporting the Supreme Court’s Roe v. Wade decision.

SWAT team members with the Department of Public Safety fired tear gas from the building to disperse the protesters. KPHO-TV reported the officers opened fire when several protesters started banging on glass doors of the building.

It wasn’t immediately known if there were injuries or arrests.

The incident sent Senate lawmakers into the basement of the building for about 20 minutes, said Democratic Sen. Martin Quezada. Stinging tear gas wafted through the Capitol afterward, forcing the Senate to move its proceedings to a hearing room instead of the Senate chamber.

Thousands of demonstrators took to the streets Friday in cities nationwide to protest the overturning of Roe v. Wade. Most carried signs, chanted slogans, and listened to speeches.

The ban contains narrow exceptions for rape and incest if those crimes are reported to law enforcement, and for serious risk to the life or health of the mother, as well as confirmed lethal birth defects.

Legislative leaders said they had no plans to expand restrictions on abortion until they better understood the effects of Utah’s law.

State Sen. Dan McKay, the Republican who sponsored the trigger law, said it would be wrong for Utah women to pursue abortions in neighboring states but he had no immediate plans to press for limits on their ability to travel there.

Protests were taking place in New York, Washington, Los Angeles, and San Francisco, as well as in Chicago, Seattle, and other cities.

Abortion clinics, pregnancy centers, churches, and police are ramping up security measures in some areas.

A ban on most abortions at the first detectable fetal heartbeat became the law in Ohio on Friday following the U.S. Supreme Court decision overturning Roe v. Wade.

Enforcement of Ohio’s 2019 “heartbeat” ban had been on hold for nearly three years under a federal court injunction. The state attorney general, Republican Dave Yost, asked for that to be dissolved because of the high court’s ruling, and a federal judge agreed hours later.

Abortion providers across Arizona halted procedures Friday as they try to determine whether a law dating to pre-statehood days means their personnel could face prison time after the U.S. Supreme Court overturned Roe v. Wade.

The possibility of prosecutions was just too risky, said Brittany Forteno, president and CEO of Planned Parenthood Arizona.

She said the state’s largest abortion provider is working with its attorneys to “understand Arizona’s tangled web of conflicting laws.”

At least two other large providers in Tucson and Phoenix followed suit.

At issue is a law that dates to at least 1901, 11 years before Arizona became a state. It subjects anyone who provides abortion care to a possible two to five years in prison. Republicans in the state Senate believe the pre-Roe law is enforceable.

Abortions swiftly came to a stop in Alabama as a 2019 state abortion ban took effect, making it a felony to perform an abortion at any stage of pregnancy, with no exceptions for rape or incest victims.

All three clinics in the state stopped providing services Friday morning after a federal judge granted the state’s request to lift an injunction and allow the state to enforce the ban, after the U.S. Supreme Court overturned Roe v. Wade.

The only exception to the state’s abortion ban is for the sake of the mother’s health.

“I could not be more proud as a governor, a Christian, and a woman to see this misguided and detrimental decision overturned,” Ivey said. “Alabama will continue standing up for our unborn babies, our mothers, and our families.”

The Arkansas Department of Health on Friday notified the state’s two abortion providers that its ban on the procedure had taken effect under a law triggered by the Supreme Court ruling. The law bans abortions except to protect the life of the mother in a medical emergency.

The notices advise the facilities that performing an abortion in violation of the law is punishable by up to 10 years in prison and a fine of up to $100,000.

Planned Parenthood said it would no longer be able to offer abortions at its Little Rock facility.

Jeffrey Hons of Planned Parenthood South Texas said the group’s abortion services in Texas have been “paused” statewide as they await guidance from their attorneys.

The announcement comes Friday, just hours after the U.S. Supreme Court overturned the right established in Roe v. Wade to terminate a pregnancy. The issue reverts to the states, many of which have taken steps to curtail or ban abortions.

A website affiliated with Planned Parenthood is advising that it is legal to travel out of state to get an abortion.

“We are a pro-choice city,” she said at a news conference held at the local branch of Planned Parenthood. “Nothing has changed in Washington, D.C.”

But Bowser cautioned that the district is vulnerable because it is not a state and Congress retains oversight over it.

The Democratic governors of California, Washington, and Oregon on Friday vowed to help women who travel to the West Coast seeking abortions following the Supreme Court’s decision to overturn Roe v. Wade.

The three states issued a joint “multi-state commitment” saying they will work together to defend patients and medical professionals providing reproductive health care.

They also pledged to “protect against judicial and local law enforcement cooperation with out-of-state investigations, inquiries, and arrests” regarding abortions performed in their states.

Republican leaders are lauding the U.S. Supreme Court’s overturning of the Roe v. Wade decision that legalized abortion at a national level, while Democrats are decrying what they call the revocation of women’s rights.

Senate Minority Leader Mitch McConnell (R-Ky.), who played a role in preserving the seat left vacant by the late Supreme Court Justice Antonin Scalia and paving the way for a Republican-appointed conservative majority, said Friday’s ruling is a “historic victory.”

“The Court has corrected a terrible legal and moral error, like when Brown v. Board overruled Plessy v. Ferguson,” McConnell wrote in a statement, referencing the 1954 decision that effectively ended racial segregation in public schools.

“The Justices applied the Constitution. They carefully weighed the complex factors regarding precedent. The Court overturned mistaken rulings that even liberals have long admitted were incoherent, restoring the separation of powers,” he continued. “I commend the Court for its impartiality in the face of attempted intimidation.”

House Speaker Nancy Pelosi (D-Calif.) said at her press conference that there was “no point in saying ‘Good morning,’ because it certainly is not one.”

“Today, the Republican-controlled Supreme Court has achieved the GOP’s dark and extreme goal of ripping away women’s right to make their own reproductive health decisions,” Pelosi said. “Because of Donald Trump, Mitch McConnell, the Republican Party, and their supermajority on the Supreme Court, American women today have less freedom than their mothers.”

Pelosi also made unsubstantiated claims about what the ruling means for other issues related to pregnancy. “GOP extremists are even threatening to criminalize contraception, as well as in-vitro fertilization and post-miscarriage care,” she said, although the justices explicitly said in the majority opinion that this will not undo cases on contraception.

Biden referred to former President Donald Trump in his speech by name, saying that three justices that voted to overturn Roe v. Wade were appointed by him. The current president then alleged that Friday’s decision was the result of decades of conservative and religious groups’ attempts to get the law struck down.

Biden then claimed that women’s reproductive health around the United States is now “at risk,” although states that choose to pass laws allowing abortions are still free to do so under the Friday ruling. Biden noted that women can still travel from a state that restricts abortion to another state that doesn’t have such laws to obtain one.

Later in his speech, Biden called on people to vote for candidates who will work to pass laws that support abortions during the 2022 midterms, suggesting that Democrats will likely use the Supreme Court ruling as a push to get their candidates elected to Congress.

“The Justice Department strongly disagrees with the Court’s decision,” Garland wrote. “This decision deals a devastating blow to reproductive freedom in the United States. It will have an immediate and irreversible impact on the lives of people across the country. And it will be greatly disproportionate in its effect—with the greatest burdens felt by people of color and those of limited financial means.”

“The Supreme Court has eliminated an established right that has been an essential component of women’s liberty for half a century—a right that has safeguarded women’s ability to participate fully and equally in society,” Garland wrote. “And in renouncing this fundamental right, which it had repeatedly recognized and reaffirmed, the Court has upended the doctrine of stare decisis, a key pillar of the rule of law.”

Former President Donald Trump on June 24 praised the Supreme Court after a majority of justices overturned Roe v. Wade, delivering the ability to regulate abortion back to states.

“This is following the Constitution, and giving rights back when they should have been given long ago,” Trump, a Republican, told Fox News.

The court’s decision was in a case brought by the state of Mississippi against Jackson Women’s Health Organization, an abortion clinic.

Justices found that Roe was wrongly decided in 1973, as was a ruling in 1992 that reaffirmed Roe.

Trump, asked by Fox whether he helped bring about the decision, said, “God made the decision.”

President Joe Biden, a Democrat, decried the ruling, saying in prepared remarks that the court “took away a right from the American people that it already recognized.”

“It was three justices named by one president, Donald Trump, who were the core of today’s decision to upend the scales of justice,” he added later.

The reaction among members of Congress largely split along party lines. Republicans joined Trump in cheering the decision while Democrats decried the ruling.

The Guttmacher Institute, a research group, says that 13 states have “trigger laws” that bar most abortions that will take effect immediately after the ruling Friday. They are Arkansas, Idaho, Kentucky, Louisiana, Mississippi, Missouri, North Dakota, Oklahoma, South Dakota, Tennessee, Texas, Utah, and Wyoming.

Five more states had respective bans on abortion from the time before the Roe v. Wade ruling in 1973. They include Alabama, Arizona, Michigan, West Virginia, and Wisconsin.

Georgia, Iowa, Ohio, and South Carolina, according to the Institute, have laws that ban abortions after the 6-week mark. Those laws will be revisited after the overturning of Roe v. Wade.

Meanwhile, the legislatures of Florida, Indiana, Montana, and Nebraska appear likely to ban abortion based on previous and current efforts, the group says.

Overall, 26 of 50 U.S. states are likely or certain to ban abortion after the ruling was handed down Friday, the Institute says.

The Supreme Court on June 24 overturned Roe v. Wade, the seminal 1973 precedent which struck down a swath of federal and state laws restricting abortion and largely legalized the procedure nationwide.

The court, in a 6–3 ruling powered by its conservative majority, upheld a Mississippi law that bans abortion after 15 weeks of pregnancy and to overturn Roe. Chief Justice John Roberts concurred with the court’s conservatives, but argued he would have upheld the Mississippi law without taking the additional step of erasing the Roe precedent altogether.