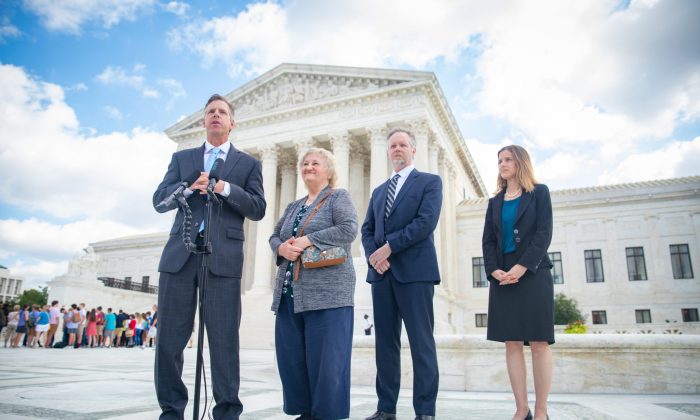 WASHINGTON—The conservative wing of the Supreme Court flexed its muscles last week by overturning a 34-year-old precedent, making it easier for property owners to seek legal redress in federal courts without first having to file suit in state courts after their property is taken.

The landmark ruling, which came June 21 in a case known as Knick v. Township of Scott, Pennsylvania, overturned a decision by the 3rd Circuit Court of Appeals.

Kagan and her left-leaning colleagues were similarly incensed with the court’s landmark 5-4 ruling last year in Janus v. AFSCME, which ended compulsory union dues for public employees. In a dissent, Kagan wrote that the majority opinion “overthrows a decision entrenched in this nation’s law—and in its economic life—for over 40 years.”

In the Supreme Court case at hand, Rose Knick, the property owner, urged the justices on Jan. 16 to overturn Williamson County Regional Planning Commission v. Hamilton Bank of Johnson City (1985), claiming a violation of her Fifth Amendment rights and asserting that her property had been unconstitutionally taken by the township.

In 2013, a rural township in eastern Pennsylvania claimed a forgotten cemetery existed on Knick’s 90-acre farm and demanded that she open her property to the public or face fines of $600 per day.

The now-defunct precedent forced property owners like her to sue in state courts before filing in federal courts, and, according to her lawyers, failed to place property rights on an equal footing with other rights such as free speech and due process.

But Chief Justice John Roberts, writing for the majority in the 5-4 decision, said the ruling in “Williamson County was not just wrong. Its reasoning was exceptionally ill-founded and conflicted with much of our takings jurisprudence.”

The problem with the overturned precedent is that adjudicating a takings claim at the state level generally prevents action at the federal level, he wrote.

Concurring with the majority, Justice Clarence Thomas filed his own opinion, objecting to the legal hurdles takings plaintiffs had to leap under the Williamson County ruling.

“This ‘sue me’ approach to the Takings Clause is untenable,” Thomas wrote.

“The Court’s decision to reject barriers that unfairly deny property owners their day in court sends a message that property rights are just as sacred as all other rights,” he said.

“Thanks to Rose’s courage and the Supreme Court’s careful examination of this issue, property owners should now receive a prompt and fair federal hearing when the government takes their property for public use but fails to pay compensation.”

According to PLF, the decision will change the way takings claims are litigated nationwide, offering speedier and more certain relief to property owners whose property is taken by state and local governments.

In her dissenting opinion, Kagan bemoaned the court majority’s willingness to overrule precedent.

“[I]t is hard to overstate the value, in a country like ours, of stability in the law,” she wrote.

When the Supreme Court “overturned another longstanding precedent,” Franchise Tax Board of California v. Hyatt, on May 13, Justice Stephen Breyer penned a dissent, Kagan wrote. In that 5-4 opinion, the court overturned a 40-year-old precedent that allowed states to be sued in the courts of other states.

“He wrote of the dangers of reversing legal course ‘only because five Members of a later Court’ decide that an earlier ruling was incorrect,” Kagan wrote. “He concluded: ‘Today’s decision can only cause one to wonder which cases the Court will overrule next.’

“Well, that didn’t take long,” she concluded. “Now, one may wonder yet again.”

Roberts fired back in the majority opinion against what he called Kagan’s “extreme assertions.”

“Governments need not fear that our holding will lead federal courts to invalidate their regulations as unconstitutional. As long as just compensation remedies are available—as they have been for nearly 150 years—injunctive relief will be foreclosed.”