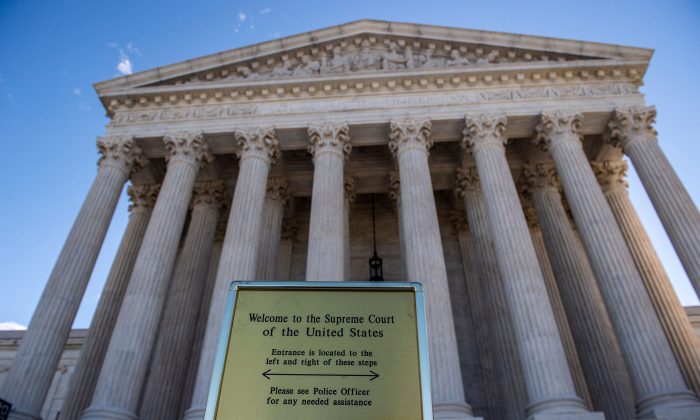 The Supreme Court building in Washington on April 15, 2019. (ERIC BARADAT/AFP/Getty Images)
US News

The U.S. Patent and Trademark Office, which administers the intellectual property statute also known as the Trademark Act of 1946, previously rejected a trademark application for the word “F**T” (letters omitted) by clothes-maker and artist Erik Brunetti, who has said F**T stands for “Friends U Can’t Trust.” The designs include shirts, hoodies, and jackets.

Among the shirts is one with a decal featuring an enlarged $100 bill featuring a portrait of Osama bin Laden; others appear with the phrases “We are f**t” and “Fight crime; buy a gun.”

Although Brunetti, who seeks the trademark so he can legally pursue copycats and counterfeiters more easily, insists the word is to be pronounced letter by letter, people commonly pronounce it as if it were the equivalent of a past participle form of a well-known word of profanity.

“That common perception caused difficulties for Brunetti when he tried to register his mark with the U.S. Patent and Trademark Office (PTO),” Justice Elena Kagan wrote in the majority opinion for the court June 24 in Iancu v. Brunetti, in which Justices Clarence Thomas, Samuel Alito, Neil Gorsuch, and Brett Kavanaugh joined.

Kagan wrote that PTO’s examining attorney found the word was “a total vulgar” mark and therefore “unregistrable,” and an appeals board found it “highly offensive,” “vulgar,” and having “decidedly negative sexual connotations.” The board also found that imagery associated with the products offered exhibited “extreme nihilism” and “antisocial” behavior, and that the mark “communicated ‘misogyny, depravity, [and] violence.’”

Nonetheless, the majority of the justices found that the ban on marks such as the one at issue was arbitrary and unconstitutional.

“The ‘immoral or scandalous’ bar is substantially overbroad,” Kagan wrote for the court. “There are a great many immoral and scandalous ideas in the world (even more than there are swearwords), and the Lanham Act covers them all. It therefore violates the First Amendment.”

Other justices wanted to get their views on the record, filing various separate opinions concurring in part and dissenting in part with the majority opinion.

In a concurring opinion, Alito made it clear he wasn’t embracing nihilism.

“Our decision is not based on moral relativism but on the recognition that a law banning speech deemed by government officials to be ‘immoral’ or ‘scandalous’ can easily be exploited for illegitimate ends. Our decision does not prevent Congress from adopting a more carefully focused statute that precludes the registration of marks containing vulgar terms that play no real part in the expression of ideas.”

Chief Justice John Roberts wrote in a separate opinion that the government, “meanwhile, has an interest in not associating itself with trademarks whose content is obscene, vulgar, or profane … The First Amendment protects the freedom of speech; it does not require the Government to give aid and comfort to those using obscene, vulgar, and profane modes of expression.”

Brunetti’s case seems to have gotten an assist from the Supreme Court, when it ruled in another First Amendment case, Matal v. Tam in 2017, that an Asian American band called The Slants couldn’t be refused trademark protection because its name is viewed as racially disparaging. The band said it used the name to reclaim a racial slur.

A member of the band sued after the PTO declined the registration and refused its appeal, referencing the Lanham Act, which precludes any trademark that could, in the words of the Supreme Court’s ruling, “disparage … or bring … into [contempt] or disrepute” any “persons, living or dead.”

“The disparagement clause violates the First Amendment’s Free Speech Clause,” Alito wrote for the court. “Contrary to the Government’s contention, trademarks are private, not government speech.”