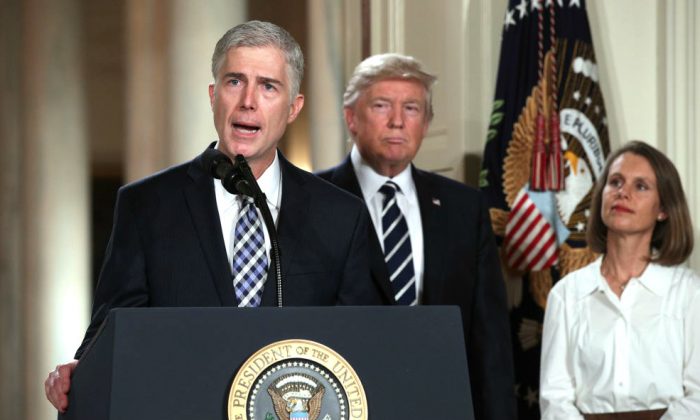 Judge Neil Gorsuch delivers brief remarks after being nominated by U.S. President Donald Trump to the Supreme Court with his wife Marie Louise Gorshuch during a ceremony in the East Room of the White House in Washington, DC. on Jan. 31, 2017. (Alex Wong/Getty Images)
Politics

Democrats talk filibuster, while Trump talks of the nuclear option
By The Associated Press

DENVER—Neil Gorsuch, named Jan. 31 as President Donald Trump’s nominee to the U.S. Supreme Court, has a solidly conservative pedigree that has earned him comparisons to the combative justice he would replace, Antonin Scalia. Confirmation of Gorsuch will hinge on winning over eight Democratic senators, or on the Republicans choosing the so-called nuclear option—eliminating the filibuster for Supreme Court appointments.

Gorsuch clerked for two Supreme Court justices and worked in President George W. Bush’s Justice Department before being appointed to the federal bench and authoring a series of sharply written, conservative opinions.

Senate Minority Leader Chuck Schumer (D-N.Y.) said he has “very serious doubts” about whether Gorsuch should be confirmed.

Schumer and other Democratic senators issued statements that criticized Gorsuch as not being independent. Schumer said Gorsuch has “hewed to an ideological approach to jurisprudence that makes me skeptical that he can be a strong, independent justice on the court.”

The day after Trump named Gorsuch, Neal K. Katyal, a Democrat and an acting solicitor general in the Obama administration, published an opinion piece in The New York Times responding to this criticism.

Katyal said, “[Gorsuch’s] years on the bench reveal a commitment to judicial independence—a record that should give the American people confidence that he will not compromise principle to favor the president who appointed him.”

Katyal said his views were based on having seen Gorsuch “up close and in action.” “He brings a sense of fairness and decency to the job, and a temperament that suits the nation’s highest court.”

Gorsuch has also won praise among liberals and others in the Colorado legal community for his fair-mindedness and defense of the underdog.

“He is a very, very smart man. His leanings are very conservative, but he’s qualified to be on the Supreme Court,” said Denver plaintiff’s attorney David Lane. “I don’t know that Judge Gorsuch has a political agenda, and he is sincere and honest and believes what he writes.”

A judge on the 10th Circuit Court of Appeals in Denver, Gorsuch lives in the hyper-liberal college town of Boulder and teaches at the University of Colorado’s law school, also a progressive bastion.

“I think this should be Merrick Garland’s seat,” said Jordan Henry, one of Gorsuch’s students there and a self-described liberal, referring to President Obama’s nominee for the vacancy last year who was never considered by the Republican-controlled U.S. Senate. But she described Gorsuch as an eager mentor with a brilliant mind, always solicitous of students’ opinions.

“He’s dedicated to the pursuit of truth in the justice system,” said Henry, 29. “I do take some comfort that he can be a Trump choice.”

A Colorado native, Gorsuch earned his bachelor’s degree from Columbia University in three years, then earned a law degree from Harvard University, in the same class as Barack Obama. He clerked for Supreme Court justices Byron White, a fellow Coloradan, and Anthony Kennedy before earning a philosophy degree at Oxford University and working for a prominent Washington law firm.

He served for two years in Bush’s Justice Department before Bush appointed him to a seat on the 10th Circuit in 2006.

Gorsuch has contended that courts give too much deference to government agencies’ interpretations of statutes, a deference that stems from a Supreme Court ruling in a 1984 case.

After Trump introduced him from the East Room of the White House in a primetime televised address on Jan. 31, Gorsuch summed up his minimalist judicial philosophy and focus on impartial judgment.

“A judge who reaches every outcome he wishes is likely a very bad judge,” he said, paraphrasing a favorite line of Scalia.

Lane, who frequently clashes with law enforcement, praised Gorsuch as fair and open-minded. Lane won a $1.8 million jury verdict against the Denver Police Department in a brutality and wrongful arrest case. The city appealed and the case ended up before Gorsuch.

Lane said Gorsuch tore into the city’s lawyers and urged them to go to mediation rather than drag out appeals for years to deny the plaintiffs their reward. The mediation led the case to be settled for $1.6 million.

Gorsuch has also drawn attention for siding with religious employers against the Obama administration’s requirement that they provide health insurance that covers contraception. He also wrote a book arguing against assisted suicide.

Marcy Glenn, a Denver attorney and Democrat, recalls two cases before Gorsuch in which she represented underdogs. In one, a college student faced criminal libel charges for mocking a professor; the court upheld the student’s right to file a claim against the prosecutor.

In the second, homeowners sued over illnesses stemming from an old nuclear weapons facility outside Denver. Gorsuch revived their class-action lawsuit in a novelistic, 38-page ruling that began, “Harnessing nuclear energy is a delicate business.”

“He issued a decision that most certainly focused on the little guy,” Glenn said.

Of course, unless the filibuster is dispensed with, Gorsuch’s fate depends on the decisions reached by the 48 senators in the Democratic caucus.

Sen. Jeff Merkley of Oregon has already announced he will filibuster Gorsuch, but one Democrat has broken ranks. “I am not going to filibuster anyone,” West Virginia Sen. Joe Manchin told the Weekly Standard.

The conservative group Judicial Crisis Network said in a statement on its website that it was launching a $10 million campaign to hold vulnerable Democratic senators accountable for their votes on Gorsuch.

“We will force vulnerable Senators up for re-election in 2018, like Joe Donnelly and Claire McCaskill, to decide between keeping their Senate seats or following Chuck Schumer’s liberal, obstructionist agenda,” said Carrie Severino, chief counsel and policy director of the Judicial Crisis Network.

The Judicial Crisis Network has reason to think it can influence some Democrats. In 2018, Democrats must defend 23 senate seats, 10 of whom are running in states carried by Trump.

Emily’s List, the National Abortion Rights Action Leagues, and other progressive organizations are said to be preparing campaigns to oppose Gorsuch.

The Washington Post reported that senior Democratic senators declined invitations from Trump to a reception to meet Gorsuch.

“I can only hope that both Democrats and Republicans can come together for once for the good of the country,” Trump said when he introduced Gorsuch.

The next day, Trump told reporters, “If we end up with that gridlock, I would say, ‘If you can, Mitch, go nuclear,'” referring to Senate majority leader Mitch McConnell.