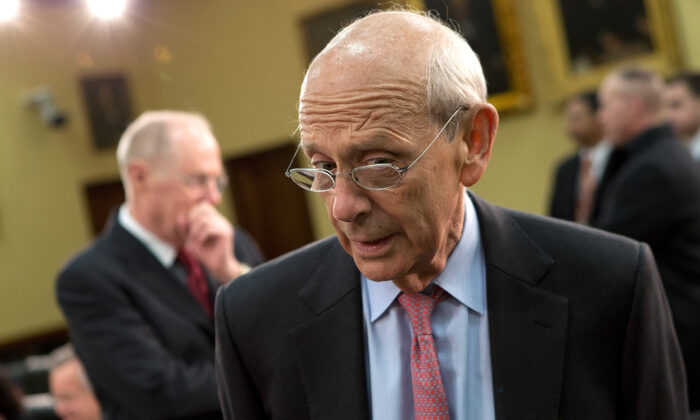 Justice Stephen Breyer, who at 82 is the oldest member of the U.S. Supreme Court, said in an interview with Slate published on Tuesday that while he intends to retire “eventually,” he has no immediate plans to do so.

Breyer remarked on his eventual retirement while responding to a question about whether he supports term limits for Supreme Court justices, an issue that has become a political hot potato amid liberal frustration with the high court’s conservative tilt under President Donald Trump’s tenure.

“Well, I can’t answer this question because it is too close to something that is politically controversial. I mean, eventually I’ll retire, sure I will. And it’s hard to know exactly when,” said Breyer, a Clinton appointee.

After Justice Amy Coney Barrett’s recent confirmation to the Supreme Court gave conservatives a 6-3 advantage, a number of Democrats floated radical proposals like expanding the number of seats on the high bench, known as court-packing.

“Expand the court,” wrote Rep. Alexandria Ocasio-Cortez (D-N.Y.) on Twitter in a widely shared post on Oct. 27 before she accused Republicans of steamrolling over the objections of Democrats, who she said the GOP sees as pushovers.

“Republicans do this because they don’t believe Dems have the stones to play hardball like they do. And for a long time they’ve been correct. But do not let them bully the public into thinking their bulldozing is normal but a response isn’t. There is a legal process for expansion,” she wrote in a follow-up tweet.

The legal process for expanding the number of seats on the Supreme Court would involve the House and Senate passing legislation to that effect, and the president signing it into law. Since Republicans oppose court-packing, such a move would only be possible in the near-term if Democrats win both Senate runoffs in Georgia and Democratic presidential nominee Joe Biden prevails in the contested election and is sworn in on Jan. 20.

Biden has proposed a bipartisan commission to evaluate the court system, but has not explicitly ruled out expanding the number of seats on the high court.

“If elected, what I will do is I’ll put together a national commission of bipartisan commission of scholars, constitutional scholars, Democrats, Republicans, liberal, conservative,” the former vice president told CBS News‘ “60 Minutes” in October. He added that they’ll have 180 days to come up with recommendations on “how to reform the court system, because it’s getting out of whack, the way in which it’s being handled.”

“And it’s not about court-packing. There’s a number of other things that our constitutional scholars have debated, and I’ve looked to see what recommendations that commission might make,” he said.

Amid calls to pack the court following Trump’s push to appoint Barrett, the founder of the Article III Project organization, Mike Davis, told The Epoch Times that such a move would be tantamount to a “radical assault” on the judicial system.

“Court-packing is a radical assault on judicial independence,” Davis said, arguing also that other ideas floated by some Democrats, like ending the legislative filibuster—meaning lowering the vote threshold from 60 to 51 votes—and granting statehood to Washington D.C., Puerto Rico, and perhaps the Virgin Islands, could lead to a permanent shift in the balance of power in favor of liberals.