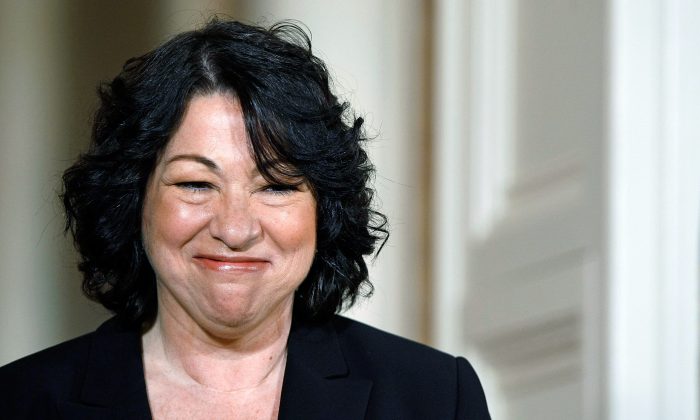 Judge Sonia Sotomayor as she is named by then-President Barack Obama to be nominated to the Supreme Court, in the White House in Washington on May 26, 2009. (Chip Somodevilla/Getty Images)
US News

A longstanding federal treaty with the Yakama Indians prevents Washington state from collecting taxes on gasoline sold by a Yakama-owned business, an attorney for the enterprise told members of the Supreme Court Oct. 30, in a case that could have larger implications for states’ abilities to collect taxes from tribal businesses nationwide.

During oral arguments, justices seemed skeptical of the contention that the state shouldn’t be allowed to collect the tax in question, and supportive of enforcing the provisions of the treaty to benefit the Indians covered by it.

If the Supreme Court fails to reverse the state court ruling that is being appealed, “a massive loophole in state tax regimes” would be created, “allowing Yakama businesses to avoid taxes nationwide simply by transporting goods over highways,” the state argued in a court brief. It would also give Yakama Indians “an unwarranted economic advantage over other tribes and non-tribal businesses.”

A failure to reverse could also adversely affect state revenues in any states with Indian lands and inspire further challenges to states’ authority to collect taxes.

The case concerns Cougar Den Inc. in Washington state, which imports gasoline into the Yakama reservation for sale at Yakama gas stations from nearby Oregon. The gas travels over 27 miles of Washington state highway that overlaps with traditional Indian trading routes.

In March 2013, Cougar Den—owned by Kip Ramsey III, a recognized member of the Yakama Indian Nation—began shipping motor vehicle fuel from Oregon to the reservation and selling the fuel at tribal gas stations. Cougar Den paid applicable federal and tribal taxes on the fuel sold, but did not pay taxes to Washington state.

The state sued the business in December 2013 for failing to pay $3.6 million in excise taxes on the fuel. Cougar Den challenged the tax, arguing that because it was owned by a member of the Yakama tribe, the business was exempt from certain taxes under the right to travel guaranteed in an 1855 treaty entered into with the United States. While the treaty doesn’t reference taxes, fuel, or off-reservation trading rights, it does provide tribal members with “the right, in common with citizens of the United States, to travel upon all public highways,” court documents state.

An administrative law judge sided with the company, accepting its treaty-based arguments. A state official reversed the judge’s ruling. The case then moved to county court, which overturned the official. The state appealed that decision to the Washington Supreme Court, citing a 1973 U.S. Supreme Court decision, Mescalero Apache Tribe v. Jones, which held that “outside Indian country, Indians are subject to generally applicable state taxes ‘[a]bsent express federal law to the contrary,’” and that exemptions to state taxes “are not granted by implication” and there must be “a definitely expressed exemption[.]”

The state lost. The state supreme court found for Cougar Den, citing the treaty. Such treaties must be interpreted with ambiguities being resolved in Indians’ favor, the court found. Yakama Indians’ right to travel outside the reservation and trade their goods without conditions or restrictions being imposed on them by the state had to be respected, the court held.

Answering a question from Justice Brett Kavanaugh, Cougar Den lawyer Adam G. Unikowsky said the terms of the treaty must be upheld.

The Yakama gave up huge swaths of land in exchange for “the right to travel” across it, he said.

“It is a little bit of a bait and switch to the Yakamas to say, well, now we’re going to basically exploit the fact that you have to travel across this stretch of land to impose this tax that we wouldn’t otherwise be able to impose, and, by the way, the effect of the tax is to mimic a tax on the reservation—on on-reservation retailers.”

Unikowsky said that, in his view, “it’s very natural and consistent with what I think the expectation of the Yakamas would have been, that they could continue traveling across that land with their goods as they were already doing it at the time—and that means—that means transporting without paying a fee or owing an obligation to the states.”

That the Yakama people gave up a lot in exchange for the protections of the 1855 treaty was a continuing theme during oral arguments.

“To state the obvious, the value, current value of the land the tribe gave up is enormous, right?” Kavanaugh asked.

“It’s a third of the State of Washington, I believe, Your Honor,” the attorney replied.

While questioning Assistant to the U.S. Solicitor General Ann O’Connell, Justice Sonia Sotomayor said, “The one difference that you can’t get around is they didn’t sign a treaty and give away that much real estate to get nothing in return, to be treated exactly like every other citizen in traveling the highway.”