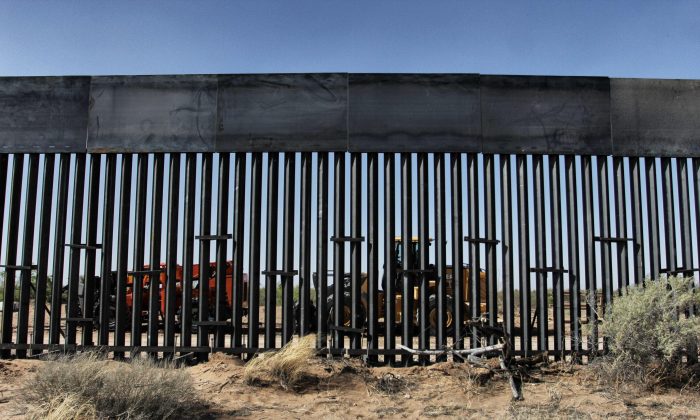 A section of the border wall under construction on the border between Ciudad Juarez, Chihuahua state, Mexico and Santa Teresa, New Mexico state, United States, on April 17, 2018. (HERIKA MARTINEZ/AFP/Getty Images)
US News

The Supreme Court summarily rejected a legal challenge from activists who claimed that President Donald Trump’s proposed southern border wall ran afoul of environmental laws, clearing away a potential obstacle that might have prevented the administration from moving ahead with construction on the project.

The Dec. 3 denial of the activists’ petition for certiorari was environmentalists’ second loss at the Supreme Court in as many weeks. The new ruling came days after the court unanimously rebuffed environmental regulators and activists in a case involving the endangered dusky gopher frog; in that case, the court found that the federal government overreached by limiting the development of private land in Louisiana to help save an amphibian that doesn’t actually live there.

The ruling is also a significant victory for Trump, who campaigned on beefing up immigration law enforcement and constructing a wall on the nation’s multi-state border with Mexico. Years ago, Congress approved legislation authorizing construction of the wall but has yet to actually appropriate funding for it. Congress has appropriated limited funding for fencing and other barriers along the border.

“Could somebody please explain to the Democrats (we need their votes) that our Country losses [sic] 250 Billion Dollars a year on illegal immigration, not including the terrible drug flow. Top Border Security, including a Wall, is $25 Billion. Pays for itself in two months. Get it done!”

The court decision comes at a time when the nation’s immigration system and porous borders are constantly in the headlines. Televised images of members of Central American caravans defiantly scaling border fencing to unlawfully enter the country have enraged many Americans. Trump has deployed about 6,000 U.S. troops to the border with Mexico.

The decision to not consider an appeal of the ruling by U.S. District Judge Gonzalo Curiel of the Southern District of California earlier this year by the Center for Biological Diversity, Animal Legal Defense Fund, and Defenders of Wildlife helps to clear the way for the administration to move forward with building a border wall, assuming Congress appropriates funding for the project. Curiel, coincidentally, is the same judge Trump previously criticized for his handling of a class-action lawsuit involving the now-defunct Trump University.

But it’s far from certain that lawmakers will approve funding for the wall. Trump has threatened to shut down the federal government if Congress fails to ante up $5 billion for the initial phase of wall construction, for a project expected to cost $25 billion.

“We’ve worked that out. And this fight’s going to continue on. And clearly, what we’re battling over is to make sure that we can fund our border-security properly, build the wall, and give President Trump the money he needs to keep America safe.”

The Supreme Court justices declined without comment the request to review the ruling by Curiel, who dismissed the activists’ claim that the Trump administration had gone forward with preliminary phases of the project without complying with environmental laws.

Activists alleged in court filings that building the wall would have an adverse impact on the snowy plover and California gnatcatcher birds, and on other species, including the fairy shrimp, Quino checkerspot butterfly, and plant life such as the Tecate cypress and Otay Mesa mint.

Brian Segee, a lawyer for the Center for Biological Diversity, told Reuters he was disappointed the court turned down his group’s appeal of Curiel’s decision.

“Trump has abused his power to wreak havoc along the border to score political points,” Segee said. “He’s illegally sweeping aside bedrock environmental and public-health laws. We’ll continue to fight Trump’s dangerous wall in the courts and in Congress.”