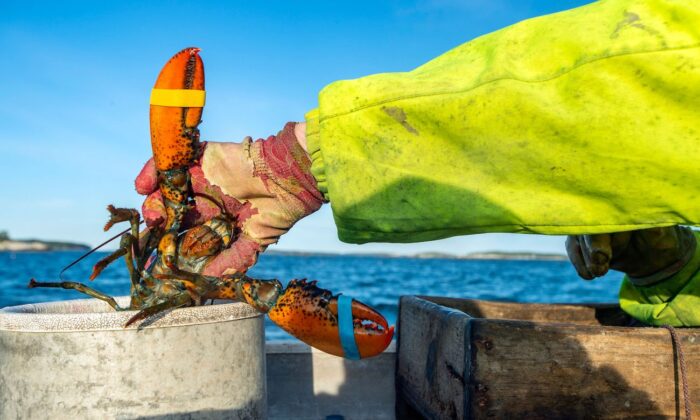 The U.S. Supreme Court has ruled against lobster fishing entities who wanted the court to block new fishing restrictions in the Gulf of Maine designed to protect endangered whales.

Justice Stephen Breyer, who oversees emergency applications over issues before the 1st Circuit, on Dec. 3 rejected without comment the appeal by the Maine Lobstering Union and two lobster fishing companies.

The new restriction bans the use of lobster traps—vertical buoy ropes—each winter from October to January in federal waters of the Gulf of Maine covering an area of about 950 square miles.

NOAA Fisheries, the federal agency overseeing national marine resources, announced the ban on Aug. 31 in efforts to protect North Atlantic right whales—one of the planet’s most endangered species—because they’re at risk of dying from being entangled in the ropes.

The estimated number of whales stood at 366 in 2019, and was thought to have dropped to 336 in 2020, a group of scientists said in October. Lethal entanglements in fishing gear and ship strikes are the two biggest threats to the whale species’s survival, according to the World Wide Fund for Nature.

Another concern is that proposed offshore wind projects could increase disruption to right whales and their habitat off the East Coast—particularly in southern New England waters, where they have been sighted in increasing numbers over the past decade, according to NOAA.

In the emergency application (pdf) docketed on Nov. 30, attorneys for the lobster fishermen argued that the ban unfairly burdens the industry.

The restriction would reduce fishing by “123 of Maine’s largest and most productive fishing vessels,” many of which come from the state’s top two lobster ports, and many of which only fish in the area between October and January of each year, they said in the emergency application.

“Maine fishermen have taken great pains to implement mitigation measures at enormous expense to conserve and protect right whales that are not present in the waters where they fish, only to see their efforts ignored by federal agencies that impose additional regulations without analyzing the effectiveness of existing ones,” attorneys stated.

The Maine Lobstering Union, which is made up of about 200 fishermen, had been engaged in a legal battle against NOAA Fisheries over the matter. The union had filed the emergency appeal after the 1st U.S. Circuit Court of Appeals ruled on Nov. 16 that the restrictions on lobster fishing were legal.

On Oct. 16, the U.S. District Court for the District of Maine granted emergency relief to the lobster union to stop NOAA Fisheries from enforcing its ban. U.S. District Judge Lance Walker said in his ruling at the time that regulators had relied on “markedly thin” statistical modeling instead of hard evidence to show the region off-limits to vertical buoy ropes was really a hot spot for the North Atlantic right whales, the Portland Press-Herald reported.

NOAA Fisheries, in response, brought the case to the 1st U.S. Circuit Court of Appeals, which ruled on Nov. 16 to lift the lower court’s injunction. In its ruling, the appeals court said the federal government has a “congressionally assigned task of assuring the right whales are protected from a critical risk of death.”

NOAA Fisheries spokesperson Lauren Gaches said in a statement at the time that fishermen must start to remove their gear, and aren’t allowed to set or reset gear in the area.

“North Atlantic right whales are in crisis and approaching extinction with fewer than 400 remaining, due primarily to the serious injuries and deaths they have suffered from entanglements and vessel strikes,” Gaches said.

Environmental groups cheered the court’s ruling at the time. The court’s decision affirms that “reducing entanglements by prohibiting fishing in this area is critical to ensuring the survival of right whales,” said Erica Fuller, a senior attorney at the Conservation Law Foundation.