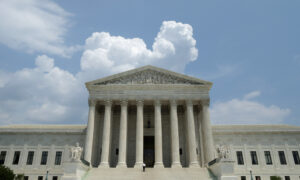 The U.S. Supreme Court on Monday dismissed a challenge filed by an Arizona resident who had sought to prove claims of election fraud during the Nov. 3 election in her state.

The nine justices, without comment, dismissed (pdf) a request by Pinal County resident Staci Burk, who had sought access to ballots to prove that some were invalid or fraudulent.

Earlier this year, the Arizona Supreme Court issued a ruling that agreed with a trial court judge in Pinal County that Burk lacked the right to contest the election. The reason given was that she wasn’t a registered voter at the time she filed her lawsuit, as required in state election contests. Both courts also agreed that she made her legal challenge too late, after the five-day period for filing such an action had passed.

“There is nothing before the Court to indicate that Appellant timely contacted the appropriate authorities to correct any problems with her voter registration,” Arizona Supreme Court Chief Justice Robert Brutinel had written. “An election challenge … is not the proper vehicle to reinstate voter registration.”

In her petition to the Supreme Court, Burk wanted a hearing over the question about whether she was a qualified elector under state law, which would thereby allow her to bring claims of evidence of election fraud.

Burk, in an emailed comment, wrote: “It’s very disappointing that the Supreme Court refused to review my Fourteenth Amendment Equal Protection case. I alleged my right to equal protection was denied when my registration was illegally cancelled while nonexistent votes were counted.”

Burk added that the “lower Court did not hear the case on merit and dismissed it on technicalities which the lower Court admitted was due to their own Clerks mistake.”

She added: “I clearly had standing under Spokeo as I had direct and actual harm by being denied the right to vote. I found out just before the election that my registration was illegally cancelled, and was unable to re-register due to being hospitalized for several weeks with pneumonia. I could not register online because I am a ‘protected address’ voter, thus requiring several weeks processing time and a hard copy voter form. The Court dismissed the case without any type of evidentiary hearing to present those facts.”

Burk said that when lawyers argued that the Arizona Supreme Court should dismiss her case, she noted that the court noted that her case wasn’t “dismissed on merit” and alleged there was evidence of fraud that would be admissible in the court.

Meanwhile, an audit ordered by the Arizona state Senate of nearly 2.1 million Maricopa County, Arizona, ballots could last for weeks, according to former Arizona Secretary of State Ken Bennett, the Senate audit liaison.

Bennett said over the weekend that there is “no deadline” and added that the Senate has been granted permission to the state fairgrounds “for as long as we need it.”