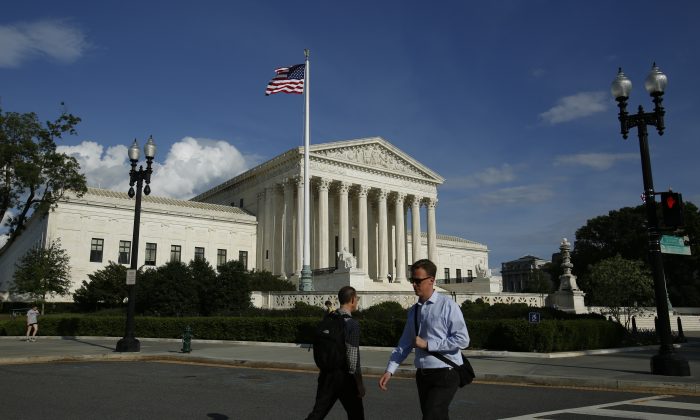 WASHINGTON—At the urging of California and 45 other states, the Supreme Court has overturned a 40-year-old precedent that allowed states to be sued in the courts of other states.

The 5–4 decision on May 13 pitted the court’s conservative and liberal wings against each other. The conservatives voted to overturn a landmark 1979 decision known as Nevada v. Hall because, in their view, the states’ “sovereign immunity is a historically rooted principle embedded in the text and structure of the Constitution.”

Although the legal doctrine justifying the following of precedent, stare decisis, which is Latin for “to stand by things decided,” remains important, it is “not an inexorable command” and is “at its weakest when we interpret the Constitution because our interpretation can be altered only by constitutional amendment,” the court ruled this week.

“States all too frequently find themselves the targets of private-plaintiff lawsuits filed in the courts of other States … [which] not only insult the sovereign dignity of defendant States, but also pose the real risk of exposing States to judgments unrestrained by any concern for local fiscal impact.”

This was the third time at the Supreme Court for inventor Gilbert P. Hyatt, who has been fighting the Franchise Tax Board of California for decades over personal income tax California claims he owes. When Hyatt’s case last came before the high court in 2016, some observers said the court seemed ready to resolve the issue, but Justice Antonin Scalia unexpectedly died and the court deadlocked in a 4–4 vote.

In 1992, Hyatt filed a California tax return, stating that he moved to Nevada in October 1991. The board disputed the state residence change and conducted an intrusive audit that found the Nevada move was a sham. Subsequent audits and millions of dollars in penalties and interest followed.

In 2008, a Nevada state jury awarded Hyatt $85 million in damages for emotional distress, $52 million for invasion of privacy, $1 million for fraud, and $250 million in punitive damages. The Nevada Supreme Court affirmed the verdict in part and reversed in part, substantially reducing the damages awarded and determining that the California board was immune from punitive damages. But California claimed it was treated unfairly in the Nevada courts and appealed.

The Constitution contains an implied right that states “could not be hauled involuntarily before each other’s courts,” Thomas wrote.

“Nevada v. Hall is contrary to our constitutional design and the understanding of sovereign immunity shared by the States that ratified the Constitution. Stare decisis does not compel continued adherence to this erroneous precedent. We, therefore, overrule Hall and hold that States retain their sovereign immunity from private suits brought in the courts of other States.”

When the nation was founded, “it was well settled that States were immune under both the common law and the law of nations,” Thomas continued.

“The participants in the ratification debates disagreed about whether the new constitution would or should subject states to suit in the new courts of the soon-to-be superior sovereign, but they were unanimous in their understanding that states could not be sued in the courts of other states.”

Liberal justices seemed alarmed that the conservative justices were willing to jettison precedent in this case.

Justice Stephen Breyer wrote a dissenting opinion. During oral arguments in the case, he said, “Every time we overrule a case, it’s like a little chink in an armor,” sharing his view that legal uncertainty makes it more difficult for attorneys to offer useful legal advice.

“‘It is one thing to overrule a case when it ‘def[ies] practical workability,’ when ‘related principles of law have so far developed as to have left the old rule no more than a remnant of abandoned doctrine,’ or when ‘facts have so changed, or come to be seen so differently, as to have robbed the old rule of significant application or justification,’” Breyer wrote in the minority opinion.

There was little evidence that Nevada v. Hall was unworkable, he wrote, adding there had been “only 14 cases in 40 years in which one State has entertained a private citizen’s suit against another State in its courts.”

“The majority has surrendered to the temptation to overrule Hall even though it is a well-reasoned decision that has caused no serious practical problems in the four decades since we decided it,” the justice wrote.

“Today’s decision can only cause one to wonder which cases the Court will overrule next.”