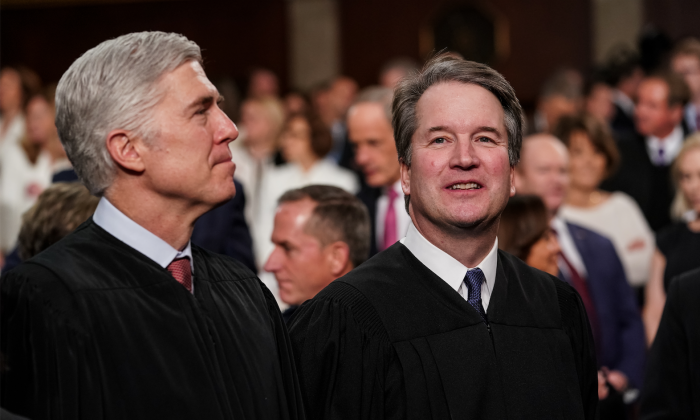 Supreme Court Justices Neil Gorsuch and Brett Kavanaugh attend the State of the Union address in the chamber of the U.S. House of Representatives at the U.S. Capitol Building in Washington on Feb. 5, 2019. (Doug Mills-Pool/Getty Images)
Judiciary

The Supreme Court ruled in favor of a criminal defendant, voting 7–2 to curb a federal law that mandates significantly enhanced penalties for crimes involving a firearm.

In the case at hand, Justin Eugene Taylor was involved in the marijuana trade in Richmond, Virginia. On Aug. 14, 2003, he offered to obtain the drug for a distributor but instead tried to rob the man. The victim resisted and Taylor’s accomplice fatally shot him. Federal prosecutors charged Taylor under 18 U.S.C. 924(c), which punishes anyone who “uses or carries a firearm” “during and in relation to any crime of violence,” or who possesses a firearm “in furtherance of any such crime,” according to court documents.

A “crime of violence” is defined as a crime that has “as an element the use, attempted use, or threatened use of physical force against the person or property of another.” A conviction carries a minimum five-year prison sentence.

Prosecutors predicated the 924(c) charge on Taylor’s commission of attempted Hobbs Act robbery. The Hobbs Act punishes robbery or extortion that has an effect on interstate commerce. Prosecutors cut a deal with Taylor. He agreed to plead guilty to the charge and to conspiracy to commit Hobbs Act robbery. Taylor acknowledged that the attempted robbery was a “crime of violence” under the residual clause of 924(c). The residual clause provides that “a crime of violence can also include any felony that, ‘by its nature,’ entails ‘a substantial risk’ of physical force.”

A federal district court accepted Taylor’s guilty plea to one count under 924(c) and one count under the Hobbs Act, sentencing him to 30 years, a decade more than he could have received for his Hobbs Act conviction alone. The U.S. Court of Appeals for the 4th Circuit rejected his appeal in 2011.

In 2015, the Supreme Court struck down part of the Armed Career Criminal Act (ACCA) as unconstitutionally vague in Johnson v. U.S. In 2016, the high court held in Welch v. U.S. that Johnson could be applied retroactively. Citing Johnson and Welch, Taylor petitioned the circuit court, arguing the residual clause in ACCA paralleled the residual clause in 924(c) and that the latter was therefore also unconstitutionally vague. He also argued that attempted Hobbs Act robbery did not constitute a “crime of violence” under 924(c)’s elements clause because it lacked “as an element the use, attempted use, or threatened use of physical force.”

The majority of Supreme Court justices in the case, U.S. v. Taylor, court file 20-1459, voted to affirm the circuit court and ruled that attempted Hobbs Act robbery isn’t necessarily a crime of violence and therefore Taylor shouldn’t have received the longer sentence.

“Simply put, no element of attempted Hobbs Act robbery requires proof that the defendant used, attempted to use, or threatened to use force,” Gorsuch wrote. Taylor may receive 20 years under the Hobbs Act, but “Congress has not authorized courts to convict and sentence him to a decade of further imprisonment under” the 924(c) law.

The ruling “exemplifies just how this Court’s ‘categorical approach’ has led the Federal Judiciary on a ‘journey Through the Looking Glass,’ during which we have found many ‘strange things,’” Thomas wrote, referencing Lewis Carroll’s classic fantasy novels, “Alice in Wonderland” and “Through the Looking-Glass.”

“Rather than continue this 30-year excursion into the absurd, I would hold Taylor accountable for what he actually did and uphold his conviction.”

“We are gratified to know that the Supreme Court ruled for our client and we hope that the decision will help not only him but also other people convicted of § 924(c) violations based on attempted Hobbs Act robbery,” she told The Epoch Times by email.

Danielle Blevins of the U.S. Department of Justice said by email, “We’re going to decline to comment on any decisions handed down yesterday.”