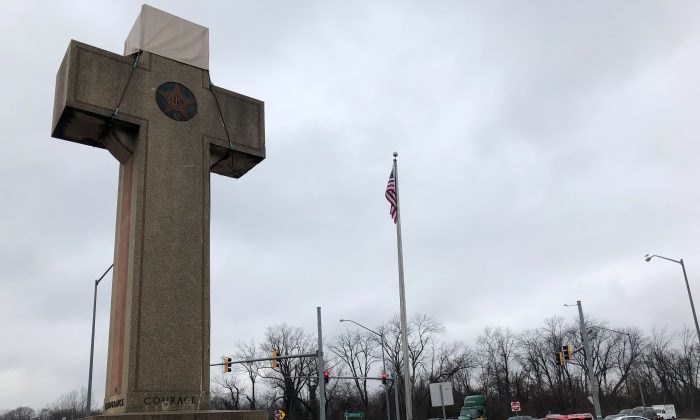 A concrete cross commemorating servicemen killed in World War One, which is the subject of a religious rights case now before the U.S. Supreme Court, is seen in Bladensburg, Maryland, on Feb. 11, 2019. (REUTERS/Lawrence Hurley)
US News

Supreme Court Considers Whether War Memorial Can Be a Cross

WASHINGTON—A war memorial that is a towering 40-foot-high Latin cross must be relocated from public land in suburban Washington because its prominence implies government endorsement of Christianity, an atheist group told the Supreme Court in oral arguments on Feb. 27.

The case pitted the American Humanist Association against the American Legion and the Maryland-National Capital Park and Planning Commission, which owns the small plot of land in the center of a busy three-way junction in Veterans Memorial Park in Bladensburg, Maryland.

The concrete and granite Peace Cross honors 49 local soldiers who died in World War I. The Legion helped pay for construction which was completed in 1925. The commission took over the memorial in 1961 and it was added to the National Register of Historic Places in 2015.

An atheist group sued in 2014, arguing the massive cross passed by thousands of commuters daily sends an unconstitutional message that government favors one religion over all others. At the original trial, they lost. The judge ruled the monument’s “primary effect” was religion-neutral and there was no excessive entanglement of government with religion.

But the Fourth Circuit Court of Appeals disagreed, finding that it violated the so-called entanglement prong of an Establishment Clause balancing test the Supreme Court invented in Lemon v. Kurtzman (1971). The cross is the “preeminent symbol of Christianity” and even in the context of a memorial, it “serves not simply as a generic symbol of death, but rather a Christian symbol of the death of Jesus Christ.”

“The display aggrandizes the Latin cross in a manner that says to any reasonable observer that the commission either places Christianity above other faiths, views being American and Christian as one in the same, or both.”

Neal Katyal, representing the park commission, told the justices no one had challenged the monument until now and that “it’s no ordinary cross.”

The cross doesn’t offend the Constitution, he said, explaining that at its center sits a large American Legion symbol. There is no religious text, he added, just four words: valor, endurance, courage, and devotion.

Justice Sonia Sotomayor suggested moving the cross or privatizing it to sever the governmental connection.

Katyal pushed back, saying that was “hypothetically possible” but that a move could destroy the now-fragile 94-year-old cross.

Give it back to the Legion, Sotomayor said. Katyal replied it is Maryland’s position that it cannot be given to a private entity “because of the traffic concerns.”

In the context of World War I, crosses have a secular meaning in that they honor those who perished in the conflict, Katyal said.

The “dominant image of the time, everything from that poem to art, to the war bond advertisements that the United States Government put, to the 1924 congressional resolution, all did use this cross.”

“That poem” refers to words written by Lt.-Col. John McCrae of the Canadian Expeditionary Force in 1915 after he buried a friend who was killed in combat in Belgium. It begins, “In Flanders fields the poppies blow, between the crosses, row on row …”

“I’m not aware of any case or reason to say that a large Latin cross can be stripped of its religious meaning … Its meaning as a war memorial is distinctly for Christians.”

Justice Neil Gorsuch asked Miller if the Ten Commandments, which he noted are depicted in a frieze in the courtroom, were “too loud.”

“This is the only area I can think of … where we allow people to sue over an offense because, for them, it is too loud.”

“Why shouldn’t we apply our normal standing rules and require more than mere offense to make a federal case out of these?”

Miller replied that it was more than a case of “mere offense.”

“We’re talking about the government being the speaker and essentially giving you the message as the non-Christian in your community that you are a lesser citizen.”

Justice Stephen Breyer suggested the religious makeup of the population has changed since 1925. Putting up a Christian cross nowadays would present problems, though that didn’t necessarily mean existing crosses needed to be removed, he said.

What if the court were to say, “Yes. Okay. No more … We’re a different country now”?

The cross is not “just some sort of passive display that people don’t take note of,” Miller said, and is more “like a billboard,” ingraining “in your mind … [an] association between … being Christian and having valor, having courage.”

Gorsuch seemed to speak for many lawyers when he lamented the court’s confusing past rulings on religious symbols and actions, calling them a “dog’s breakfast.”