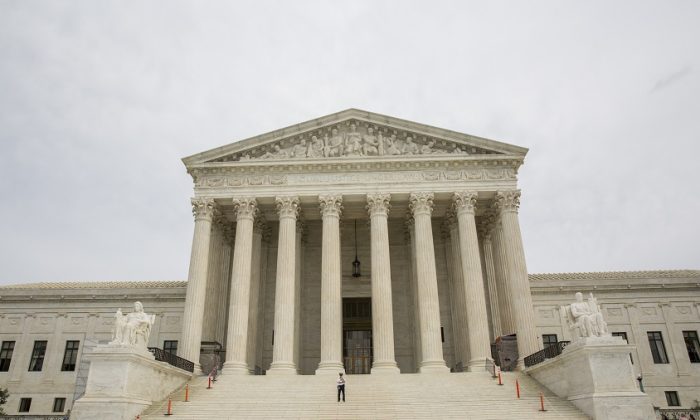 The Supreme Court of the United States in Washington on Sept. 22, 2017. (Samira Bouaou/The Epoch Times)
US News

Convicted cop-killer Vernon Madison shouldn’t be executed because he can’t remember committing the 1985 murder that landed him on death row, his attorney told the Supreme Court Oct. 2.

The high court has been asked to consider whether the Eighth Amendment’s ban on cruel and unusual punishment allows the execution of a prisoner whose mental disability leaves him without any recollection of committing the offense that led to the sentence of death.

In this case, Madison suffers from vascular dementia and has experienced several strokes that have led to severe cognitive dysfunction and a degenerative medical condition. His lawyer says Madison is blind, as well as incapable of walking or speaking.

At issue is whether a murderer can escape punishment merely because his body has been ravaged by time and common age-related diseases. Not executing Madison would be unfair to the victim and his family, the government argued. That would also provide incentives to other death-row inmates to drag out the appeals process, as Madison did for years, in the hope that they, too, can hope to live long lives, continuing long after their victims’ bodies have turned to dust.

Madison had broken up with his girlfriend. At the request of neighbors, Schulte was guarding the woman and her 11-year-old daughter while Madison removed his belongings from their house. Madison pretended to leave, and armed with a pistol, hid behind the police car where Schulte was sitting. He put two bullets in Schulte’s head, killing him. He also shot his ex-girlfriend in the back as she attempted to flee. She survived.

It wasn’t a close case. Three eyewitnesses watched Madison murder Schulte and try to murder his ex-girlfriend. Madison was convicted of capital murder and sentenced to death. The state appeals court reversed, finding that prosecutors unfairly excluded blacks from the jury.

At a second trial, Madison was again convicted and capital punishment was ordered. The appellate court reversed this conviction because prosecutors presented inadmissible evidence.

A third trial ended in Madison’s conviction and the imposition of the death penalty; this time, the appeals court refused to reverse.

Madison kept his lawyers busy filing a series of collateral challenges at the state and federal level. All failed. In 2015, the Supreme Court refused to intervene.

Then, beginning in May 2015, he experienced a series of debilitating strokes in prison that caused significant brain damage leading to long-term memory loss. Madison now has encephalomalacia, which means tissue is dead in sections of his brain.

“He also suffers from vascular dementia, cognitive defects, severe memory loss, and other chronic conditions that have decreased his capacity to rationally understand his circumstances,” according to a case summary provided by the Supreme Court’s press office.

Madison’s medical condition convinced the Supreme Court to put his execution on hold. On Feb. 26, the court agreed to review his case.

The Supreme Court has ruled previously on similar death-row cases.

In Ford v. Wainwright (1986), the court determined that the Eighth Amendment forbids the execution of an inmate who is mentally incompetent. In Panetti v. Quarterman (2007) the court found that the lower courts should have considered a condemned man’s claim that he suffered from “a severe, documented mental illness that is the source of gross delusions preventing him from comprehending the meaning and purpose of” his death sentence.

“What the court has said is that our norms, our values are implicated when we do things to really fragile, really vulnerable people,” Madison’s attorney, Bryan A. Stevenson, told the eight justices.

Stevenson said he wasn’t arguing that there should be “a categorical ban on executing people with a certain kind of condition.” Instead, he noted the court has ruled, in the Ford and Panetti cases, that “it is unconstitutional to execute people who are incompetent.”

“And that power has to be utilized fairly, reliably, and humanely,” the lawyer said.

“This court’s jurisprudence in Ford and Panetti speaks to the humane part. And what this court said is that if someone is disabled and incompetent and fragile and bewildered and confused, in the way that we have seen, in the context of insanity, in the context of other kinds of mental illness, it is simply not humane to execute them.”

Dementia “in this case,” Stevenson said, “renders Mr. Madison frail, bewildered, vulnerable in a way that cannot be reconciled with executing him because of his incompetency.”

Alabama Deputy Attorney General Thomas R. Govan Jr. told the court that Madison’s health problems have no bearing on the “constitutionality” or “propriety” of the State of Alabama’s pursuit of the death penalty in this murder case.

“Nothing about Mr. Madison’s conditions impact the state’s interest in seeking retribution for a heinous crime.”