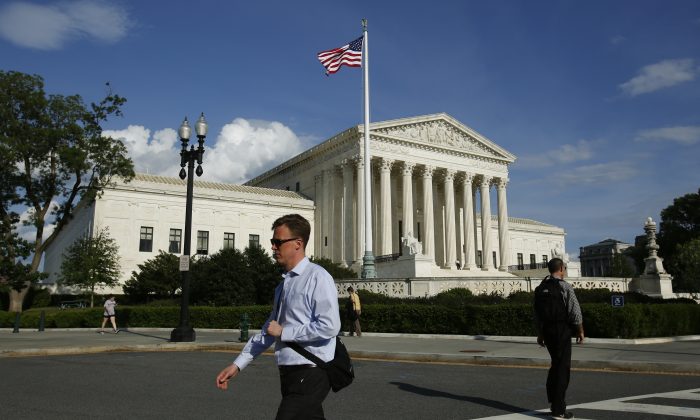 Supreme Court Considers When Pension Participants Can Sue Their Plans

WASHINGTON—The Supreme Court has agreed to look at a lawsuit brought by pension plan participants who claim U.S. Bank lost more than $1 billion of their money by gambling on risky investments.

This is the third case the high court has agreed to hear in recent weeks that touches upon federal laws that regulate how pension plans are operated. The cases are expected to be heard by the court in its new term that begins in October.

In this case, the Trump administration sided with the plan participants and had urged the court to take up the case, which is known as Thole v. U.S. Bank. The court granted the petition for review on June 28, the final day of its regular term.

Petitioners James Thole and Sherry Smith claim the bank violated its fiduciary duties when it plowed all of the plan’s assets into high-risk equity investments, which led to huge losses that the bank should be forced to repay.

The 8th Circuit Court of Appeals found for the bank, holding that the pension plan had bounced back and returned to financial soundness. This meant the plan participants didn’t actually lose money and therefore lack standing to bring the matter to court.

The Trump administration didn’t buy into that line of reasoning. The government maintains that any breach of a fiduciary duty is reason enough to allow plan participants to ask the courts for an injunction.

“In the government’s view, a fiduciary’s breach of duty is an injury giving rise to standing, regardless of whether it causes a pension plan to lose money,” according to a summary prepared by Bloomberg News. “The government has long advanced this position, with the Labor Department making similar arguments in cases against Bank of America, Aegon USA, and Convergex Group LLC.”

Thole v. U.S. Bank is the third case involving the Employee Retirement Income Security Act (ERISA), a very involved, detailed statute that establishes standards used by the lion’s share of retirement and health care plans, that the Supreme Court has agreed to hear in its new term in the fall.

In the Intel case, pension managers are appealing a decision by the often-reversed 9th Circuit Court of Appeals, which revived a lawsuit that accused them of violating federal law by making bad employee retirement plan investments that ended up costing beneficiaries hundreds of millions of dollars. The specific legal issue, according to court documents, is a legal deadline.

The case concerns whether the three-year limitations period in the ERISA law, which begins to run on “the earliest date on which the plaintiff had actual knowledge of the breach or violation,” bars a lawsuit when “all of the relevant information was disclosed to the plaintiff by the defendants more than three years before the plaintiff filed the complaint, but the plaintiff chose not to read or could not recall having read the information.”

In the IBM case, the Supreme Court decided to consider whether managers of a retirement fund for IBM employees who invested in IBM stock can be sued for not disclosing that the company’s microelectronics business was overvalued.

The case is an appeal from a December 2018 decision by the New York-based 2nd Circuit Court of Appeals.

Some business advocates view this case as an opportunity for the Supreme Court to curb perceived lawsuit abuses by the plaintiffs’ bar, while investors say they deserve to be treated fairly by plan administrators.