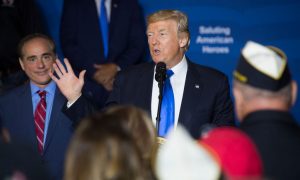 The Supreme Court of the United States in Washington, on Sept. 22, 2017. (Samira Bouaou/The Epoch Times)
US News

The Supreme Court has allowed the Trump administration to enforce its policy to restrict transgender people from serving in the military nationwide, while several lower court challenges continue.

The court granted the Justice department’s request on Jan. 22, to reverse the orders (pdf) made in the lower courts to block the Pentagon from proceeding with the ban. The justices split 5-4 based on ideological lines with the court’s five conservatives, including Justice Brett Kavanaugh, greenlighting Trump’s plan while its four liberal members—Justices Ruth Bader Ginsburg, Stephen Breyer, Sonia Sotomayor, and Elena Kagan—objected to allowing the ban to go ahead.

Although the court has allowed the ban to take effect, it rejected the department’s request  to hear oral arguments for now, which means the cases will continue to move through the appeal and lower courts. The high court’s ruling does not decide on whether the policy is legal or if President Donald Trump has the authority to issue the ban.

But after President Trump took office, the administration delayed the enlistment date, saying the issue needed further study. While that study was ongoing, the president tweeted in late July 2017, that the government would not allow “Transgender individuals to serve in any capacity in the U.S. Military.”

“Our military must be focused on decisive and overwhelming victory and cannot be burdened with the tremendous medical costs and disruption that transgender in the military would entail,” President Trump tweeted on July 26, 2017.

After consultation with my Generals and military experts, please be advised that the United States Government will not accept or allow……

….Transgender individuals to serve in any capacity in the U.S. Military. Our military must be focused on decisive and overwhelming…..

….victory and cannot be burdened with the tremendous medical costs and disruption that transgender in the military would entail. Thank you

In March 2018, the Trump administration announced that after studying the issue it was revising its policy made in August 2017. The new policy generally bars transgender individuals from serving unless they serve “in their biological sex” and do not seek to undergo a gender transition.

“Secretary of Defense state that transgender persons with a history or diagnosis of gender dysphoria—individuals who the policies state may require substantial medical treatment, including medications and surgery—are disqualified from military service except under certain limited circumstances,” according to a memorandum signed by the president in March last year.

The policy has an exception for transgender troops who relied on the Obama-era rules to begin the process of changing their gender, allowing them to continue to serve. The military said last year that over 900 men and women have done so.

Following Obama’s 2016 announcement to lift the ban on transgender service members, all soldiers received mandatory training on the issue as part of the policy’s implementation.

In the training, female soldiers were informed that males who identified as women would start using the female barracks, bathroom and shower facilities, warning them that the “Soldier still has male genitalia.”

A number of concerns were raised regarding the practicality of Obama’s policy. This was because the new policy would have allowed men to serve in the military while meeting the physical criteria for women, not for men.

The minimum requirements for the Army Basic training for a male soldier aged between 17 and 21, is 35 push-ups. For a female soldier, it is 13 push-ups.

“It was nothing but ‘social engineering and political correctness’—not any new medical research—that led the Obama administration to reverse this policy,” according to Tony Perkins, a veteran of the U.S. Marine Corps and president of the Family Research Council, in a statement on the organization’s website.

Epoch Times Reporter Jasper Fakkert and The Associated Press contributed to this report.