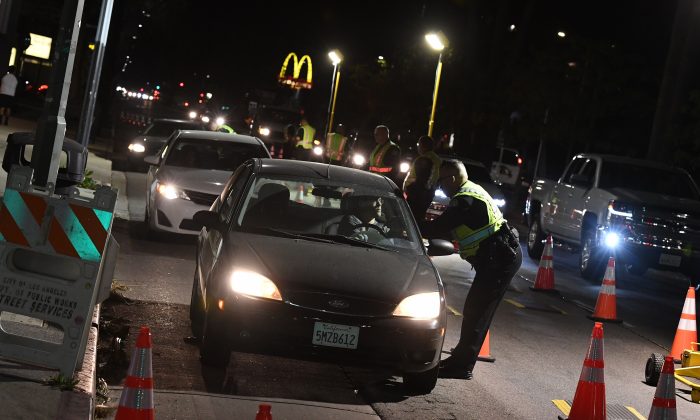 A driver is questioned at a Los Angeles police DUI checkpoint on April 13, 2018. (MARK RALSTON/AFP/Getty Images)
US News

The 5–4 decision didn’t split along the usual conservative versus liberal lines.

In May 2013, accused drunk driver Gerald P. Mitchell was depressed and took around 40 pills with vodka and Mountain Dew before driving. Police found Mitchell walking near his van and administered a breathalyzer test that found his blood alcohol content (BAC) was 0.24 percent, or triple the state’s legal limit for driving.

Mitchell was confined and taken to a hospital, but by then, he was unconscious. Police made hospital personnel draw his blood while he remained unconscious. His BAC at 90 minutes after being arrested was 0.222 percent, so he was charged with operating a vehicle while intoxicated.

Mitchell said the blood-draw evidence was inadmissible because the police violated his Fourth Amendment rights. The state argued under its implied-consent law, Mitchell had effectively consented to the draw by driving on Wisconsin’s roads.

The statute states that a “person who is unconscious or otherwise not capable of withdrawing consent is presumed not to have withdrawn consent.” In an appeal, a divided state Supreme Court upheld the conviction.

Although the Fourth Amendment generally mandates a warrant be obtained for a search, in “exigent circumstances,” searches may be conducted absent a warrant to “prevent the imminent destruction of evidence,” Alito wrote.

This exception usually allows police to draw blood from a passed-out drunk driving suspect without obtaining a warrant, he wrote. Blood alcohol limits “are needed for enforcing laws that save lives.”

Tests need to be carried out with haste, he wrote, because alcohol dissipates in the bloodstream. “Evidence is literally disappearing by the minute.” If the person cannot do a breath test, the only option remaining is a blood test.

It would be “perverse” if it were more difficult to carry out the blood test when someone is unconscious, and presumably even more intoxicated, he wrote.

And the fact that the driver is unconscious imposes a heavier burden on police officers, who may have to transport the driver to the hospital “not just for the blood test itself but for urgent medical care.”

This takes officers’ attention away from other pressing concerns and creates a “dilemma” for police.

“It would force them to choose between prioritizing a warrant application, to the detriment of critical health and safety needs, and delaying the warrant application, and thus the [blood alcohol test],” he wrote. And even though technology has made it easier to obtain a warrant “faster and more easily,” “the time required has shrunk, but it has not disappeared.”

In her dissent, Justice Sotomayor said the Alito opinion rested on a “false premise.”

Although “drunk driving poses significant dangers that Wisconsin and other States must be able to curb,” she said that under the Fourth Amendment, “the answer is clear: If there is time, get a warrant.”