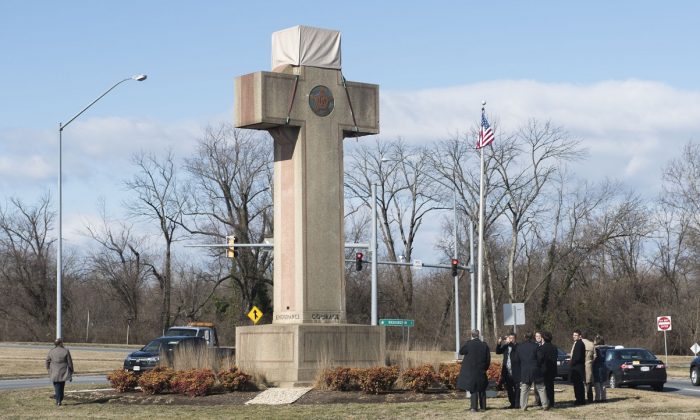 WASHINGTON—The Supreme Court rejected arguments that a large Latin cross must be relocated from public land in a Maryland suburb of Washington because its prominence supposedly implies government endorsement of Christianity.

The ruling about the Bladensburg Peace Cross in American Legion v. American Humanist Association was handed down June 20. By a vote of 7 to 2, justices held that Maryland isn’t violating the Establishment Clause of the First Amendment by allowing the cross on public land and spending taxpayer dollars for its upkeep. The Trump administration backed the American Legion in the litigation.

“For nearly a century, the Bladensburg Cross has expressed the community’s grief at the loss of the young men who perished, its thanks for their sacrifice, and its dedication to the ideals for which they fought,” Justice Samuel Alito wrote in the majority opinion.

“It has become a prominent community landmark, and its removal or radical alteration at this date would be seen by many not as a neutral act but as the manifestation of ‘a hostility toward religion that has no place in our Establishment Clause traditions.’”

There should be a “strong presumption of constitutionality” in favor of “retaining established, religiously expressive monuments, symbols, and practices,” he wrote. It may be “especially difficult” to ascertain the “original purpose or purposes” of practices, symbols, or monuments that “were first established long ago.”

“This was not just about a single cross,” Reistad said in a press release. “This was about the right of a community to honor its fallen heroes.”

The American Legion was founded in 1919 and reports having two million members.

The American Humanist Association tried unsuccessfully to prove that the concrete and granite cross that honors 49 local soldiers who died in World War I was purely sectarian. The American Legion helped pay for construction, which was completed in 1925. The Maryland-National Capital Park and Planning Commission, which owns the small traffic circle in the center of a busy three-way junction in Veterans Memorial Park in Bladensburg, Maryland, took over the memorial in 1961, and it was added to the National Register of Historic Places in 2015.

Previously, the 4th Circuit Court of Appeals sided with the Humanist Association, finding the cross is the “preeminent symbol of Christianity” and even in the context of a memorial, it “serves not simply as a generic symbol of death, but rather a Christian symbol of the death of Jesus Christ.”

An exchange between Monica J. Miller, counsel for the American Humanist Association, and justices during oral arguments Feb. 27 summed up the case for removing the cross.

“I’m not aware of any case or reason to say that a large Latin cross can be stripped of its religious meaning. … Its meaning as a war memorial is distinctly for Christians,” Miller said.

Justice Neil Gorsuch asked Miller if the Ten Commandments, which he pointed out are depicted in a frieze in the courtroom, were “too loud.”

“This is the only area I can think of … where we allow people to sue over an offense because, for them, it is too loud,” Gorsuch said. “Why shouldn’t we apply our normal standing rules and require more than mere offense to make a federal case out of these?”

Miller answered it was more than a case of “mere offense.”

“We’re talking about the government being the speaker and essentially giving you the message as the non-Christian in your community that you are a lesser citizen,” he said.

In response to a question from Justice Stephen Breyer, Miller added that the cross isn’t “just some sort of passive display that people don’t take note of.” It is more “like a billboard,” ingraining “in your mind … [an] association between … being Christian and having valor, having courage.”

In the new opinion, Justice Alito acknowledged that the cross “came into widespread use as a symbol of Christianity by the fourth century,” but today, “there are many contexts in which the symbol has also taken on a secular meaning.”

The use of the cross in registered trademarks such as those belonging to Blue Cross Blue Shield, the Bayer Group, and some Johnson & Johnson products today is “indisputably secular,” he added.

The U.S. military stopped using rectangular slabs to mark graves during World War I, replacing them with crosses, Alito wrote. “[W]hen Americans saw photographs of these cemeteries, what struck them were rows and rows of plain white crosses. As a result, the image of a simple white cross “developed into a ‘central symbol’” of the conflict and lost any exclusively religious associations it had.

In a dissenting opinion, Justice Ruth Bader Ginsburg, joined by Justice Sonia Sotomayor, sided with the Humanist Association’s position on the cross.

Today, the court “erodes” its commitment to religious neutrality, “diminishing precedent designed to preserve individual liberty and civic harmony in favor of a ‘presumption of constitutionality for longstanding monuments, symbols, and practices,’” Ginsburg wrote.

The presence of the Peace Cross on a public highway “elevates Christianity over other faiths, and religion over nonreligion.”

The left-wing group People for the American Way blasted the ruling. PFAW Senior Fellow Elliot Mincberg said Ginsburg was justified in commenting that the decision “erodes” government neutrality toward religion.