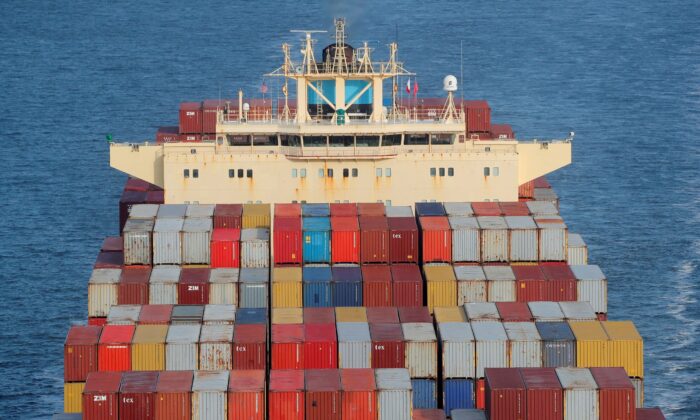 Containers are stacked on the deck of the cargo ship as it is underway in New York Harbor in New York City, on Nov. 7, 2021. (Brendan McDermid/Reuters)
Judiciary

The Supreme Court agreed on June 21 to hear New York’s lawsuit seeking to prevent New Jersey from unilaterally withdrawing from the interstate compact that created the Waterfront Commission of New York Harbor to combat corruption.

The storied Port of New York and New Jersey’s reckoning with organized crime was immortalized in director Elia Kazan’s 1954 film, “On the Waterfront,” a winner of eight Academy Awards that starred Marlon Brando.

But organized crime was driven out years ago and critics have long accused the commission of over-regulating businesses involved in the port and causing labor shortages.

New Jersey also claims it no longer benefits from the existence of the commission because when the compact was created in 1953 most of the economic activity in the port was on the New York side, but nowadays more than 90 percent of the activity is on the New Jersey side.

The state also argues it should be able to police its own ports.

New York Attorney General Letitia James, a Democrat, previously said that allowing New Jersey to leave the compact would cause “immediate and irreparable harm to New York” and result in more crime, higher prices on goods, and racial inequities in port hiring.

The decision to proceed with the case came after the Supreme Court decided on Nov. 22, 2021, in Waterfront Commission of New York Harbor v. Murphy (court file 20-772) to leave in place a ruling by the U.S. Court of Appeals for the 3rd Circuit that allowed New Jersey to pull out of the commission, as The Epoch Times previously reported.

Phil Murphy, the Democratic governor of New Jersey, was the respondent in the action.

New York decided to take the dispute to the Supreme Court, invoking its original jurisdiction.

Because individual states lack jurisdiction over each other, state courts cannot hear cases dealing with another state, so the U.S. Constitution allows the Supreme Court to hear disputes between states.

But instead of filing a petition for certiorari asking the high court to take up the case, states have to file a motion for leave, or permission, to file a bill of complaint.

New York filed its motion (pdf) on March 14 in New York v. New Jersey (court file 22O156). The justices did not explain in their unsigned order why they agreed to hear the case, as is their usual practice when deciding whether to hear cases.

The case goes back to 2018 when New Jersey resolved to get out of the compact.

Then-New Jersey Gov. Chris Christie, a Republican, signed legislation known as Chapter 324 withdrawing the state from the compact. Christie was succeeded in the post by Murphy.

A federal district court ruled for the commission, but the 3rd Circuit reversed it finding New Jersey’s sovereign immunity precluded the commission’s lawsuit.

The Supreme Court then decided not to get involved in the case at that time.

But in the case at hand, the court decided March 24 to enjoin New Jersey from enforcing Chapter 324.

In its March 14 filing with the high court, New York argued that New Jersey “lacks the power to withdraw unilaterally from the compact or abolish the commission without New York’s consent.”

The compact is a binding contract “and its terms provide that it may be amended only by concurring legislation enacted by both states … and that the Compact Act may be repealed only by Congress.”

Morgan Rubin, a spokeswoman for James, told Gothamist after the Supreme Court acted that her office was “pleased that the U.S. Supreme Court will hear this case, and we look forward to presenting our arguments to the court in the coming months.”

Bailey Lawrence, a spokesman for Murphy, told NorthJersey.com that he was upbeat about the state’s chances in the case.

Murphy “remains confident that when the case is fully considered and decided, New Jersey’s right to withdraw from the commission will be vindicated, and New Jersey will be able to reclaim authority over its ports with a regulatory structure more suited for the 21st century,” Lawrence said.

The Supreme Court gave New Jersey until Aug. 22 to file an answer to New York’s bill of complaint, and New York until Oct. 21 to file its opposition brief. New Jersey then has until Nov. 7 to file a reply brief and New York’s reply to that brief is due Nov. 22.

After the last brief is filed, the Supreme Court would presumably decide how to proceed. It could then decide to schedule oral argument in the case.