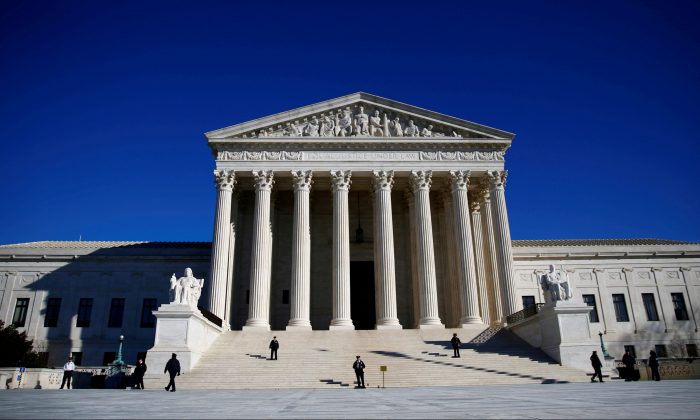 The Supreme Court has decided to review a New York case that could conceivably give Americans an opportunity to shape online content, as well as put a foot in the door to mount court challenges against censorship-prone social-media companies on grounds of free speech.

The case comes as activist complaints of harassment and viewpoint-based discrimination against companies such as Twitter, Facebook, and Google continue to grow. Conservatives, in particular, say that the social-media giants have been especially resolute in their determination to crack down on their political expression after Democrat Hillary Clinton, whom they strongly favored, was unexpectedly defeated by Republican Donald Trump in the 2016 presidential election.

Facebook and Twitter have seized upon claims of Russian meddling in the U.S. electoral process to justify curtailing free expression and have reportedly purged and undermined the pages and accounts of those who support the president.

The case itself doesn’t arise from the world of social media. Two content producers, DeeDee Halleck and poet Jesus Melendez, say that the public-access TV network Manhattan Neighborhood Network (MNN) suspended them for criticizing the network.

According to MNN, Melendez and Halleck featured themselves in a video that included “harassing and threatening language directed toward MNN staff during a long diatribe.” The video titled “The 1% Visit El Barrio” showed Melendez outside of one of MNN’s properties saying:

“Our people, our people, people of color, are in control of this building and I have to wait until they are fired, or they retire, or someone kills them so that I can come and have access to the facility here.”

In arguing that the Supreme Court ought to take the case, MNN said the high court could use the case to come out with a perhaps definitive policy governing how social-media companies regulate content on their platforms.

The New York-based U.S. Court of Appeals for the Second Circuit ruled in favor of Halleck and Melendez, finding that the public-access channel on which they appeared “is the electronic version of the public square.”

“The employees of [MNN] are not interlopers in a public forum; they are exercising precisely the authority to administer such a forum conferred on them by a senior municipal official,” U.S. Circuit Judge Jon Newman wrote.

Members of the Supreme Court voted at their private conference Oct. 12 to review the case. This was the first such conference that new Associate Justice Brett Kavanaugh participated in.

Amy Howe at SCOTUSblog described the case, an appeal from the Feb. 9 decision by the Second Circuit, known as Manhattan Community Access Corp. v. Halleck, as “relatively low-profile but potentially significant,” because it implicates the free-speech guarantees of the First Amendment to the U.S. Constitution.

In the matter before the high court, the Second Circuit determined that the private operator of MNN, a public-access cable television network of seven channels in New York City that doesn’t receive government funding, was a “state actor.”

In this context, a state actor is someone or something capable of being sued for infringements of the First Amendment because it is acting on behalf of a government.

MNN exists because of a New York regulation that forces cable-TV networks with 36 or more channels to provide “at least one full-time activated channel for public-access use.” Such a channel or channel must be open to the “public on a first-come, first-served, non-discriminatory basis.”

According to court documents filed, Howe writes, the Second Circuit’s ruling “not only ‘threatens the viability’ of ‘public-access channel operators around the country,’ but it also raises a broader question: whether private property can be a public forum, a place traditionally open for public speech and debate, where the protections of the First Amendment are the strongest.”

This is important, according to a friend-of-the-court filing by Chicago Access Corporation, a foundation that runs public-access TV channels in that city, because “courts are increasingly being asked to consider whether privately owned internet platforms like Twitter and Facebook can ever be public forums.”

Oral arguments in the case haven’t yet been scheduled.