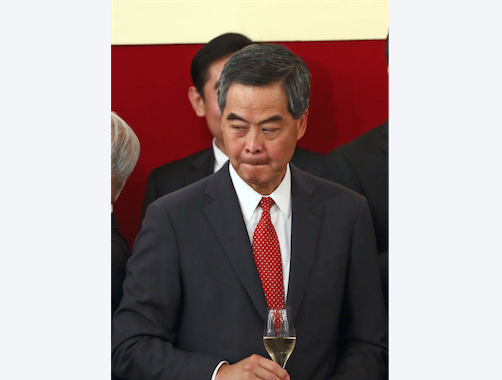 On Sept. 12, Zhang said, “[Hong Kong’s] Chief Executive has a special legal status which is above the executive, legislative, and judicial branches. He holds the core position in the execution of the power of the Special Administrative Region. He is accountable to the central government but above the three branches in the SAR.”

His comments drew quick responses from the political and legal circles. Geoffrey Ma Tao-li, Chief Justice of the Court of Final Appeal, emphasized that the Basic Law stipulates the independence of the judiciary, and everyone is equal before the law.

Secretary for Justice Rimsky Yuen pointed out that Hong Kong’s executive organ is subject to the monitoring of the legislature and judiciary, and the spirit of “separation of powers” has always been manifested in the verdicts handed down by the Court.

As a Special Administrative Region in China, Hong Kong’s legal position is confirmed by the Sino-British Joint Declaration and the Basic Law. Apart from affairs related to national defense and foreign policy, Hong Kong enjoys a high degree of autonomy in the executive, legislative, and judicial branches. It is a system based on the principle of separation of powers.

Therefore, the unexpected claim by Leung and Zhang, who is a mainland Chinese official based in Hong Kong, that the Chief Executive has superior power obviously contravenes both the Sino-British Joint Declaration and the Basic Law.

As an international financial and trading hub, developments in Hong Kong will affect many other countries. Like Hong Kong and China, other countries also have an interest in ensuring the territory’s social stability and economic prosperity. This can only be achieved if an independent judiciary is enforced in Hong Kong.

To celebrate this event, Britain has set up a special committee to organize various activities to highlight its importance. Many international media have also featured special reports on the Great Charter.

The claim made by Leung and others that the Chief Executive has superior power is therefore completely out of step with the international climate.

The Magna Carta laid the foundation for the protection of personal rights and liberties, and legitimately restricted the excessive power of the government. The rule of law, but not the will of the government, was the Magna Carta’s spirit. It has also become an important cornerstone of modern civilization.

Following the signing of the Magna Carta, the idea that the king must act in accordance with the law gained increasing currency and became a core principle that cannot be violated in Britain. During Henry III’s reign in 1216-1272, English cleric and jurist Henry de Bracton once made the famous comment, “The king has a superior, namely, God. Also the law by which he was made king.”

Hong Kong has inherited Britain’s legal tradition. Saying that the Chief Executive has superior power obviously opposes this tradition. It is a poisonous idea that originates from the devilish nature of the Chinese Communist Party (CCP), and it is unacceptable to modern civilization.

The CCP is a cult that worships the evil force of violence and revolution. Waving the banner of atheism, it pays no respect to deity and is unrestrained by any moral standards, while glorifying itself for “breaking through any barriers for the sake of liberation.”

The CCP overthrew the legitimate Republic of China by violence and established a regime that is “above” all morality, law, and human conduct. It then proclaimed itself as the center of this violence-based regime.

It is therefore no coincidence that the idea that the Chief Executive has superior power almost certainly owes its source to the CCP’s self-proclaimed superiority that stems from its demonic nature.

In a normal society, the law is based on rationality, which originates from deity. Fundamentally, laws governing human societies must follow some basic principles.

Any person, including the government, must obey the law. In modern societies, though the holiness of the law is not as evident, its enactment must be based on a well-defined legal procedure and preceded by adequate debate and discussions. It must also be in harmony with the society’s moral standard.

However, under the CCP’s rule, those in power can brush aside all moral and legal standards. They can pass any laws and overturn them to suit themselves as the situation changes. All these really originate from the CCP’s evil anti-humankind and anti-universe nature.

The CCP’s devilishness has reached its peak, and obvious signs are emerging that its downfall is imminent. It is facing grave crises on both the economic and political fronts.

People like former CCP leader Jiang Zemin and his close supporter Zeng Qinghong, who are known as “the ultimate big tigers,” are faced with a great risk of being arrested.

Leung Chun-ying and others who cooked up the “supremacy of the Chief Executive theory” are struggling desperately to use Hong Kong as a pawn to hijack the future of China and the world by threatening to destroy the territory as a last attempt to save themselves from destruction.