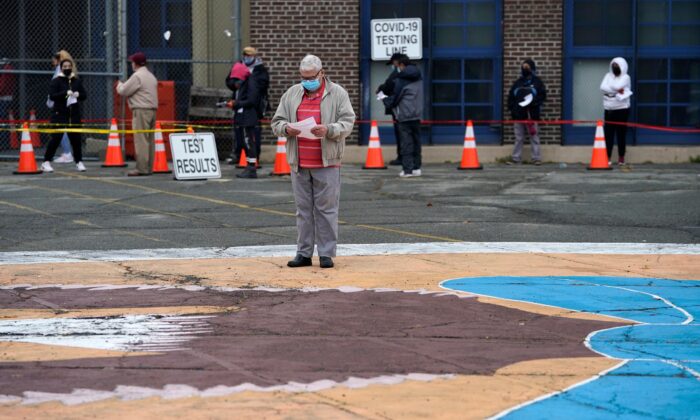 People wait in line to get tested for COVID-19 at the Ann Street School Covid-19 Testing Center in Newark, N.J., on Nov. 12, 2020. (Timothy A. Clary/AFP via Getty Images)
Viewpoints

Suppressing Medical Debate Over COVID-19 Will Only Prolong the Disease

If the Pfizer vaccine clears the remaining regulatory hurdles, it will vindicate the Trump administration’s “Operation Warp Speed,” which mobilized the federal public health bureaucracy to approve vaccines and other treatments in record time.

The prospect of a vaccine just around the corner comes at a time when the public discussion over how to deal with the pandemic has become politicized to the point that dissident opinions, however well-argued and supported by real-world data, are being attacked. Just as the moniker “climate deniers” is routinely hurled at scientists questioning the theory of human-caused global warming, those recommending therapies and other measures out of step with received opinion are met with a barrage of slings and arrows.

A case in point is the reaction to the Great Barrington Declaration released in early October by infectious-disease experts at Harvard, Oxford, and Stanford and signed by 11,930 medical and public health scientists and 34,425 medical practitioners around the world.

Calling their approach “Focused Protection,” the declaration’s authors recommend concentrating efforts on the most vulnerable—the elderly with underlying conditions—while allowing others to lead more or less normal lives until, either through vaccines or other therapies, herd immunity is reached. They point to the collateral damage of government-imposed lockdowns which “include lower childhood vaccination rates, worsening cardiovascular disease outcomes, fewer cancer screenings, and deteriorating mental health—leading to greater excess mortality in years to come, with the working class and younger members of society carrying the heaviest burden.”

Keeping these measures in place until a vaccine is available,” they add, “will cause irreparable damage, with the underprivileged disproportionately harmed.”

The declaration’s recommendations were quickly met with derision in certain quarters.

“There has been some discussion recently about the concept of reaching so-called ‘herd immunity’ by letting the virus spread,” World Health Organization (WHO) Director-General Tedros Adhanom Ghebreyesus said in an Oct. 12 address. “Never in the history of public health has immunity been used as a strategy for responding to an outbreak, let alone a pandemic.”

In its Oct. 17 lead editorial, “A Dangerous Declaration,” The Washington Post picked up the theme of herd immunity.

“Allowing the virus to run riot in pursuit of this chimera means deliberately putting down the tools that now exist to save lives in the interim period before an effective vaccine or drug therapy arrives,” the newspaper wrote.

Two days later, the Post ran an op-ed by Tom Frieden, who headed the Centers for Disease Control and Prevention (CDC) during the Obama administration.

“The route to herd immunity would lead through graveyards filled with Americans who did not have to die, because what starts in young adults doesn’t stay in young adults. ‘Protecting the vulnerable,’ however appealing it may sound, isn’t plausible if the virus is allowed to freely spread among younger people,” Frieden wrote.

What these critics of the declaration have in common is portraying herd immunity as a costly strategy to suppress the virus when, in fact, it is the goal. Herd immunity, also known as “public immunity,” denotes the point at which the rate of new infections is stable. The declaration’s authors are simply arguing that the measures taken to suppress COVID-19 haven’t only failed but have themselves undermined public health and destroyed livelihoods.

As the authors put it: “Our goal should therefore be to minimize mortality and social harm until we reach herd immunity.”

“It is what naturally occurs if a species is to survive,” she said.

“We do not ‘allow’ a virus to ‘run wild.’ Viruses proliferate until they have no susceptible hosts,” she said. “We can quarantine infected persons to contain a small outbreak. But once it is widespread in a community, treatment and immunity are needed to stop it. If it is transmitted in aerosols through toilet flushing or transmitted through HVAC systems, it will not be stopped by masks, distancing, or plexiglass bubbles. Many people have caught this while imprisoned home alone.”

The collateral damage caused by severe lockdown isn’t limited to the United States. In the UK, the Office of National Statistics reports that in England and Wales nearly 33,000 more people have died in their homes in the first nine months of this year than in the five-year average for that period—and only 9 percent of those deaths were due to the coronavirus. Argentina imposed strict lockdowns to suppress the virus but has seen cases skyrocket from 200,000 in early August to 1.1 million today—1 in every 44 people—while registering 28,000 COVID-19 deaths.

With new cases and hospitalizations on the rise in the United States, Joe Biden, who currently leads in the unofficial tallies for the presidential election in several swing states, has announced creation of the Transition COVID-19 Advisory Board. While the board has yet to take a position on lockdowns, one of its members, Dr. Michael Osterholm of the University of Minnesota, has made his views clear.

On Nov. 11, he called for a hard, four- to six-week national lockdown. While acknowledging that lockdowns haven’t worked before, he said that’s because “it was not uniformly stringent across the country … the lockdown has to be as comprehensive and strict as possible.”

Another board member, Obama administration health care adviser Dr. Ezekiel Emanuel, told MSNBC on June 30: “You have to actually have people at home, close nonessential businesses, stop bars, stop indoor eating, have everyone wearing face masks. These are the things we need to do. And, by the way, just doing it in isolated places is not going to solve it either. You need to do it nationwide.”