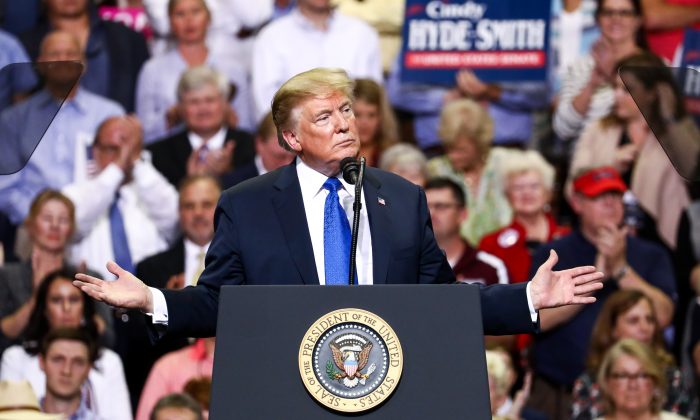 SOUTHAVEN, Miss.—As President Donald Trump wades through a myriad of foreign policy matters, his supporters weigh in on how he’s doing on the global front.

From North Korea to NAFTA, the general consensus at an Oct 2. Make America Great Again rally in Mississippi is that Trump is succeeding in representing America’s interests.

“We’re no longer apologizing for being America,” said truck driver Larry Davis, referring to former president Barack Obama’s overseas trips that were dubbed by critics as part of an “apology tour.”

Davis said Trump is asserting American might in positive ways, “not trying to be bullies.”

“I think that [Trump] asserts traditional American values and not a globalist type attitude,” Davis said. “With the last administration, we were leaning toward socialism, and I think that’s been rejected now.”

Davis identified the traditional American values being espoused as “be the best, the strongest; be the place that other countries can look to; be the place that if you don’t have any place else to go, you can still go to America … the shining city on the hill, as long as you come here legally.”

Aside from foreign policy wins, Davis is happy with the economy.

“With the ease up in regulations, businesses have been free to expand and hire,” he said, adding that business is booming in the trucking industry.

Mark Seay, 55, works in retail distribution, and said he has challenged people to go to the store and see how many items are made in America now.

“It’s not. You can’t go to the store and find anything hardly that’s made in the USA. It’s made in Mexico, it’s made in China,” Seay said. “So we have dug ourselves a hole. And in 18 months, [Trump] has turned a lot of that around from a domestic standpoint. I believe that we’ve come a long ways. So I’m really excited about that.”

Seay touted the revamped NAFTA agreement, with Canada coming to the table right before the deadline, as a major win for the United States.

“Trump is a negotiator, he’s very good at it,” he said. “We didn’t negotiate NAFTA well. Of course, there’s a lot of blame to go around—there’s Republicans and Democrats that voted for that—but it was a terrible deal for us.”

Seay said Trump is putting the right kind of pressure on countries like China with the tariffs, and Iran with the sanctions, and eventually “they’re all going to have to say ‘uncle.’”

He identified thawing relations with North Korea as a big step forward in foreign policy after previous administrations tried to engage with dictator Kim Jong Un and his father, but failed to make headway.

“And [Trump] has brought him to the table, and it looks like there is a lot of positive things goin’ on there,” he said. “I’m also real excited about what’s going on in the Middle East. That’s a situation that’s very volatile and continues to be, but I see things that seem to be calming down and I see some progress being made.”

Seay agrees with using sanction pressure on Iran to restructure the nuclear deal, which he called “terrible.”

“I’m glad that we’re doing something about that because we don’t need Iran with a nuclear weapon. Period.”

Retired customer service employee Debbie McAnally said she agrees with everything Trump is doing in regard to foreign affairs.

“I think that he’s stepping up and doing everything he said he was going to do,” she said, specifically mentioning North Korea and the trade deals with Mexico and Canada.

She said the president’s style of approaching issues helps get things done.

“I think it is because he’s out there and he’s different … and I think that’s what the people like about him … he’s got a charismatic personality. But, the main thing is he does what he says he’s gonna do,” she said. “I think you have to sometimes do some difficult things, make some difficult decisions, that benefit later.”

Larry Walker, 34, dressed in his most patriotic garb for the rally.

“Other than the fact that I wanted to show how much I love this country, I knew a lot of people would also appreciate it,” he said of his colorful ensemble.

“Well, based off the fact that he’s ending some of the terrible deals that we’ve had and … attempting to get us the best deals possible. I mean it’s far better than what we’ve been getting,” he said.

He said Trump’s approach of “no more” and “don’t test us” with North Korea has been effective.

“He got very positive results, and most people thought it would get very negative results,” he said. “He had a much different approach. He’s in your face and to the point. He doesn’t like to play the politic game. And I think that’s not something people are used to, and they don’t know how to react to it.”

Vietnam veteran John Andol, 63, said Trump has accomplished more than previous presidents, and he attributes it to the president’s business mentality.

“He’s a businessman—he has to back up what he says. So far, he’s backed up everything,” Andol said.