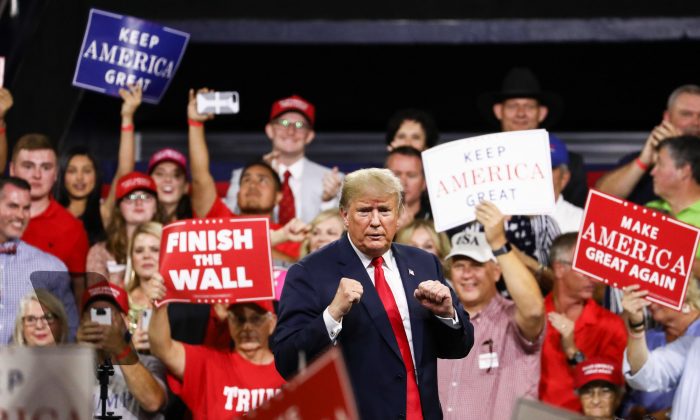 JOHNSON CITY, Tenn.—President Donald Trump has been wrangling with a bevy of countries over trade deals he says have been hugely unfair to the United States for many years.

So far, he’s inked a new deal with South Korea during the United Nations summit in New York on Sept. 24, and reached an agreement with Canada and Mexico on Sept. 30 to replace NAFTA. He’s ready to negotiate new deals with the EU and Japan, and is conducting a pre-negotiation trade war with China.

Supporters at a rally in Tennessee on Oct. 1 weighed in on the president’s performance on trade so far.

“In order to have any kind of real change, you got to make waves and see how it shakes out,” he said, mentioning the ongoing tariff spats. “We’ve sent so much of what we do to other countries, if we don’t make the waves to have a reason to bring it back here, it will never correct itself.”

Overcash said his business works with a lot of steel and was affected by the first tariff tiff with China.

“They counter-tariffed back, which it’s just a small part, but all my prices shot up, so it shot up for all my customers,” he said. “I think we can absorb it for a better deal later on. I think we’re wealthy enough as a country and as individuals to eat it.”

He sees it as doing his part toward strengthening America’s position in trade and for the long-term benefit, “for my grandchildren.”

He’s happy with Trump’s performance so far “because he keeps going after it, he doesn’t let the negative drag him down.”

Brandi Adams, who owns a sawmill with her husband in Robbinsville, North Carolina, praised Trump on trade.

“I think he’s looking out more for the American people instead of the way it used to be, worrying about the other countries,” she said. “I don’t think that the presidents before had enough nerve, enough backbone.”

Adams said that before Trump was elected, her sawmill business was in a precarious position.

“We were about to go under, to be honest. It was just me and my husband for it. We had nothing to fall back on, that was all we had. And we’re in a very small town right on the Tennessee line,” she said.

She said she and her husband prayed one night, and Trump became president not long afterwards.

“We are debt-free now, our company is paid for, my husband is a full-time pastor, and he’s looking to retire next year to where he can take the church full-time,” she said.

Adams attributes the business turnaround directly to Trump’s success in reviving the economy, adding that she “proudly” voted for him.

“I think [Trump] just loves America, he loves everything that we stand for. And over the last few years we got away from that. He wants to take us back to the way America was established, the way it should it be, what we were founded on,” she said. “We were founded on God. That’s why it’s on our money, ‘In God we Trust,’ and I think that’s what he’s trying to get us back to.”

The Navy veteran said the new deal with Mexico and Canada is a strong move that will enhance jobs and bring in other trade.

Hall said he works for Bristol Metals in Bristol, Tennessee, which is “booming” after an eight-year lull. He said the company operates a profit-share arrangement that hadn’t paid out much under the last administration, but is now very strong.

Hall said some of the longer-term employees are now averaging $3,000 every quarter of profit sharing.

“That’s nothing to laugh about. Rarely do you see that. I’ve worked for other companies where you got profit share as well [and] in the last eight years, you might got $200 a year,” he said.

“So it’s a substantial difference. And you’re taking that money and you’re going out buying the things you need or things you want, which puts back in your local economy,” he said. “Then that turns around and grows things on a national basis—so it’s from East Coast to West Coast, north and south.”

Hall said the way Trump is wrestling with China on trade is smart, and that previous administrations have been too passive.

“[Trump’s] doing something that’s very important to us and … China has undermined us for years. On top of the fact they might be ‘borrowing’ security information from us,” he said.

He said the tariffs are starting to hold China accountable.

“Sooner or later, they’re going to have to come to some kind of agreement, because their economy will falter.”

Linda, who declined to give her surname, said she trusts Trump’s business acumen on trade.

“He’s a businessman, he loves this country, and I think he will do what’s best for the country and the people,” she said.

“We all pay taxes, so we‘re all in it together. So if it means tariffs in order to make the economy better, then I’m all for it. Everybody has to pay. Everybody’s going to have to pay to make the country better.”

She is an executive assistant for a manufacturing company in Virginia that serves 17 nearby counties. The coal and steel industries are among its clients.

“It’s wonderful that coal is coming back, we need that. And the steel industry,” she said. “This country is built on skilled workers, and we need those skilled workers back in jobs. We need to build our country back and that goes with hard work.”

Del Oakes, an electrician from Johnson City, said the push for better trade deals is great. He said his business has also seen an uptick in lockstep with the improving economy.

He predicts the midterm elections will turn out well for Republicans.

“I think this Kavanaugh thing—Democrats have pushed too far on it, and I think it’s going to turn against them in the midterms,” he said.

Mike Waller said Trump is the “best president ever” and says his approach on trade is “absolutely wonderful.”

The retired Army veteran, who lives in Knoxville, Tennessee, said he appreciates that Trump is playing “hardball” with the tariffs.

Waller said the “Trump movement—this movement he started—is running off into other countries,” citing Poland as an example. The United States is considering opening a Russia-facing military base in Poland.

Waller described the Trump movement as “waking up the sleeping giant, the sleeping majority; he had the stick to wake everyone up.”

Rita Eveland agreed, saying the movement is a “sleeping giant.”

The retiree from Nashville, Tennessee, said Trump’s success is because he is “a real person.”

“He’s not a career, bred-from-birth politician. He’s worked real jobs and cares about real people,” she said. “The average politician in Washington can’t tell you how much it costs to buy a gallon of milk in a store. They don’t care, they live in a bubble. They’re not in touch with us at all; they’re totally out of touch with the American people.”

Eveland said her grandparents were immigrants from Hungary who worked hard to get by.

“Nobody gave them a free ride to anything. My grandfather was a college professor and came over here and worked in the coal mines in Pittsburgh,” she said. “That’s the stuff of real Americans. Americans are hard-working, realistic, good people.”

Becky Cline, 45, and Tiffany Short, 30, had matching t-shirts made specifically for the rally that said “Chicks for Trump 2020.”

“We wanted to be a little individual, instead of Women for Trump, we wanted to do a little something for it,” Cline said. “We’re from a small, poor area, so we just went for something a little more rural.”

Both women work in manufacturing for a medical supplier and live in Rose Hill, Virginia.

Cline said the benefits from the new trade deals will take time to manifest, “but I think it’s great to be competitive with the rest of the world.”

She lauded Trump’s approach to China.

“I think it’s great, it’s about time. He just doesn’t back down, he lets them know this is where he stands and that’s how he stands. I think we needed that,” she said.

“I don’t think no one wanted to take on that challenge yet,” she said. “[Trump] is a businessman, he knows how to run a business. so he knows this is an important aspect for America, because it will help us get out of debt.

“I just wish everyone would give him a chance to do stuff, instead of fighting him tooth and nail.”