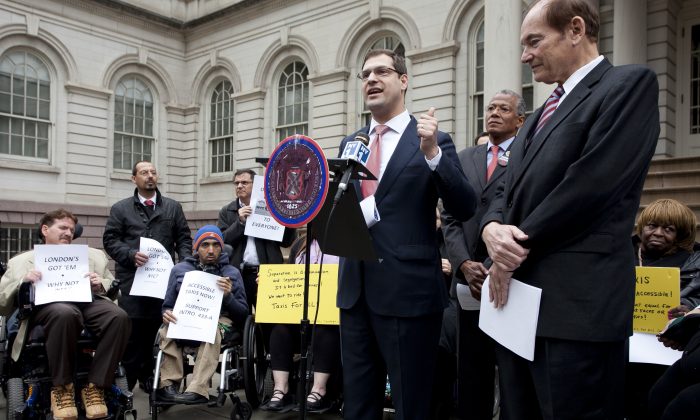 Bill’s sponsor says modifications to the bill are reasonable, but accessibility-advocates disagree
By Kristen Meriwether

NEW YORK—Council member Oliver Koppell stood on the steps of City Hall six weeks ago surrounded by New Yorkers in wheelchairs desperate to have equal accessibility rights to taxicabs. They rallied together in favor of the bill championed by the council member, which would mandate all new taxis be wheelchair accessible.

The council member vowed to continue his two-year fight on their behalf, and he has, but now wheelchair-accessibility advocates are no longer as keen to support the bill. Koppell says he needs their support again before he can move forward.

Koppell has already gone up against City Council Speaker Christine Quinn who refused to bring the bill to a vote, by invoking his sponsor’s privilege and forcing the bill back into committee for a hearing. If he could not get the bill out of committee, Koppell promised to take it as far as getting a motion to discharge—yet another way around the Speaker—to ensure the bill passed.

“I think this bill is well overdue,” Koppell said at the April 18 rally. “This is a civil rights issue. It has been too long.”

A hearing was held after the rally, and weeks of negotiations between Speaker Quinn’s office, Koppell, and advocates ensued, leaving the bill modified from the form presented at the hearing. Following modifications to the bill, relations between the advocates and the council member have cooled and Koppell lacks the support to force the bill to a vote.

“I don’t think it will go through without the support of the advocates because I don’t think the Speaker, or I, will want to pass a bill that will then be criticized as being inadequate,” Koppell said in an interview at City Hall on Thursday. “If the advocates say they will support the bill, I will put it out.”

Edith Prentiss, who chairs the Taxis for All campaign and worked with Koppell on the bill, said her organization could not support the latest version. She says Koppell sold them down the river.

She is at odds with the proposed three-year study attached to the latest version, which is meant to evaluate the durability and cost effectiveness of the modified Nissan NV200, also known as the “Taxi of Tomorrow.” The NV200 is only wheelchair accessible with a $14,000 post-manufacture modification.

If the study finds the cost of modifying the taxis is more than 5 percent of the taxi’s purchase price, the bill would not go through.

“It is a little offensive to have my life’s transportation held to a financial threshold,” Prentiss said in a phone interview on May 20. Prentiss also said she did not agree with the the Taxi and Limousine Commission, which is the agency responsible for licensing and regulating the taxi industry, being in charge of the study, claiming it could not have an objective view.

Koppell defended the study, saying issues brought up in an April 18 hearing were not something he expected, including cost increases in fuel and insurance premiums. He was also unaware there is a chance the modified NV200 will have to be replaced more often because of the modifications.

With taxi medallions, which are required licenses to operate a yellow taxi in New York City, costing roughly $1.2 million each, Koppell considered the additional costs to an already expensive investment warranted a study to find the actual costs.

“Can I, Olive Koppell, say I am going to devalue your investment by hundreds of thousands of dollars by passing something I don’t know what the effect is going to be on people, who in good faith, invested their money?” Koppell asked. “I don’t think that is fair. I don’t think the requirements I placed are fair.”

Koppell’s use of sponsor’s privilege was not warmly received by the Speaker, according to Koppell. However, he said there was no pressure from Quinn to modify the bill so it would not pass.

“The Speakers Office suggested we talk to the industry and we did. That is not pressure,” Koppell said. “The concerns raised by the industry are reasonable concerns. I think I put a very reasonable proposal out.”

Koppell claims the only roadblock in getting the bill to a vote is the very people who will benefit from the bill.

“I am deeply disappointed at the advocates,” Koppell said.

Koppell said someone from an advocacy group emailed him a copy of an op-ed piece published in the Daily News on May 29 by J. Whitney Stevens, which described mobility as a right, not a privilege.

“I wrote back and said look, you have a chance to get a law that says all cabs should be accessible,” Koppell said. “Why are you not taking that chance? It may never come up again.”