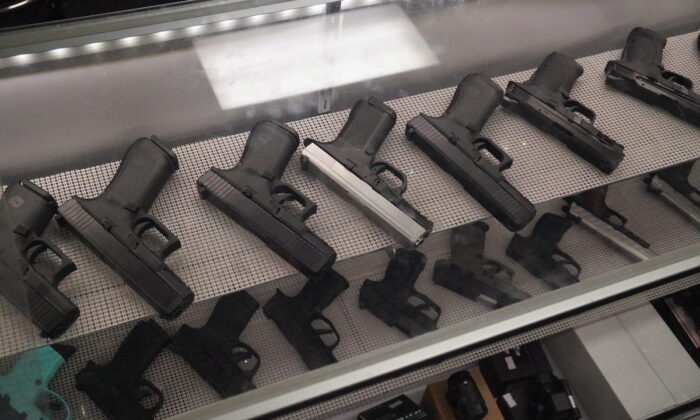 According to a new Gallup poll, support for stricter gun control has fallen by 15 percentage points in just the past five years. But, despite the drop being driven by independents’ changing views, Democrats aren’t likely to rethink their support for more gun control. The partisan divide on this issue has never been so large—91 percent of Democrats and only 24 percent of Republicans support stricter laws.

While Democrats claim they want “reasonable” or “common sense” laws, you get an idea of how stark the partisan differences are by considering the response to Gallup’s question about whether people support a complete ban on civilian ownership of handguns: 40 percent of Democrats like the idea, compared to only 6 percent of Republicans.

The recent election results in Virginia and New Jersey show that Democrats are in real trouble with rural, working-class voters. Some pundits put part of the blame on the party’s constant push for gun control.

You can see the opposing views in the reactions to the Kyle Rittenhouse verdict. Democratic New York Gov. Kathy Hochul tweeted the lesson she took from it: “If there was any question about why we need strong gun safety laws, this is your answer. This should never have been allowed to happen in the first place.”

“This entire tragedy [with Rittenhouse] makes the case that we should not allow our fellow Americans to own and use weapons that were originally designed for battlefield use,” said Texas gubernatorial candidate Beto O’Rourke. “That AR-15, that AK-47, has one single, solitary purpose, and that is killing people as effectively, as efficiently, in as great a number, in as little time as possible. We saw that in Kenosha.”

O’Rourke calls AR-15s “weapons of war,” but he appears unaware that these guns fire the same bullets, with the same rapidity, and do the same damage as a small-caliber hunting rifle. They just look like military weapons.

The New York Times ties the AR-15 that Rittenhouse used to the assault weapon ban that lapsed in 2004 because Republicans “blocked its renewal.”

Meanwhile, Republicans have generally viewed the case as showing the benefit of guns for self-defense. They point out that the person Rittenhouse wounded admitted on the witness stand that he was shot only after he pointed a handgun directly at Rittenhouse. Another had struck Rittenhouse in the head with a skateboard and was going to do so again before Rittenhouse shot him.

You can also see the partisan gap in a new Rasmussen survey. While Democrats support a national registration system by a 64 to 25 percent margin, Republican opposition is the mirror image (27 to 63 percent). Sixty-four percent of Republicans fear that registration would mean the government will “eventually confiscate all guns.” They need not be conspiracy theorists to believe that, as 40 percent of Democrats agree.

The Washington Free Beacon obtained a leaked document this month showing that the Biden administration has already compiled the records of more than 54 million U.S. gun owners. They are also drastically changing Bureau of Alcohol, Tobacco, Firearms, and Explosives regulations to ensure that the federal government collects all licensed dealer information on their customers.

It isn’t hard to see why so many Americans fear that eventual confiscation is the end game. Under the label of “reasonable” gun control laws, Democrats keep pushing rules to end private firearm ownership.

Do you think that’s hyperbole?

Look no further than President Joe Biden’s nominee to head the Office of the Comptroller of the Currency, Saule Omarova. She calls for “debanking” of what she claims are “socially sub-optimal industries.” It’s a revival of the Obama administration’s “Operation Chokepoint,” where the Federal Deposit Insurance Corp. (FDIC) pressured banks into closing businesses’ accounts. Try running a company without someone to handle credit cards, lines of credit, check cashing, and other things that financial institutions do.

Or take Biden’s “zero tolerance” policy toward what he calls “rogue” gun dealers. No policymaker wants dealers to secretly sell guns to criminals out of the back of their store. But that’s not what Biden is going after. Even one mistake in paperwork, no matter how trivial and inconsequential, now means the loss of one’s license and the end of one’s business. When Biden talks about 5 percent of the gun dealers selling 90 percent of the guns found at crime scenes, he ignores the fact that 95 percent don’t.

The one common feature of these and many other proposals is to make owning a gun more costly and less common—thus driving gun makers and sellers out of business.

The Biden administration and other Democrats, even those in conservative states such as Texas or Montana, show no intention of changing course. Republicans see Democrats releasing violent criminals on little or no bail, refusing to prosecute violent criminals, and defunding the police. The Democrats’ sole focus on gun control ignores that 92 percent of violent crime has nothing to do with guns.

Republicans believe that Democrats either don’t understand what works or don’t really care about reducing crime.